An officer in riot gear stands between supporters of President Donald Trump and counter protesters as the groups yell at each other outside of the Georgia State Capitol in Atlanta on Nov. 21, 2020.

As a longtime observer of Georgia politics, I am at a point where I can no longer distinguish trolling from earnest madness.

A hashtag began trending this morning on Twitter: #WriteInTrumpForGA. You could probably have seen it coming as soon as Lin Wood, a Trump attorney arguing to overturn the election results here, tweeted his support for a boycott of the U.S. Senate runoff elections.

Why are they doing little or nothing to support efforts by GA citizens to address unlawful election & need for @BrianKempGA to order special session of legislature?

If not fixed, I will NOT vote in GA runoff.

But far-right protesters had been calling for it in the street even before Wood’s comment. Vincent James Foxx took to the steps of the Georgia capitol last week to tell “Republican traitors” who are not trying to overturn the election that “we will not be willing to show up for them.”

Nonetheless, video of his commentary went viral, though probably not the way he might have liked. Virtually all of the engagement has been with progressive commenters wishing him well here.

If Jon Ossoff beats Sen. David Perdue and Raphael Warnock beats Sen. Kelly Loeffler in the January runoff, Democrats take control of the Senate. So, the reaction on the left both locally and nationally has been giddy, gleeful support for the proposition of a far-right boycott. 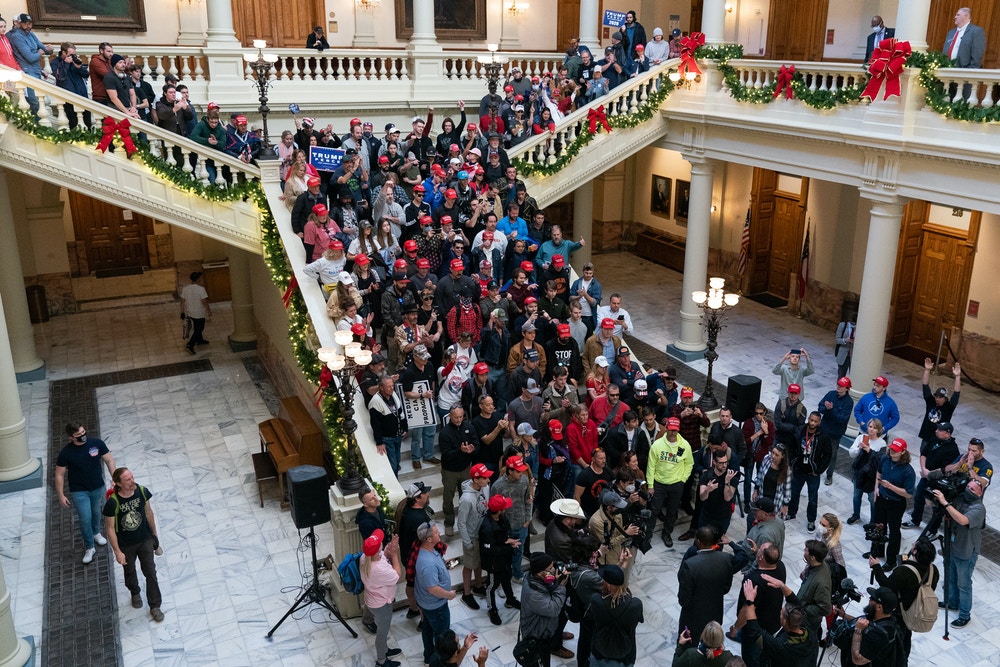 Alex Jones, host of Infowars, an extreme right-wing program that often trafficks in conspiracy theories, speaks at a “Stop the Steal” rally against the results of the U.S. Presidential election inside the Georgia State Capitol on November 18, 2020 in Atlanta, Georgia.

Georgia Secretary of State Brad Raffensperger noted in an interview with the Atlanta Journal-Constitution last week that 24,000 Republican voters submitted absentee ballots in the June primary and refrained from voting in the general election — enough voters to have closed Biden’s margin in Georgia.

Typically, a runoff election in Georgia might draw as few as 20 percent of the voters from the general election. More important jobs draw a higher proportion of voters, as happened in 2018 when Raffensperger himself faced a runoff contest against John Barrow, where about 40 percent of voters returned. The last U.S. Senate runoff here in 2008, between Republican Saxby Chambliss and his Democratic challenger Jim Martin, drew about 60 percent of general election voters.

The question to ask is if 30,000 people who would vote for Republican candidates are open to an argument for a boycott.

Chambliss won the runoff handily. But given recent election trends in Georgia, with Democrats so focused on turnout, one might hold presumptions of Republican victory less strongly. If total turnout in January is around 3 million votes, a 1 percent gap would be 30,000 voters. The question to ask is if 30,000 people who would vote for Republican candidates are open to an argument for a boycott.

Are people like Wood and Foxx sincere? To the degree that one can measure the sincerity of such people . . . probably. Sure. I’m guessing that Wood is trying to set up former Georgia congressman Doug Collins for a right-flank challenge to Loeffler or Warnock in two years, or perhaps against Georgia’s Republican governor Brian Kemp.

Foxx’s deeper motivations might be a bit more nuanced. Set aside his stated reasons for a moment: his fallacious belief in a stolen election and a demand for Republicans to spend their political capital fighting it. And ignore for a moment their general contempt for “democracy” as a political value. Biden’s win means some Republicans will recalculate their electoral math, asking if courting white nationalists loses them more elections than they will win.

The far right has been in a rolling crisis ever since the “Unite the Right” rally in Charlottesville provoked a massive, world-changing backlash. White supremacist groups have been falling apart from lawsuits, the rolling identification of their leaders, social media deplatforming and infighting. People like Foxx have had some access to power over the last four years. A call to boycott is a loyalty test, and loyalty tests are deliberately painful: do this distasteful thing – disregard the law and voters – to prove you still listen to us, or we will show you what that will cost you.

Trump himself reiterated support for Loeffler and Perdue the week after the election. Yesterday, Donald Trump Jr. described calls to boycott as “nonsense” and asked people to ignore them. Neither Loeffler nor Perdue have addressed the idea directly.

Nonetheless, social media chatter about a boycott is continuing to grow. On Parler, the hashtag #boycottgeorgiarunoffs doubled its traffic overnight. But most of the accounts pushing it are brand new and utterly anonymous. Parler’s conservative supporters tout its unmoderated forum as an alternative to Facebook, but as a practical matter it is completely susceptible to manipulation by political provocateurs.

Despite its supposed noninterference policy, Parler began striking the #WriteInTrumpForGA hashtag today. Perhaps that’s because under Georgia election rules, you can’t actually write in a candidate in a runoff. Even if you could, a write-in candidate has to be qualified by the Secretary of State’s office for the votes to count. And Donald Trump is a legal resident of Florida, and would not be eligible regardless.

The idea is absurd. But that’s where we are now.