Pacific Media Centre Newsdesk Campaigners at a TAPOL-hosted global webinar have called on the people of Australia, New Zealand, United Kingdom, United States and other countries to stop funding military training for Indonesian security forces who are “killing innocent West Papuans”. Rosa Moiwend, a member of the War Resisters International, said West Papuans wanted to live peacefully without any oppression by the military – this was the hope of the indigenous Melanesian people. “If your government is actually behind this scenario, I think the main thing you have to do is to go and talk to your government, Parliament members and question them about your tax money,” she said. “Where does your tax money go? Does it go to pay [for] the war or is the tax money used for the purpose of human lives?” Moiwend said many people across the world loved peace and justice, so they were anti-military and war. Stopping governments funding military training was a must for activists. Moiwend, a strong Melanesian and Pacific woman, gave an inspiring message to activists around the world to stand up firmly and speak out about the arms business that was violating human rights and killing people everywhere, “including the lives of innocent West Papuans”. Sharing militarist experiences An organiser said a key objective of the webinar was to give an opportunity to lawyers, activists, and supporters of a Make West Papua Safe campaign to share their experiences of militarisation and militarised policing. Other speakers in the London-hosted webinar on Monday included Elijah Dacosta, a TAPOL campaigner; Yohanis Mambrassar, a lawyer for West Papuan human rights activists; Yones Douw, head of the justice and peace department of the Papua Kemah Gospel Church; author and researcher Jason MacLeod, co-founder of Make West Papua Safe; and Zelda Grimshaw, a Make West Papua Safe campaigner. TAPOL (Tahanan Politik) is a British-based organisation campaigning for human rights and democracy in Indonesia. “TAPOL was founded in 1973, and in the beginning the TAPOL campaign was focusing on releasing political prisoners in Indonesia,” said Dakosta. But later the seriousness of military occupation became increasingly important. “We have expanded to raise awareness on human rights issue in Aceh, East Timor and West Papua,” said Dakosta.

The Make West Papua Safe logo … campaign against Indonesian militarism. Image: PMC screenshot Yohanes Mambrasar, a West Papuan lawyer gave an illuminating description on what has been happening over human rights violence by state institutions towards indigenous people of West Papua. “There has been increasing repression. We are seeing violent actions by the TNI (Indonesian National Armed Forces) and police against unarmed peaceful civilians who are gathering to express their political aspirations. We can really see this increasing year by year, even month by month,” said Mambrassar. Human rights advocacy Mambrassar who has been working on human rights advocacy said that during 2019 and 2020 “we are seeing this crackdown on protesting West Papuans.” But they were also seeing a lot of violence towards villagers, who were suspected of supporting independence or having “separatist sympathies”, such as in Nduga, Intan Jaya, and other regions. He said the violence was now extended to the virtual world where some people who disseminated information on social media such as Facebook and YouTube would face cyber-attacks. They were even physically attacked by the police or armed forces. RNZ Pacific reports that Indonesian military denied shooting civilians in Papua. Papua’s police chief said that reports of a new military operation in the troubled Nduga regency were a “hoax”. 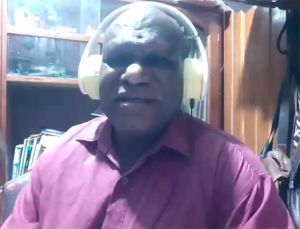 Church advocate Yones Douw … “right through until today the violence has continued.” Image: PMC screenshot However, Yones Douw, head of the justice and peace department of KIMI church (West Papua Kemah Gospel Church), said that violence had never stopped since Indonesia had occupied West Papua. “Really the violence has not changed since 1961 to 1969, 1969 to 2020, and 2020, when special autonomy was declared here in West Papua – right through until today the violence has continued,” said Douw. Douw, a human rights activist, said that when special autonomy was introduced, Jakarta said that West Papuans would be 90 percent independent. Promises ‘only words’ He said this was “only words – in fact, we have been seeing increasing violence”. “So, if special autonomy went the way it was supposed to, West Papuan people should be protected and cared for. But that has not happened at all,” Douw said. “Why is [the violence] increasing like this? Well, if you find a pastor who is speaking about the suffering of his congregation, he will be called a separatist. Anyone who speaks about human rights will be called as separatist, anyone who speaks about the welfare of Papuan people will be labelled as separatist,” he said. He said that the Indonesian laws granting freedom of expression did not hold in West Papua. Even journalists, human rights activists, and some church leaders could not work without feeling a sense of fear. “These are school students who are being shot, these are student who are walking around their own villages and without even any question they are being shot. “Imagine what it is like if you are an older person, there is just no freedom at all to move,” said Douw. 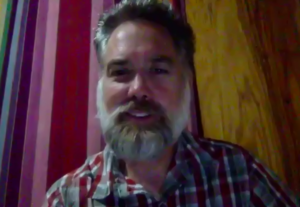 Author Jason MacLeod … responding to students’ “go to hell” message to the Australian and New Zealand governments. Image: PMC screen shot Stopping foreign support Jason MacLeod, co-founder of Make West Papua Safe, said he had collaborated with New Zealand activist Maire Leadbeater and Rosa Moiwend in launching this campaign. The campaign was “to stop foreign government support for the Indonesian police and military,” said MacLeod. He said it was a peaceful movement seeking to stop New Zealand and Australian government funding and training for the Indonesian police and military which every day brutally repressed the indigenous people of West Papua. Brisbane-based MacLeod, who has been working on West Papua issues for the last 30 years, said the motivation behind the founding of the Make West Papua Safe campaign was in response to students speaking out in Jayapura. Asked what they had thought about the New Zealand and Australian governments’ help for the Indonesian military, the students replied that both governments “can go to hell”, said MacLeod. The activists, lawyers, and human rights defenders called on the people in Australia, New Zealand, United Kingdom, United States, the Pacific, Africa, Caribbean, Europe and Asia to raise their voices support of stopping military oppression in West Papua. Contributed by a postgraduate communication studies student at Auckland University of Technology.