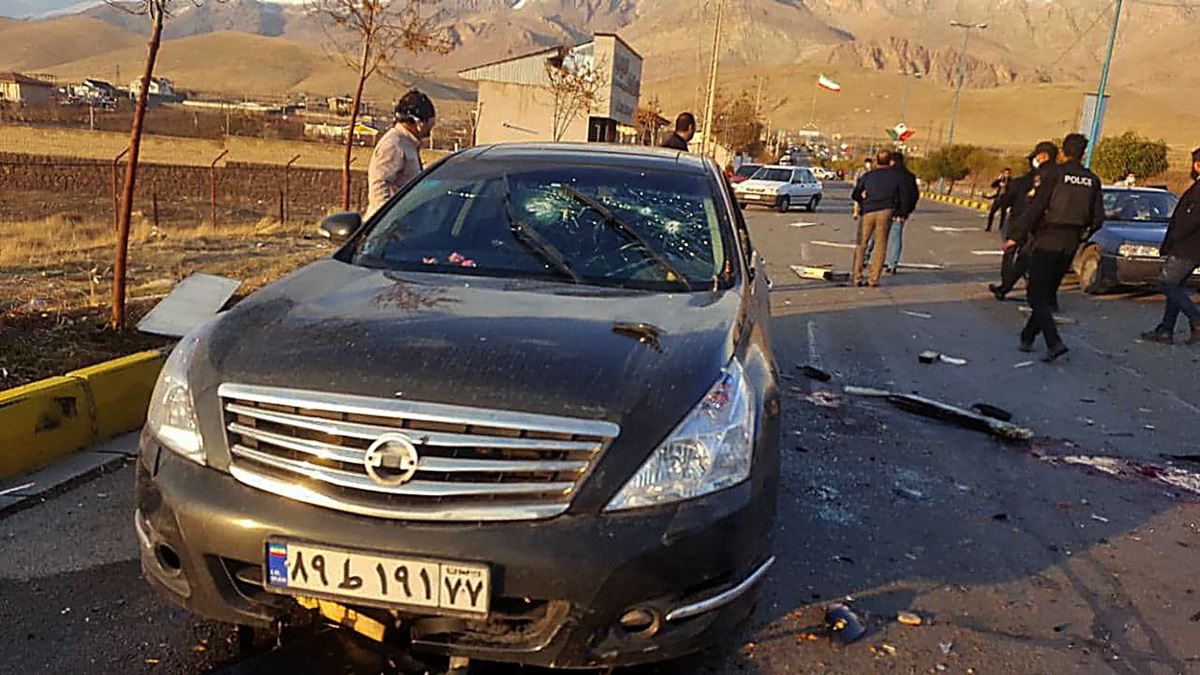 Iran’s top nuclear scientist was assassinated in an ambush near Tehran on November 27, in a brazen attack that threatens to escalate tensions between Iran and the United States and its close ally Israel.

The killing of Mohsen Fakhrizadeh, who Western intelligence services regarded as the shadowy mastermind behind Iran’s past covert nuclear weapons program, may also undermine U.S. President-elect Joe Biden’s goal of reviving diplomacy with Iran when he enters the White House in January.

Iran immediately blamed Israel for the assassination, while suggesting the United States also had an indirect or direct role.

The assassination occurred when a truck with explosives hidden under a load of wood blew up near a car carrying Fakhrizadeh in the town of Absard, near Tehran, Iranian state media reported. As Fakhrizadeh’s sedan stopped, at least five gunmen raked the car with rapid fire and engaged in a gunfight with the scientist’s bodyguards.

Iranian Foreign Minister Mohammad Javad Zarif claimed there were “serious indications of (an) Israeli role” in the assassination.

He also called on the European Union to “end their shameful double standards and condemn this act of state terror.”

Israel declined to immediately comment on the killing of Fakhrizadeh. The Pentagon, White House, State Department, and CIA also declined to comment.

The New York Times, citing one U.S. official and two other intelligence officials, said Israel was behind the attack on the scientist, although it wasn’t clear what, if any, knowledge the United States may have had about the operation.

Israel has long been suspected of carrying out a series of targeted killings of Iranian nuclear scientists and other sabotage operations against Iran using operatives of the Mujahedin-e Khalq (MEK), an exiled opposition group.

Iranian officials said the country would retaliate for the attack on the nuclear scientist.

The military adviser to Supreme Leader Ayatollah Ali Khamenei vowed to “strike as thunder at the killers of this oppressed martyr.”

“In the last days of the political life of their…ally (Trump), the Zionists seek to intensify pressure on Iran and create a full-blown war,” Hossein Dehghan tweeted.

Michael Mulroy, a senior Pentagon official earlier during Trump’s administration, said Fakhrizadeh’s killing would set back Iran’s nuclear program and that alert levels should be raised immediately in countries where Iran could retaliate.

The killing is likely to complicate the Iran file for the incoming Biden administration, which has promised to return to diplomacy with Iran after four hawkish years under Trump.

Trump exited the Iran nuclear accord in 2018 and slapped sanctions on Iran, in a move that has exacerbated tensions and prompting Iran to ramp up its nuclear program.

In January, Trump ordered a U.S. drone strike in Baghdad that killed Major General Qasem Soleimani, Iran’s most powerful military commander. Iran retaliated by firing missiles at an Iraqi base housing U.S. troops, bringing the two countries to the brink of war.

With less than two months left in office, the Trump administration is expected to intensify its “maximum pressure” campaign against Iran in what critics say is a policy designed to undermine the options of the incoming Democratic administration.

Analysts said the killing of Fakhrizadeh, who headed the Defense Ministry’s Research and Innovation Organization, was unlikely to halt Iran’s nuclear program, nor was that the point of the assassination.

“Fakhrizadeh was to Iran’s nuclear program what Soleimani was to its proxy network. He was instrumental to its development and the creation of an infrastructure to support it, ensuring that his death won’t fundamentally alter the course of Iran’s nuclear program,” Ariane Tabatabai, an expert on Iran at the Washington-based German Marshall Fund, wrote on Twitter.

The objective behind the assassination “wasn’t to hinder nuclear program but to undermine diplomacy,” Ellie Geranmayeh of the European Council on International Relations said on Twitter.

She noted that recent high-level visits by U.S. officials to Israel and the Gulf states “raised flags something being cooked up” to “provoke Iran and complicate Biden’s diplomatic push.”

John Brennan, a former director of the CIA when Biden was vice president in the Barack Obama presidency, described the killing as a “criminal act and highly reckless.”

“Iranian leaders would be wise to wait for the return of the responsible American leadership on the global stage to resist the urge to respond against perceived culprits,” he wrote on Twitter.

Fakhrizadeh led Iran’s so-called Amad program that Israel and the West say was a military operation assessing the feasibility of building a nuclear weapon. Tehran long has maintained its nuclear program is peaceful.

With reporting by AFP, AP, dpa, and Reuters.