There’s a lot to criticize about former President Barack Obama, his track record in office, and the liberal establishment, of which he remains a champion. Given America’s current reckoning with race in public life, his new memoir, “A Promised Land,” highlights something separate yet important: the incredible difference in ability between two individuals, Donald Trump and Barack Obama, who were both entrusted by the American people with the same immensely important job.

For all his faults, as any reader of his memoir is immediately reminded, Obama is an uncommon genius. To have risen to such heights in the United States, as a Black man with a Muslim name, no doubt required him to be extraordinary. Trump, meanwhile, a beneficiary of hereditary wealth and status, was richly rewarded with the same prestigious position, notwithstanding his obvious unfitness.

This subtext screams out throughout the pages of “A Promised Land.” The two consecutive presidents could not be more different men. And given how Trump’s political career got started — by spreading a xenophobic conspiracy theory about Obama — it also seems clear that race had something to do with it. Obama does not spend much time directly discussing his experience of race while in office, but, to the extent that he does, he makes a convincing case that the anti-intellectual populist movement now known as Trumpism began in part as a racial backlash to his own presidency — specifically, Trump’s conspiratorial campaign to establish that Obama had been born in a foreign country and was thus ineligible to hold office.

“Birtherism,” as it was called, grimly illustrated that there was something about having a Black man named Barack Hussein Obama as president, no matter how competent and capable, that simply caused a large number of Americans to completely lose their minds. It’s not clear that people who went down that rabbit hole ever came back.

The overpowering insanity of the past five years has drowned out most memories of the “birther” episode that Obama recounts in his book. Looking back, the conspiracy theory and all that went along with it feels like a disturbing early warning sign of the terrifyingly unstable course that U.S. politics had begun to chart. Beginning around early 2011, Trump began publicly questioning Obama’s place of birth, but he also went much further. Trump cast aspersions on Obama’s intelligence, suggesting that his grades, concealed in unreleased college transcripts, must have been poor and that the erudite writing of his previous book, “Dreams From My Father,” meant that a ghostwriter must have penned it.

This was ugly stuff. It was also popular, building Trump’s news media profile and kickstarting his successful political career. The media at the time mostly didn’t endorse Trump’s theories. Yet, in a pattern that would disastrously repeat during his 2016 election campaign, outlets also couldn’t get enough of his wacky sensationalism, providing wall-to-wall national publicity for the future president free of charge.

“Birtherism” grimly illustrated that there was something about having a Black man named Barack Hussein Obama as president hat simply caused a large number of Americans to completely lose their minds.

At the behest of his advisers, Obama writes in his memoir that he tried to downplay potentially divisive racial issues in his rhetoric and focus on unifying messages. As the Trump-orchestrated birther frenzy heated up during Obama’s first term, the president reflected on a hostile reaction to his presidency that was no longer merely about politics. In some quarters of the American public, there was an “emotional, almost visceral” feeling, Obama writes, that “the natural order had been disrupted” by the election of a Black man like him to the presidency. Not all, or even most, conservative opponents of Obama endorsed these sentiments, but the enthusiastic response to the conspiracy theory clearly suggested something deeply troubling was taking place. The emergence of the proudly ignorant Sarah Palin onto the national political scene as John McCain’s possible vice president was an early sign that things were cracking up. Trump, though, proved best at tapping the vengeful and paranoid sentiments that were ready to erupt beneath the surface of American political life, riding them all the way to the White House. 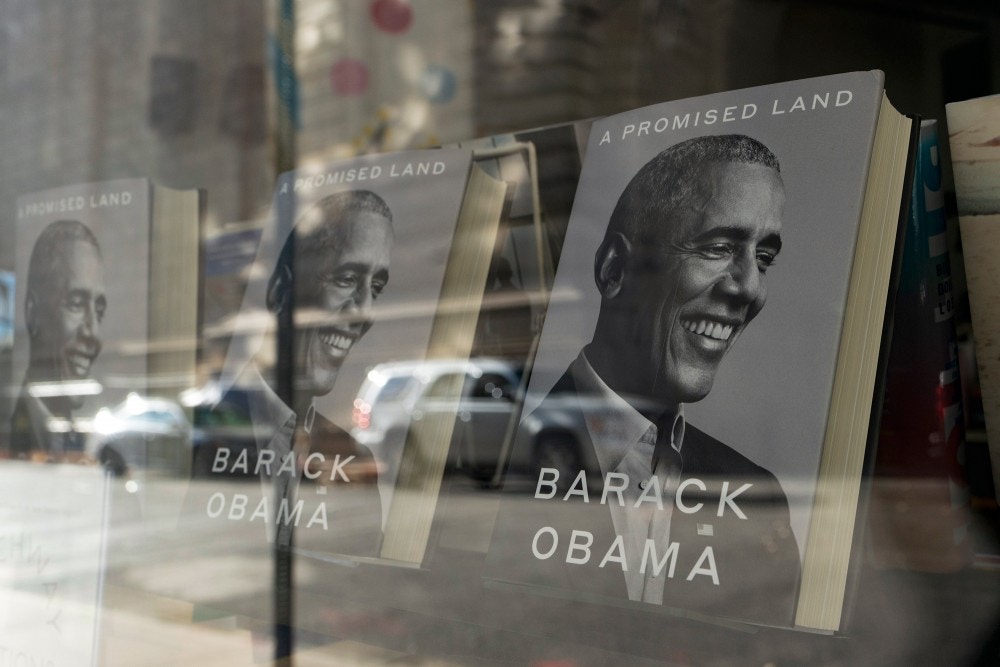 “A Promised Land” by former President Barack Obama is displayed in the window of a New York bookstore, on Nov. 18, 2020.

In the immediate aftermath of Trump’s 2016 election, a grief-stricken American liberal intelligentsia began searching for a way to make sense of their repudiation by much of the public. Rather than reflecting on how their own errors, corruption, and misguidance may have contributed to Trump’s rise, some arrived at American racism as a self-exculpatory “theory of everything” to make sense of things.

In this telling, the liberal establishment was not rejected because of any major failures to uphold a just economic and social order. They lost, instead, because of the ingrained evil of much of the American population. The Obama years had seen some heady liberal fantasizing about a utopian “post-racial” America on the near horizon. With head-spinning abruptness, during the Trump years the new liberal consensus seems to be that America is in fact more racist than ever — indeed, structurally racist in every element.

Personally speaking, I’m not a fan of any of these nebulous and unfalsifiable narratives. While Trumpism may have gotten started with a racist conspiracy, mass movements tend to sweep up people for all types of complicated reasons. Some Obama voters later switched to supporting Trump against Hillary Clinton in 2016, while Trump managed to maintain a solid, and even growing, minority support base after four years in office.

Rejecting the convenient narrative that racism explains everything doesn’t necessitate going in the opposite direction to suggest that it then explains nothing. In his book, Obama never goes as far as Clinton did in writing off a vast section of the U.S. population as beyond reproach. Yet he also doesn’t shy away from stating the obvious: that more than a few people were “triggered” by his presidency into a collective nervous breakdown. “For millions of Americans spooked by a Black man in the White House,” he writes in his book, a loudmouthed reality television host had arrived promising “an elixir for their racial anxiety.”

Birtherism was the ember of an unhinged majoritarian backlash that fanned into an inferno, consuming the Republican Party along with much of the broader conservative movement.

This is a subtext of Obama’s memoir: The story of how, starting with the birtherism episode, the embers of an unhinged majoritarian backlash to his presidency fanned into an inferno that consumed the Republican Party along with much of the broader conservative movement. A common undercurrent to conservative arguments about immigrants and minorities is that when they ask for accommodations or special recognition from society, they are inevitably eroding its intellectual and cultural standards. After watching many conservatives spend years defending intellectual train wrecks like Palin and Trump, it’s difficult to take such claims seriously. With so many people having been driven out of their minds by a Black president, there is little reason to think that Trump’s narrow defeat in the 2020 election is going to improve that condition.

Obama’s faults as a president are there for us to criticize. He failed to rein in a rampaging national security state. There were ugly compromises with Wall Street and, more generally, a perceived coziness with a corrupt ruling establishment. In a way that he does not really confront in the book, those failures helped lay the groundwork for a populist backlash now coming from both the right and the left.

There was one thing Obama, to his credit, did understand very well: how a mix of celebrity, xenophobia, and paranoia might prove a winning formula for a hostile takeover of American democracy, perhaps even putting an end to the liberal order of which he himself is a product.

“What I knew was that he was a spectacle, and in the United States of America in 2011, that was a form of power. Trump trafficked in a currency that, however shallow, seemed to gain more purchase with each passing day,” Obama writes. “Far from being ostracized for the conspiracies he’d peddled, he in fact had never been bigger.”