This story was originally published by Yale E360 and is reproduced here as part of the Climate Desk collaboration.

For four years the country has been governed by the GOP and only one guy has gotten to talk — disagree with him and you became a non-person.

That’s not Joe Biden’s style, and it’s not in the Democratic Party’s cellular structure. Indeed, we’re only a few days in to the new world, and there’s already considerable talking underway. Shouting even. Figuring out how to handle it — how to make it constructive instead of destructive — is going to be a big part of making the next four years as productive as they can be. And since we desperately need them to be effective on climate — and on racial justice, on health care, on immigration — we better learn how to talk.

One meta-argument is underway: “left” versus “center,” personified as Alexandria Ocasio-Cortez versus some Congresspeople you’ve vaguely heard of from purplish districts who don’t like anyone talking about socialism. But while that splashy fight is drawing the attention of pundits, there’s another subtler communications question that has to get worked out: How do different parts of the Democratic coalition get across the things that really matter to them, like climate change, in a way that makes the point crystal clear, but doesn’t cut off the chance of future dialogue?

This is inherently hard, because activists are deeply invested in the issues they work on — often they’re volunteers, always they’re passionate. As Keeanga-Yamahtta Taylor pointed out in a wise essay this week, the pent-up demand for change is almost beyond imagining. Therefore, the urge, when frustrated, to stalk away from your partner in a holy rage will always be there. But those of us who care deeply about climate are married to the Biden administration for at least the next four years — they know it, we know it. It’s not going to be a storybook relationship, but it can be more, rather than less, successful.

One useful lesson from marriage is that when there are things you really care about, you have to have a way of getting that across. Here’s the climate example of the week: The Biden transition team signaled in Politico last weekend that they were thinking of returning Ernest Moniz to his Obama-era position atop the Department of Energy. For most Americans watching from the sidelines, this won’t even rise to the level where they’d notice; Moniz seems notable only for a haircut that makes him look like an extra from “Hamilton.” But for those of us engaged every day in this work, it’s an ominous sign: Moniz represents an old approach to our energy dilemmas, one that’s rooted in the use of natural gas and resistant to the all-in approach on renewables that activists (and scientists) recommend.

That’s why Evan Weber, political director of the Sunrise Movement — the youth-led movement that brought us the Green New Deal — immediately tweeted out: “No one with fossil fuel ties belongs in Biden’s cabinet … Moniz’s archaic energy views would build us a bridge to climate catastrophe.” That’s a blunt but not overbearing warning — it’s different from saying, “So-and-so must be Energy Secretary.” There are, realistically, a couple hundred people who could do the job, and so this preserves plenty of maneuvering room for the transition team.

It also hints at the main reasons why this kind of move would be a troubling one for Biden to make. First, it’s a bad idea on policy grounds. Moniz is indeed archaic — technology has changed incredibly fast since the start of his term at DOE in the second Obama administration. Solar and wind power have seen costs fall on the order of 90 percent, which means we don’t actually need the natural gas “bridge” he sold the Obama administration on; the carbon capture projects he subsidized at DOE were vastly uneconomic. Second, it’s a bad idea optically — he’s taken lots of money to serve on the boards of various fossil fuel concerns, most notably the Southern Company. His friends will surely argue that all that cash has not affected his views, and perhaps they’re right — but it’s surely altered how the rest of us perceive him. At various points in the next four years, the Biden administration is going to have to give us bad news on the climate and energy front — the lack of a Senate majority almost guarantees that. It’s going to need a messenger who people have reason to trust, and Moniz isn’t it.

Those signals should be enough for a savvy transition team that is, one hopes, trying to keep Biden out of unnecessary battles, since there will clearly be more than enough trouble he can’t avoid. But the signal also comes from people who earned the right to be heard: The Sunrise Movement, in the wake of a tough primary loss for their guy Bernie Sanders, didn’t walk away. They partnered effectively with the Biden campaign, helping reach a shared policy platform and then delivering millions of phone-banking calls. They are, in other words, a power — probably the most important electoral force in the environmental movement at this point.

Moniz’s backers, by contrast, come largely from a bloc of pretty centrist environmental think tanks with no mass following at all, and from the building trades unions who applaud his support for constructing lots of really big and expensive stuff, especially if it has to do with natural gas. Given that the North America’s Building Trades Unions didn’t endorse Biden until October 23 and that they’d been backing Trump from the first day of his new administration — well, it’s politically pretty clear that you have to dance with the one that brung you. Which is not to say you hang the building trades out to dry: Biden’s call for unity is real and important, and any plan for the future needs to be very focused on making sure that people currently building oil pipelines have something else to build instead.

In fact, the ability to figure out a “just transition” is crucial to making progress at the speed we need to go — and it’s entirely possible that a guy from Scranton, with deep ties to Rust Belt unionism, is better positioned to do precisely this than most people in the environmental movement. It’s a place where he should be given some room to operate, especially since he’s been willing to say the essential thing out loud: that we must transition away from the oil industry. Those words in the last debate were powerful, and they did not doom him — not in Pennsylvania or Colorado or in other places with lots of fossil fuel jobs. He’s earned some credibility.

The environmental movement will win any fight over Moniz, I imagine, but it won’t win every fight. Biden doesn’t have much margin — even if the Democrats somehow win both Georgia Senate seats and hence take control of a tied Senate, West Virginia’s Joe Manchin has said he won’t vote to end the filibuster — nor, likely, for anything that looks like a sweeping Green New Deal. And that’s a bitter shame, because it’s all desperately needed. But you live with the political reality you have while you try to build the political reality you need, and simply denouncing the Dems won’t get you any closer to the latter, emotionally satisfying as it may be. Waging important fights while not damaging the Biden presidency, and Democratic prospects in the midterms, and the next presidential election will be incredibly hard — but since climate legislation (and support for all other progressive legislation) depends on just that, we better figure out how.

I have a few memories of the last time we were in this position, when Barack Obama was elected in 2008. It was a very different scene, of course: Occupy Wall Street hadn’t happened, Black Lives Matter had yet to be born, Bernie Sanders hadn’t yet run, and AOC had just turned old enough to vote, so there was less of a progressive movement, and much less of a climate movement. The Obama administration was in the midst of the headlong expansion of the oil and gas industry that would eventually make America the biggest hydrocarbon producer on the planet. Climate activists knew what was happening was wrong, but we debated long and hard about whether to take on the Keystone XL Pipeline because we also knew that it meant challenging a president popular with Democrats, the first African American president.

So when we went to work we didn’t attack him — instead we explained that we were giving Obama the room to do what he’d said he wanted to do. When 1,254 went to jail after anti-fossil-fuel demonstrations in D.C. at the start of that campaign in 2011, most were wearing Obama buttons, because that’s what we’d asked them to do. A few months later, when we surrounded the White House — people five-deep around a mile-and-a-half perimeter — we said he might want to think of it not as a house arrest, but as a group hug. I’m not naïve — I know Obama didn’t really want protesters forcing his hand on what he thought was a secondary issue. (He was wrong about that, by the way — Keystone XL turned out to be a critical battle, demonstrating that it was possible to stand up to Big Oil, and hence helping spur crusades against every big new infrastructure project). But certainly it was better — and more tactically effective — to take him on in the spirit of unity, not the spirit of division. 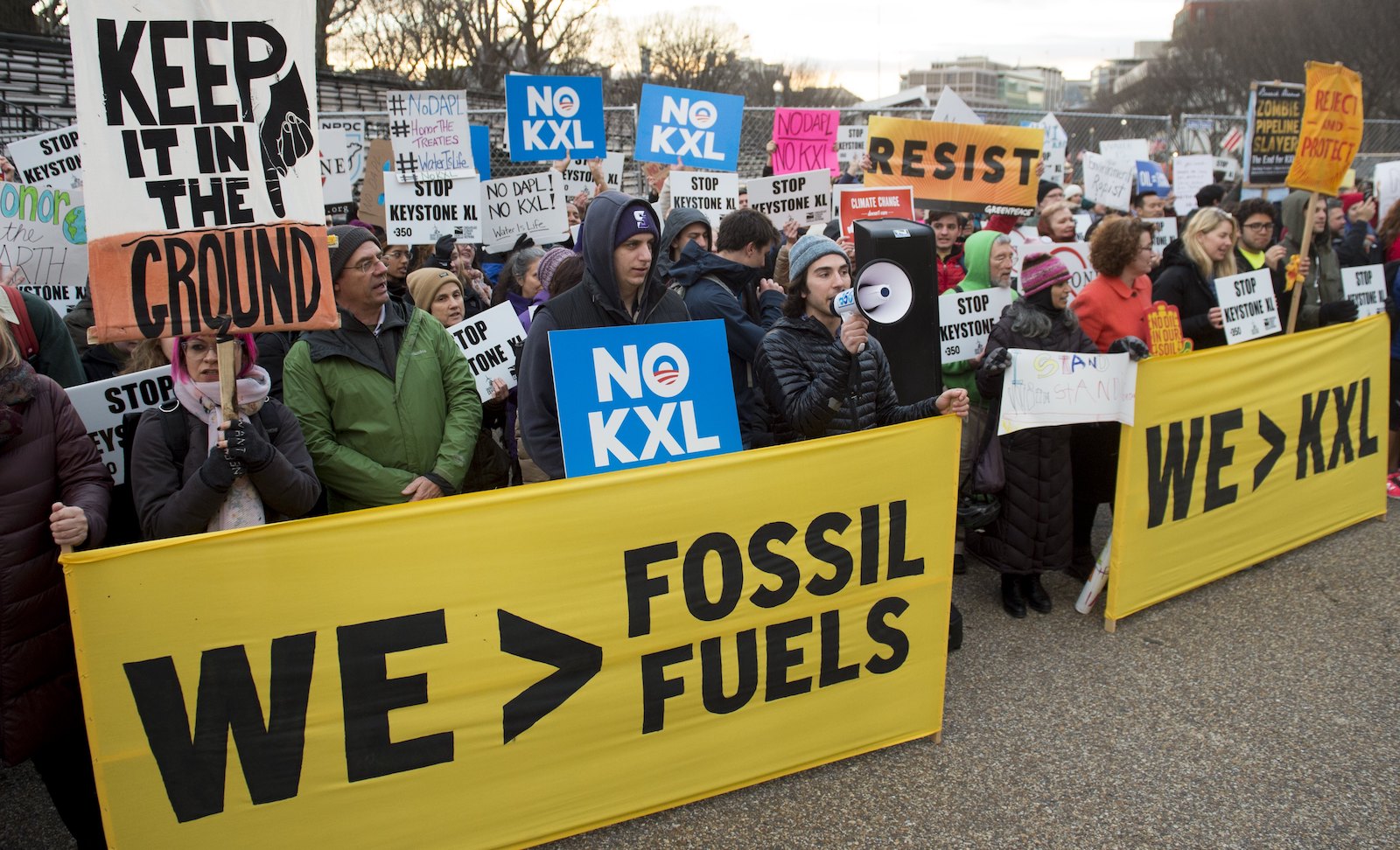 Opponents of the Keystone XL and Dakota Access pipelines hold a rally in 2017 as they protest President Donald Trump’s executive orders advancing their construction. Saul Loeb / AFP via Getty Images

Another way to keep the mood from turning impossibly bitter is to remember that Washington isn’t all that counts. In the climate fight, for instance, it’s clear that action from Wall Street is crucial too — the divestment push, now at $15 trillion in endowments and portfolios, has made a huge difference, as has the Stop the Money Pipeline coalition, which has started convincing financial institutions to ditch fossil fuels.

And here the Biden administration can provide massive help: Mitch McConnell can’t stop the Treasury Department, the SEC, and the Fed from forcing banks to take climate risk seriously. People in the right positions who understand that risk, like Elizabeth Warren and former Federal Reserve Board member Sarah Bloom Raskin, will make that fight much easier by, say, requiring companies to disclose their climate risk, and by turning institutions like the Export-Import Bank away from fossil fuels. When Mark Carney, Governor of the Bank of England, started down this path five years ago, it sent tremors through the fossil fuel financial complex, and those would be seismic if they came from Wall Street, not just the City of London. It’s possible, in fact, that these could turn out to be the most important climate actions a Biden administration will ever take.

This will always, inevitably, be a hard marriage. Denied action for so long, and in need of such deep change, the broad progressive movement will rightly demand a lot. Biden will have to deliver all he can. And we will need to figure out a way to keep it from turning into an ugly split that benefits no one.

Editor’s note: Bill McKibben is a member of Grist’s Board of Directors.