There is a very public battle under way in Uzbekistan between several media outlets and the agency tasked with overseeing the press in the country.

The outlets say they have the right — and a duty — to report on current and pervasive energy shortages and the true scale of the spread and human cost of the coronavirus pandemic in Uzbekistan.

But the Agency for Information and Mass Communications (AIMC) objects to the sources and “negativity” of some reports and what it calls “one-sided” information.

AIMC Director Asadjon Khodjaev has warned the offending outlets and said there could be “serious legal consequences” if they do not rein in their reporting.

Ever since Shavkat Mirziyoev became president in late 2016, Uzbek authorities have promised to ease restrictions put in place by his predecessor, longtime authoritarian leader Islam Karimov, that earned the government a reputation as a chronic abuser of rights.

There have been some positive changes, though the media has been kept on a short leash the past four years. 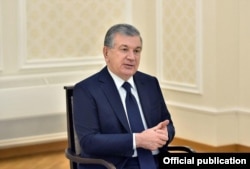 The AIMC and Uzbekistan’s Supreme Court have warned media outlets about “objectivity” in their reporting, and the AIMC has made it clear that the authorities will hold not only media outlets — but also bloggers and people posting material on social networks — responsible for their comments and content.

Uzbek media outlets reported on an Energy Ministry announcement at the start of November that there would be limits on the use of gas and electricity in homes and businesses.

Some small- and medium-sized businesses in Tashkent said they were cut-off entirely from gas supplies while others faced rationing.

Many people around Uzbekistan looked for substitutes for heating and cooking – including using gas canisters, coal, wood, and pressed manure (kizyak).

Gazeta.uz, one of the media outlets that recently got a warning from the AIMC, reported on November 10 that Deputy Energy Minister Behzot Normatov gave assurances there was no need to resort to burning wood, coal, or “kizyak” since there were ample supplies of gas canisters that could be used to cook.

But one week later, RFE/RL’s Uzbek Service, known locally as Ozodlik, reported that people were waiting in line to buy coal in some parts of Uzbekistan and unscrupulous merchants were jacking up the prices.

Uzbeks line up for coal in the Andijon region. (file photo)

Media outlets such as Daryo started reporting on the deaths of thousands of chickens at poultry farms after their electricity had been turned off.

Many other businesses were left without gas or electricity and now face financial ruin while an ever-increasing number of people are huddled together in their dark, cold homes.

Kun.uz was one of the outlets reporting on the energy shortages, including a November 22 story, Give The People Electricity And Gas! An old and painful topic on social media, it reported what problems people were posting about due to the electricity and gas shortages.

The next day, Kun.uz received a letter from AIMC Director Khodjaev that claimed the “[Kun.uz] material highlights the problems in the supply of electricity and natural gas to the population in a one-sided way.”

The letter warned Kun.uz that if it “does not take the necessary measures to prevent the recurrence of such a situation in the future, it will have serious legal consequences.”

The management at Kun.uz was sufficiently incensed at the letter that they wrote and published a response, including an English version, to AIMC and Khodjaev.

The other story of major significance for Uzbekistan in November was the continued debilitating effects of the coronavirus and some doubts that officials are providing accurate information about the number of people infected and those who have died from COVID-19.

A lack of transparency on the part of the state regarding those numbers has long been suspected.

As of December 1, the number of registered coronavirus cases in Uzbekistan was 73,145 with about 610 deaths in a country of more than 34 million. 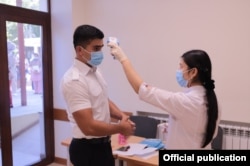 Many have cast doubt on Uzbekistan’s official coronavirus infection rates, which are considerably lower than those recorded in some neighboring countries. (file photo)

Gazeta.uz, for one, reported on the discrepancies in the figures between state agencies and in one of the reports.

It noted in a November 17 statement from the prime minister’s press service that 17,500 beds had been made available for COVID-19 patients around the country and currently some 6,570 infected people were being treated.

Gazeta.uz noted in its report that on the same day, the Health Ministry had reported that 2,123 patients were being treated for COVID-19. The news site had inquired with the Health Ministry about the lower figure but had not yet received a response.

Khodjaev sent a letter on November 20 warning Gazeta.uz of “serious legal consequences” for, according to Gazeta.uz, publishing news that “compared statistics of patients at COVID-19 hospitals with data from the Health Ministry.

Gazeta.uz’s management wrote on November 25 that it considered “the warning letter an overreaction [and] an attempt to force the publication to stop asking the government ‘unpleasant’ questions.”

On November 27, Gazeta.uz said the AIMC had warned Gazeta.uz, Daryo.uz, Kun.uz, Podrobno.uz, and Repost.uz about publishing “commentary and insults” and for “expressing doubts about coronavirus statistics and a failure to provide an official clarification.”

Concerning Khodjaev’s complaint about reports on electricity and gas shortages, Kun.uz wrote that Khodjaev’s letter claimed “the government of Uzbekistan was accused of committing crimes against the population in the material.”

But Kun.uz countered: “the material was about how people reacted to problems in the power supply system [and] was not focusing on criticizing the government.”

Kun.uz continued that “it is a fact that electricity is cut off for hours all over the country. This can be seen from the complaints on social networks and the thousands of appeals addressed to our editorial office.”

In its November 25 post, Gazeta.uz responded to the AIMC complaints by saying: “There are many cases when state bodies provide the public with incomplete information on issues of interest to citizens or do not issue it at all.” It continued: “Often the AIMC in such situations remains on the sidelines and the public, not receiving important information, loses.”

Western diplomats in Uzbekistan have certainly taken note of the dispute between the media outlets and the AIMC.

On November 26, British Ambassador to Uzbekistan Tim Torlot posted on Twitter: “I am surprised and sad to see how AIMC’s approach [in] support of [the] development of [the] mass media seems to have changed recently. A democratic society cannot be built without a robust, free media.”

On November 28, U.S. Ambassador to Uzbekistan Daniel Rosenblum tweeted that he was “Disappointed by recent actions taken by the Agency for Information and Mass Communications to pressure [independent] media outlets. To succeed, Uzbekistan’s ambitious reforms require a free & open press. AIMC pressure [is] not consistent with this.”

As mentioned, the AIMC and Uzbekistan’s Supreme Court have previously warned media outlets about their reporting and the prime minister and mayor of Tashkent have also had some very harsh words and even threats for journalists.

But there are mixed signals coming from Uzbek officials.

On November 30, 2019, the chairwoman of the Uzbek Senate, Tanzila Narbaeva, addressed parliament, saying, “The head of our state rightly stressed that the media play a special role in the implementation of reforms” and that “we [officials] need to accept media criticism the right way.”

On February 3, Saida Mirziyoeva, the president’s daughter, presented a new social fund for the development of the country’s mass media by saying, “We believe in freedom of speech and its power.”

The media outlets mentioned have all reported on certain successes the government has claimed in the fight against the spread of the coronavirus. They have also covered efforts to improve the gas-distribution system, the discovery of new gas fields, increases in production, and other positive stories associated with efforts to improve Uzbekistan’s horribly inadequate power grid.

But it is difficult to put a positive spin on severe power shortages in winter and people becoming ill from a virus that worldwide has affected nearly 64 million people and killed about 1.5 million.

Uzbek officials, including President Mirziyoev, have emphasized that the media is essential for reporting the problems and opinions of Uzbeks so that the authorities are aware of the problems.

Yet when reporting bad news, several media outlets have been threatened with “legal consequences” if they continue to do so.

Kun.uz wrote, “It would not be wrong to say that this behavior [toward the media] smells like ‘Old Uzbekistan.'”