Argentinian footballer Diego Maradona passed away on November 25 at the age of 60 from a heart attack. Shortly before his death, he was undergoing an operation to remove a blood clot from his brain. The football star was laid to rest in his hometown, the Argentinian capital of Buenos Aires on November 26.

Following this, several users posted a video on social media showing a huge crowd of people gathered at a stadium. Twitter user @Exsecular, who is followed by Prime Minister Narendra Modi, shared the video claiming it shows the crowd at Maradona’s funeral. (Archive link)

A few other Twitter users (1, 2) also shared the clip with the same claim.

This claim also made its way to Facebook. Vega Entertainment, a verified Facebook page, shared the video claiming Maradona’s fans gathered at the stadium for his last rites. (Archive link)

#DiegoMaradona’s funeral procession today.
Mesmerizing.
What does it indicate ?
A man par excellence.
He is neither a president nor a prime minister of any country.
His performance in football ground spoke for him.
So much of Love, adulation & respect who gets these days ?
He will remain immortal in the hearts of football fans.
Maradona..U have gone now in the safe hands of God, but whole football fraternity will remember U as ” God of Football” like our own living legend Sachin Tendulkar as ” God of cricket”
Maradona..Bravo
May your soul rest in eternal peace in the lap of Almighty.

Alt News performed a reverse image search of a few frames of the clip and found a fact check report by news agency AFP dated June 13, 2020. This itself proves the video could not possibly depict Maradona’s funeral. The report states that the video was earlier viral as a “demonstration against Argentina’s president, Alberto Fernandez”.

Local newspaper La Nacion reported on October 20, 2019, that a crowd had gathered near the Obelisk memorial in Buenos Aires ahead of the upcoming elections in support of then-president Mauricio Macri. Therefore, this clip shows a group of people attending an election rally. AFP also included Macri’s tweet containing a picture of the aerial view of the rally.

Comparing the frame appearing at the 13-second mark in the viral clip with the photo in this tweet confirms that both were taken at the same rally. 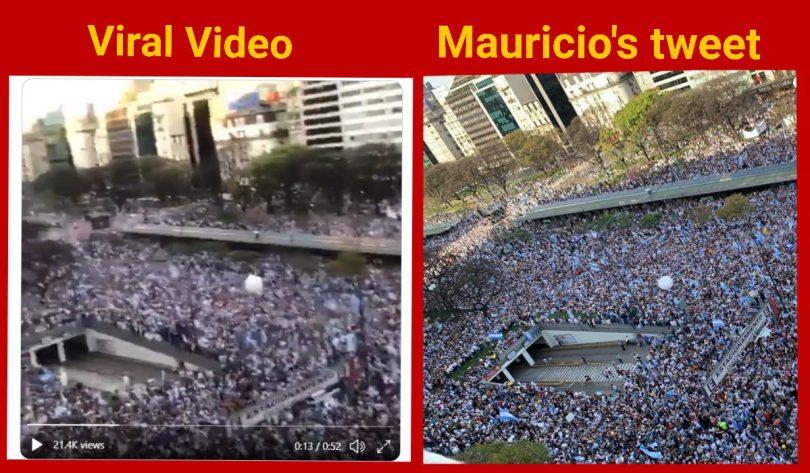 Macri had also broadcast a Facebook Live from the event which can be found on his official Facebook page. This picture was also shared on his Instagram profile.

Therefore, the video is actually a year old and it shows a massive crowd gathered at the election rally of Argentina’s former president Mauricio Macri. It does not depict Maradona’s funeral processions.