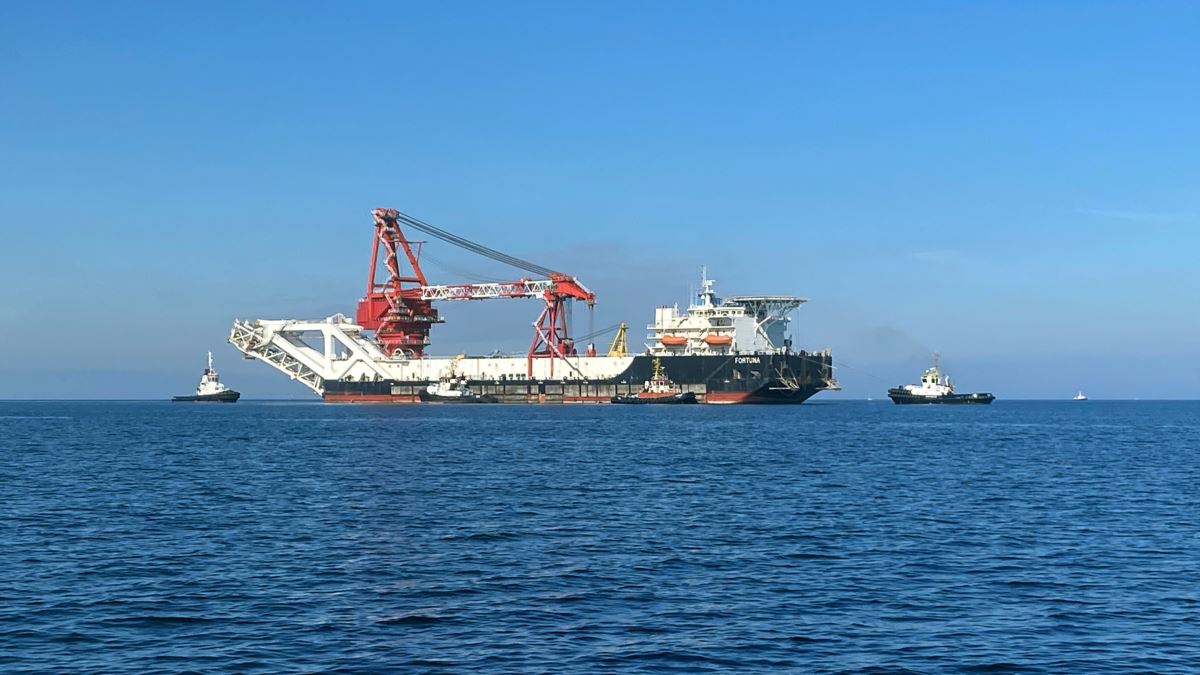 A Russian pipe-laying ship has moved into position to resume construction of a natural gas pipeline in the Baltic Sea that the United States, Ukraine, and other countries have vehemently opposed.

German shipping authorities have issued an advisory for the Baltic Sea area where the last few kilometers of the controversial Nord Stream 2 pipeline are set to be laid and warned vessels to avoid the zone from December 5-31.

The Akademik Cherskiy reached the area off the coast of Poland on December 5, according to Marine Traffic tracking services.

Also on December 5, the Russian pipe-laying ship, Fortuna, left a German port apparently heading to a different location where another pipeline section is to be built. Norddeutscher Rundfunk (NDR) posted a video showing the 170-meter-long vessel begin pulled by five tugboats.

A spokesman for the Nord Stream 2 project declined to disclose information about the ships’ plans because he wanted to protect the companies involved, according to NDR.

The repositioning of the vessels followed Russia’s pledge to complete the pipeline despite the threat of U.S. sanctions. The pipeline still has 16 kilometers left in German waters and another 60 kilometers in the Danish section yet to be built.

Russia’s state-controlled natural gas company Gazprom has moved to finish construction of the multibillion pipeline with its own resources after construction was thrown into uncertainty a year ago following U.S. sanctions on the project, which will double Russian natural gas deliveries to Germany.

The United States argues that the Nord Stream 2 would erode European energy security at a time when relations between the West and Russia are at post-Cold War lows over numerous issues, including the poisoning of Kremlin critic Aleksei Navalny and Moscow’s 2014 annexation of Ukraine’s Crimea.

German Chancellor Angela Merkel has faced criticism for backing the project, but there has been speculation that she might withdraw her support following the poisoning of Navalny earlier this year.

The U.S. Embassy in Berlin on December 5 called on the German government to halt construction of the pipeline.

“Now is the time for Germany and the EU to call for a moratorium for the pipeline’s construction,” Robin Quinville, charge d’affaires at the embassy, told the newspaper Handelsblatt on December 5.

This would send a clear signal that Europe “no longer accepts Russia’s sustained malevolent behavior,” she said.

The official added that the pipeline was not just an economic project but a political tool for the Kremlin to circumvent Ukraine and split up Europe.

Poland, Ukraine, and the Baltic states are fiercely opposed to the pipeline. Ukraine has complained because Nord Stream 2 would reroute Russian gas around Ukraine, depriving Kyiv of much needed transit fees.

Russia, which initially expected to complete the pipeline in early 2020, has accused the United States of using energy sanctions as a “weapon” to open new markets for its oil and gas industry.

After the sanctions on vessels were passed, Russian President Vladimir Putin said he hoped the pipeline would be completed by early 2021.

The U.S. Congress is considering another bill that would widen the scope of sanctions to include any individual or entity providing insurance, technical certification, or welding services for the project.

With reporting by dpa, AP, AFP, and Norddeutscher Rundfunk