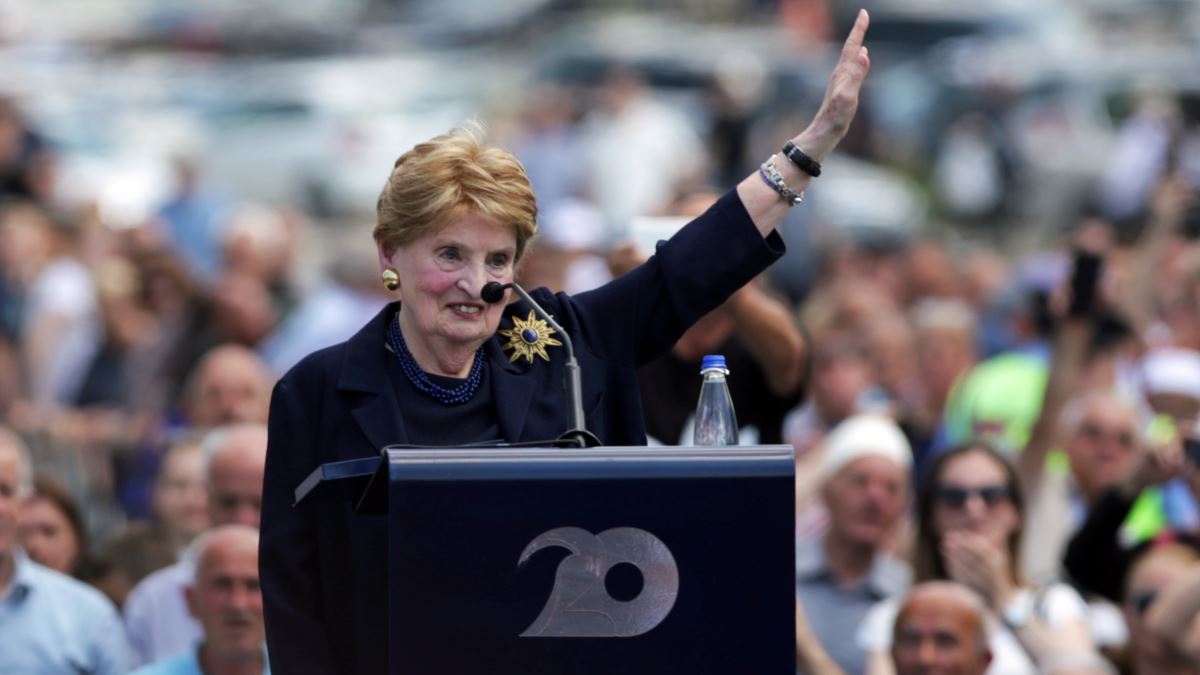 WASHINGTON — Former U.S. Secretary of State Madeleine Albright told a congressional committee on December 8 that corruption is “crippling” the Western Balkans and urged Washington to devote more attention to the strategically important region to counter Russian and Chinese influence.

Albright, who served under President Bill Clinton from 1997 to 2001, also said the United States needs to work closer with Europe on resolving the region’s lingering political and economic problems.

“We must attack the rampant corruption that is crippling political institutions and undermining the rule of law across the region,” Albright told the House Foreign Affairs Committee during a hearing dedicated to Balkan policy recommendations for the incoming Biden administration.

“In every country, leaders seem to regard political office as a source of patronage to stay in power. Addressing the so-called state capture and rooting out these influences must be a top priority,” she said.

The United States has been seeking to integrate the Balkans into Western organizations such as the European Union and NATO in order to bring peace and prosperity to a region that has suffered from ethnic wars. Serbia’s reluctance to recognize its former province of Kosovo as an independent country and Republika Srpska’s threats to secede from Bosnia-Herzegovina are the two key issues hindering that goal.

Albright said the United States has pulled back from the region following its deep involvement in stopping the ethnic wars of the 1990s. The United States led two NATO military campaigns in the Balkans that decade, including the 1999 bombing of military targets in present-day Serbia to halt the cleansing of ethnic Albanians in Kosovo.

Albright was one of three experts to speak at the hearing, which also addressed the growing influence of Russia and China in the region, the autocratic tendencies of Serbian President Aleksandar Vucic, and the need for U.S. leadership to solve outstanding problems.

“This may sound too simplistic, [but] we have to pay attention,” Albright said when asked about how to counter Russian and Chinese influence. “We have not paid the kind of attention that is necessary to this area, feeling kind of ‘oh well, we did everything that we could.’”

Daniel Serwer, a professor at Johns Hopkins University and a former State Department special envoy to Bosnia, also called for more U.S. involvement in the region in cooperation with Europe to solve the most critical issues.

Serwer said that Europe has been unable to solve Balkan regional problems by itself in part because some EU states refuse to recognize Kosovo. Europe has been leading the effort to solve the political impasse between Serbia and Kosovo for a decade.

“The essential precondition for solving the remaining Balkan problems is American recommitment to the region in tandem with European allies,” Serwer said. The EU “demonstrated it cannot do the job on its own,” he said.

The experts said Biden should push Vucic to recognize Kosovo, end military cooperation with Russia, and improve the state of democracy inside the country if Serbia wants to join Western institutions. Vucic, who vowed to lead Serbia toward European Union membership, has been accused of curbing media freedoms and intimidating critics.

“The Biden administration will need to toughen up on Belgrade together with Europe,” Serwer said.

The experts warned Congress against pulling NATO forces from Kosovo, saying it would be a sign of a lack of commitment to the region at a time when rival powers are getting more involved.

NATO has a force of 3,500 in Kosovo, including slightly less than 700 U.S. military personnel.

“If it were ended at the moment, it would be something that would continue to make the people in the region think well, the rest of the world doesn’t care,” Albright said of the troop deployment.

Janusz Bugajski, a Balkan expert and senior fellow at the Jamestown Foundation, a Washington-based think-tank, told the committee that the United States needs to “pay more attention” to building up a security force in Kosovo.

“In that way, Kosovo will be in NATO rather than NATO being in Kosovo,” he said.

Lawmakers in Kosovo in December 2018 passed legislation to build a full-fledged army, a move that has inflamed tensions with Serbia but that would take years to accomplish.

Turning to Bosnia, the experts warned that the 1995 Dayton agreement, which created a political settlement based on ethnic power sharing following years of war, is no longer viable and only serves to perpetuate corruption.

“The United States and the European Union must focus their efforts in Bosnia on the abuse of government and state-owned enterprises, taking away the levers of power that keep the current system in place,” Albright said.

Serwer said the United States should pressure the EU to sanction those pushing for the breakup of Bosnia and to move EU peacekeeping forces to the country’s northeast to block secession by Respublika Srpska, the country’s ethnic Serb region.