Tajikistan is preparing to bring home hundreds of its citizens from refugee camps in Kurdish-controlled parts of Syria — mostly Tajik wives and children of slain or imprisoned Islamic State (IS) fighters.

Diplomats tell RFE/RL they expect the first group from among about 800 Tajiks stranded in the camps to be repatriated “within weeks.”

Tajikistan’s ambassador to Kuwait, Zubaidullo Zubaidzoda, visited the Al-Hawl and Al-Roj camps in northeastern Syria on December 8 and 9, meeting with hundreds of Tajik women and their children.

“We registered the names of some 200 Tajik nationals willing to return home in the voluntary repatriation program,” Zubaidzoda told RFE/RL from Syria on December 9.

But Zubaidzoda said some of the Tajik women in the camps declined to meet with his entourage, saying they didn’t want to return to Tajikistan.

During the past several days, Zubaidzoda has met with the Kurdish authorities who control the camps and has secured their permission for the repatriations.

He said he hoped the first group will arrive in Dushanbe before New Year’s Day or in early January. 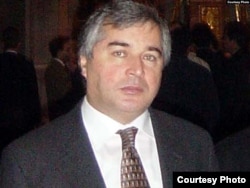 The Tajik government has said it’s determined to bring back home all Tajik women and children who are being held at prisons and refugee camps in Syria and Iraq.

Tajik authorities fear family members of IS fighters could pose security threats in the long term if they are left languishing abroad.

Some 2,000 people from Tajikistan have left the predominantly Muslim Central Asian country since 2014 to join IS militants in Syria and Iraq.

As part of a larger program since 2019, Tajikistan has repatriated dozens of children from Iraq, where their Tajik mothers were jailed for being members of the extremist group. But that effort was suspended in 2020 when the coronavirus pandemic led to border closures and halted international travel.

One 27-year-old Tajik mother at the Al-Hawl camp confirmed Zubaidzoda’s remark that there were some women who would rather stay in Syria.

“Not only don’t they want to go back to Tajikistan, they are also putting pressure on other Tajik women — telling us not to meet with the diplomats and not to register our names for repatriation,” said the woman who introduced herself as Madina.

“They say we’ll be arrested upon our return to Tajikistan,” Madina told RFE/RL from the camp on December 9 via WhatsApp.

According to Madina, Tajik women in Al-Hawl “are divided into two groups” — those who’re eager to return and others who don’t trust the Tajik authorities.

It remains unclear if Tajik authorities would try to convince the latter group to return to Tajikistan along with their children rather than raising them in foreign refugee camps.

The situation raises security concerns because many sections of the Al-Hawl camp are said to be dominated by radicalized widows of IS fighters who haven’t lost hope the extremist group might still return. Reports say die-hard IS supporters have dubbed the camps “the cradle of the next caliphate.”

Madina said she was unmoved by the threats from die-hard IS widows. She told RFE/RL she wanted to return home with her two small children and start a new life where they can forget the horrors of IS and Syria she has experienced since she arrived there in 2015.

After Iraqi forces recaptured Mosul from the IS in 2017, she said her family moved to Deir ez-Zor in eastern Syria. She said her husband was arrested later by Kurdish forces in Deir ez-Zor — leaving her behind with the children before they ended up in the Al-Hawl camp.

Madina’s story is similar to many other Tajik women in the camp, who say they were brought to Syria and Iraq by their husbands.

One Tajik national in Al-Hawl told RFE/RL that some women remarried up to six different IS fighters after their husbands were killed.

Speaking on condition of anonymity due to safety concerns, the Tajik said on December 9 that some women at Al-Hawl had up to five children from different IS-fighter husbands from different countries.

Regardless of the nationality of the children’s fathers, Dushanbe has said it accepts children born in Iraq or Syria as Tajik citizens if their mothers are Tajik. 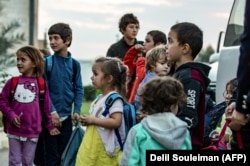 Russian children from the Al-Hawl camp are handed over to a delegation from their country in the northeastern Syrian city of Qamishli last month.

Dushanbe estimates that up to 800 Tajiks, most of them children, are receiving help in the Syrian camps. The exact number is difficult to obtain because of chaos, a lack of documents, and the reluctance of some camp residents to disclose their true identities and nationalities.

A majority of them live in the Al-Hawl camp, a vast compound that houses more than 60,000 people — including families of foreign IS fighters as well as Syrians and Iraqis who’ve been displaced by the war.

Tajik diplomats and women living in Al-Hawl describe “appalling conditions” in the crowded camp — a shortage of food, medicine, and electricity. “It’s very cold,” Zubaidzoda said. “The water gets inside their tents through holes.”

Conditions are said to be better in the smaller Al-Roj camp, where Tajik diplomats have registered 20 women and seven children for repatriation. “We’ve got electricity 24 hours a day and use electric heaters inside the tents,” said an Al-Roj camp resident, who introduced herself as a 31-year-old mother from northern Tajikistan.

“The Tajik officials spoke with us,” she told RFE/RL on December 8. “They promised to take us back home soon.”

Living in the Al-Roj camp with her two small children, the woman said she had surrendered herself to Kurdish forces in Deir ez-Zor after her husband was killed in combat and the family went hungry for several days.

The majority of the Tajik families arrived in the refugee camps after the extremist group’s last stronghold, Baghuz, fell to Kurdish-led forces in March 2019.

‘Cradle Of Next Caliphate?’

Tajikistan, Kazakhstan, and Uzbekistan have all opted for a policy of repatriating their nationals from Syria and Iraq in order to rehabilitate them in their homeland.

In contrast, many European countries, have turned their backs on their nationals there – the families of IS fighters – arguing that they would pose security threats if they were allowed to return to Europe.

Conditions in the Al-Hawl camp are described as “appalling.”

Some terrorism experts warn that policy could backfire. “Just leaving them in limbo in these camps is not going to make them any less radical or angry at the states they are from,” says Raffaello Pantucci, a senior research fellow at the Royal United Services Institute in Britain.

“The urgency is accentuated by the fact that there are numbers of young children involved, who are not getting any younger and are spending their formative years in a hideous situation which is potentially going to scar them in later life,” Pantucci told RFE/RL.

Dozens of children repatriated to Tajikistan from Iraq continue to undergo a carefully designed rehabilitation process at several closed facilities near Dushanbe.

Some are orphans of Tajik IS fighters killed in Iraq. Others are the children of the Tajik women who’ve been imprisoned in Iraq for their links to IS.

Some of those women were sentenced to death. Others are still waiting for a trial. Dushanbe is trying to reach a deal with Iraqi officials where those women would serve their prison terms in Tajikistan.

Relatives of returnees were being allowed rare visits with the children. But even those short visits were suspended after the outbreak of the pandemic.

A Tajik official familiar with the process told RFE/RL on condition of anonymity that teachers, psychologists, and other specialists had been working to help those children adapt to their new lives in Tajikistan.

The official noted challenges in the rehabilitation process of the vulnerable children who’ve been deeply traumatized by living in the Syrian war zone and in some cases, witnessing the deaths of their own parents and siblings.

The older children were particularly vulnerable as they remember more, the official said. Some of them went to IS “schools,” where they were indoctrinated with extremist ideologies and taught to use weapons to attack and kill.

“One boy said that it’s easier for him to disassemble and reassemble a Kalashnikov [assault rifle] than it is to read a book,” the official said.

Asked about the children’s contact with their relatives in Tajikistan, the official said many of the younger ones hadn’t properly bonded with them.

They were babies when their parents took them to Iraq, he explained, so they don’t remember their relatives. Others were born in Iraq or Syria and simply don’t know anyone in Tajikistan.

No date has been set for the children to be reintegrated into regular schools in Tajikistan. Officials tell RFE/RL they will remain within closed facilities until they’re fully ready.

Asked about the prospects of reuniting the children with relatives, the official said that only grandparents had the right to apply for guardianship. “As for uncles, aunts, and other relatives, it’s a complex legal issue,” he said.

The Tajik government has taken a somewhat forgiving approach for its citizens who left to join IS in Syria and Iraq.

In 2015, the government announced an amnesty to all non-combatants if they voluntarily return home and repent their actions. That policy led to dozens of Tajiks returning home and resuming normal lives after a brief period of questioning.

Only a handful of militants and recruiters have been put on trial and sentenced to prison upon their return.

Many returnees take part in the Tajik government’s anti-terrorism campaign, warning young people and their parents about the dangers of joining extremist groups.

“Such a stance stems from Tajikistan’s experience in its civil war of the 1990s when some Tajik families and children were left behind in Afghanistan,” Zubaidzoda said. “Several years later, they resurfaced as members of various extremist groups in Afghanistan and the tribal areas of Pakistan.”