This holiday season looks a little different with people around the world paring down their celebrations and taking their festivities online. But for wrongfully convicted people who have recently gained their freedom, this quiet holiday season represents a major milestone.

“Thanksgiving was great — my sister and I had a quiet little meal for our first Thanksgiving together in over 30 years,” said Ron Jacobsen, who was freed on bail last month after 30 years of wrongful incarceration.

Mr. Jacobsen said the best part of his thanksgiving meal, which included all the holiday staples, was the turkey, cooked by his sister Gladys.

He and Gladys have spent the last month catching up after three decades apart. Mr. Jacobsen, a New York native, was wrongly convicted of a 1990 kidnapping and rape in Georgia. Though Mr. Jacobsen was excluded as the attacker by DNA testing secured by the Innocence Project and Georgia Innocence Project in 2017, his conviction wasn’t overturned until two years later. However, the Newton County District Attorney’s Office then announced it would re-try Mr. Jacobsen and opposed his release on bail ahead of his retrial.

In October, Mr. Jacobsen was finally granted a new bond hearing at which the court set his bail at a half-million dollars. Within a week more than 1,300 people donated to his family’s effort to raise the $55,000 non-refundable fee to pay a bondsman and bail him out. He was freed shortly after and has been enjoying being at home while he continues to fight for justice. 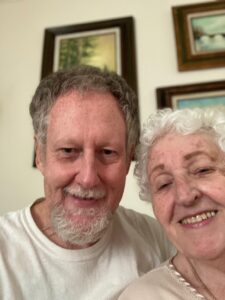 “The best part of being home so far has been just being with my sister and getting to walk outside without someone saying, ‘Where are you going?’ Just those little freedoms,” said Mr. Jacobsen. He and his sister will be celebrating Christmas at home together this year.

Robert DuBoise, who was freed in August and officially exonerated the following month, also said the best part of this holiday season has been spending time with family.

“Thanksgiving was really good because I was able to get my mom and my sister together, which was really important to me,” Mr. DuBoise said. “They haven’t been able to spend a Thanksgiving together since they were teenagers. So the best part to me was just getting to see them together.”

Mr. DuBoise, a vegetarian of many years, said he doesn’t get particularly excited about the traditional holiday foods, which tend to be heavy on meat dishes. Instead, he’s enjoying getting to know family members, including his nieces and nephews, who were born while he was wrongfully incarcerated.

Though he doesn’t have any big plans for Christmas, he recently set up his Christmas tree, which he decorated himself.

Despite the difficulties of this year, there have still been many reasons to celebrate. Seven Innocence Project clients — including Mr. Jacobsen and Mr. DuBoise, were freed this year — and two more clients who were already free were finally and fully exonerated.

But there is still more work to be done to address and prevent wrongful convictions in the new year.

Mr. Jacobsen said that while he was incarcerated he had limited access to information and the news, but since being home he has been learning more about the issues that contribute to wrongful conviction beyond his own and to understand the greater extent of this injustice.

“I’m losing sleep because I just want to put the word out [about wrongful convictions] and advocate as someone who lived through it and is still fighting for justice,” Mr. Jacobsen said.