This story was originally published by Yale Environment 360 and is reproduced here as part of the Climate Desk collaboration.

Thomas Mnguni often woke to find the windows and floors of his home covered in a layer of black dust. Living between two coal mines and a landfill in Middelburg, South Africa, he and his family breathed some of the country’s most polluted air.

When Mnguni’s son developed symptoms of asthma, a doctor recommended that the family move to a different part of town. Now living about six miles from the mines, the 14-year-old is doing better. But others in the area aren’t so fortunate. Residents of Middelburg and other communities in an industrialized swath of the Highveld, a plateau in central South Africa, are well acquainted with air pollution and its toll on health. The area — located east of Johannesburg and with a population of 4.7 million — is riddled with coal mines, coal-fired power plants, petrochemical facilities, metal smelters, chemical producers, and other industrial complexes. Mnguni, in his work as a community campaigner for the environmental group groundWork, has met many others dealing with the health consequences of the poor air quality, ranging from asthma to lung cancer.

Researchers estimate that heightened air pollution levels in the Highveld cause hundreds of early deaths every year. A 2019 Greenpeace report ranked the region among the highest in the world for emissions of two dangerous pollutants, sulfur dioxide and nitrogen dioxide. “It’s emblematic of one of the worst situations of air pollution in the world,” says David Boyd, a United Nations specialist on human rights and the environment. A substantial portion of the Highveld’s population lives in townships — underdeveloped areas on the outskirts of towns— among the mines or in the shadows of industrial facilities.

The Highveld’s rampant pollution is largely a product of South Africa’s longstanding dependence on coal, which provides nearly 90 percent of the country’s electricity. Close ties between members of South Africa’s ruling party and the coal sector have perpetuated its dominance, enriching a few to the detriment of many. With about half of the country’s recoverable reserves, the Highveld is where the majority of the extraction and burning takes place. In the past century, billions of tons of coal have been dug out of the region’s shallow seams through open-cast and underground mines, and industrial facilities have bloomed near the vast, cheap energy source.

A landscape of rolling grasslands and farm fields is increasingly dominated by smokestacks and an ever-expanding network of mines. The Highveld is now home to 12 coal-fired power plants and a massive refinery that produces liquid petroleum from coal. This single facility, owned by the South African company, Sasol, generates more greenhouse gas emissions than entire countries such as Norway and Portugal.

Last year, environmental groups, including groundWork and the Vukani Environmental Movement, filed suit against the South African government for its failure to clean up the choking air pollution, arguing that it violates the residents’ constitutional right to “an environment that is not harmful to their health and well-being.” The case will be heard in court in May, lawyers involved in the litigation recently announced.

It’s the first court case in South Africa to challenge air pollution on the basis of this constitutional right, but the litigation could have implications internationally as well. While few countries recognize clean air as a fundamental right, more than 150 acknowledge the right to a healthy environment, according to Boyd. He says the South Africa case could make tackling air pollution a human rights obligation, adding, “Right now, it’s not clear that the right to a healthy environment includes the right to breathe clean air.”

Rico Euripidou, groundWork’s environmental health campaigner, says that “the South African government has this notion in their minds that coal is a gift,” and notes that the ongoing pollution in the Highveld has much to do with industrial activity that benefits the country’s elites. In the first half of the 20th century, the state-owned utility, Eskom, used coal to provide low-cost electricity to gold and diamond mining operations. During the apartheid era, which lasted from 1948 to 1994, the government built more coal-fired power plants and created Sasol to turn coal into fuel, further linking state and corporate interests.

Air pollution in the Highveld regularly exceeds South Africa’s national air quality standards. In 2018, particulate matter sized 2.5 microns or less exceeded national air quality standards on at least 103 days, according to data from government air quality monitoring stations. These fine particles get into the deepest parts of the lungs and can even infiltrate the bloodstream, causing a variety of ailments, including cardiovascular disease and cancer. Since South Africa’s air quality standards are weaker than the World Health Organization’s (WHO) guidelines, these extreme levels present a significant health hazard, says Peter Orris, professor of environmental and occupational health sciences at the University of Illinois at Chicago. In 2019, the Centre for Environmental Rights, the law firm leading the ongoing legal battle, asked Orris to review the health effects of pollutants from the region’s coal-fired power plants and refineries. 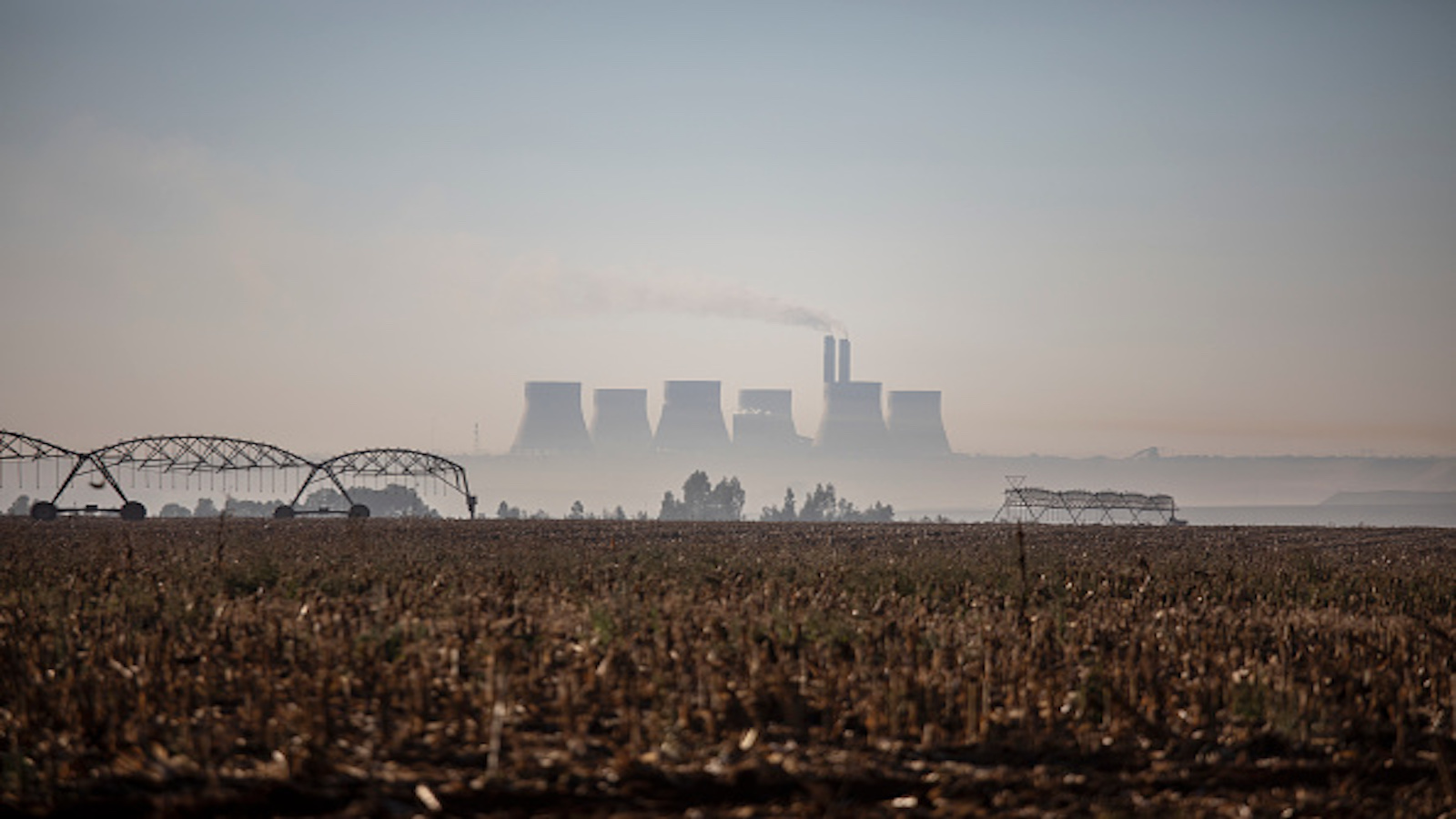 The Kendal Power Station located in eMalahleni , part of the Highveld region turned over to mines and power plants in 2019. Photo credit should read WIKUS DE WET / AFP via Getty Images

In a 2019 analysis, H. Andrew Gray, an air pollution expert consulting with the Centre for Environmental Rights, estimated that, at their peak, sulfur dioxide and nitrogen dioxide levels in the Highveld’s industrial region are 10 times higher than those the WHO considers safe for human health.

In Middelburg, asthma is common, says Elise de Kock, a general practitioner at a local hospital. Compared to Johannesburg, asthma cases also tend to be more severe and often land people in the hospital, which she suspects may be due to the pollution. According to Gray’s report, fine particulate matter from the Highveld’s 12 coal-fired power plants and two refineries likely causes at least 300 early deaths per year.

Thirteen years after the South African government vowed to clean up the Highveld’s air, there has been little progress. “We’re now getting to the end of 2020, and the majority of those goals haven’t been achieved,” says Timothy Lloyd, an attorney at the Centre for Environmental Rights who is handling the ongoing lawsuit. “We still see these really toxic levels of air pollution.”

South Africa’s unemployment rate is roughly 30 percent, and groundWork’s Mnguni says people often move to the Highveld seeking work in coal-related industries, only to find themselves unable to leave. The hope of getting a job in the mines is the reason that Promise Mabilo, coordinator of the Vukani Environmental Movement, moved to the eMalahleni 23 years ago. Shortly after joining her in the Highveld, her son developed asthma and bronchitis. Growing up, his illness often kept him home from school, sometimes for months at a time, Mabilo says. The winter months, when meteorological phenomena called inversions trap pollution near the ground, are still difficult for him. On some days, the air is so thick “you can’t even see your neighbor,” she says.

Through the litigation, groundWork and the Vukani Environmental Movement hope to see the federal government create regulations to enforce the management plan it created back in 2012. Right now, it’s just “a paper tiger sitting in someone’s office,” says groundWork’s Euripidou. From April 2016 to December 2017, Eskom exceeded its emissions limits for particulate matter, sulfur dioxide, and nitrogen oxides more than 3,000 times, according to an analysis commissioned by the Centre for Environmental Rights.

Air quality monitoring is also lacking. Many of the region’s monitoring stations are not functional, according to the government’s midterm review of the Highveld management plan. And although the government tightened sulfur dioxide emissions standards for combustion installations in April, the limits are still significantly weaker than China’s and India’s — two other developing nations with high levels of pollution.

Meanwhile, the government allows some of the region’s biggest polluters to dodge complying with emissions limits. In 2013, Eskom submitted applications to postpone compliance at 11 of its coal-fired power plants located in the Highveld Priority Area, which the government largely granted. According to a public inquiry, Eskom also was involved in former President Jacob Zuma’s corrupt use of public enterprises. In 2015, while Zuma was in office, the utility awarded a lucrative contract to a mining company owned by his son and his wealthiest supporters, the Gupta family, despite its low-quality coal, according to media reports. In recent years, Eskom has submitted additional applications to postpone, suspend, or alter emissions limits at some of its plants, which are now being reviewed.

Eskom estimates that bringing its entire fleet of power stations into compliance with emissions limits for all pollutants would cost about 300 billion rand ($19.4 billion), says Deidre Herbst, Eskom’s environmental manager. Instead, the company plans to pursue a lower-cost option by retrofitting plants to control particulate matter, which has a significant impact on health, and decommissioning 10 of its coal-fired power plants in or near the Highveld by 2040, she says.

For now, however, coal remains the country’s favored energy source. According to a federal energy plan, it will make up the bulk of South Africa’s energy mix at least until 2030. Mnguni hopes that a favorable court ruling on the 2019 suit will force the government to hold polluters accountable. But so far, the government’s track record isn’t encouraging. “They seem to be defending industries more than defending basic human rights,” he says.

Meanwhile, as residents wait for change, they are stuck relying on the same industries that make them sick. “We are trapped in this place,” says Mnguni.