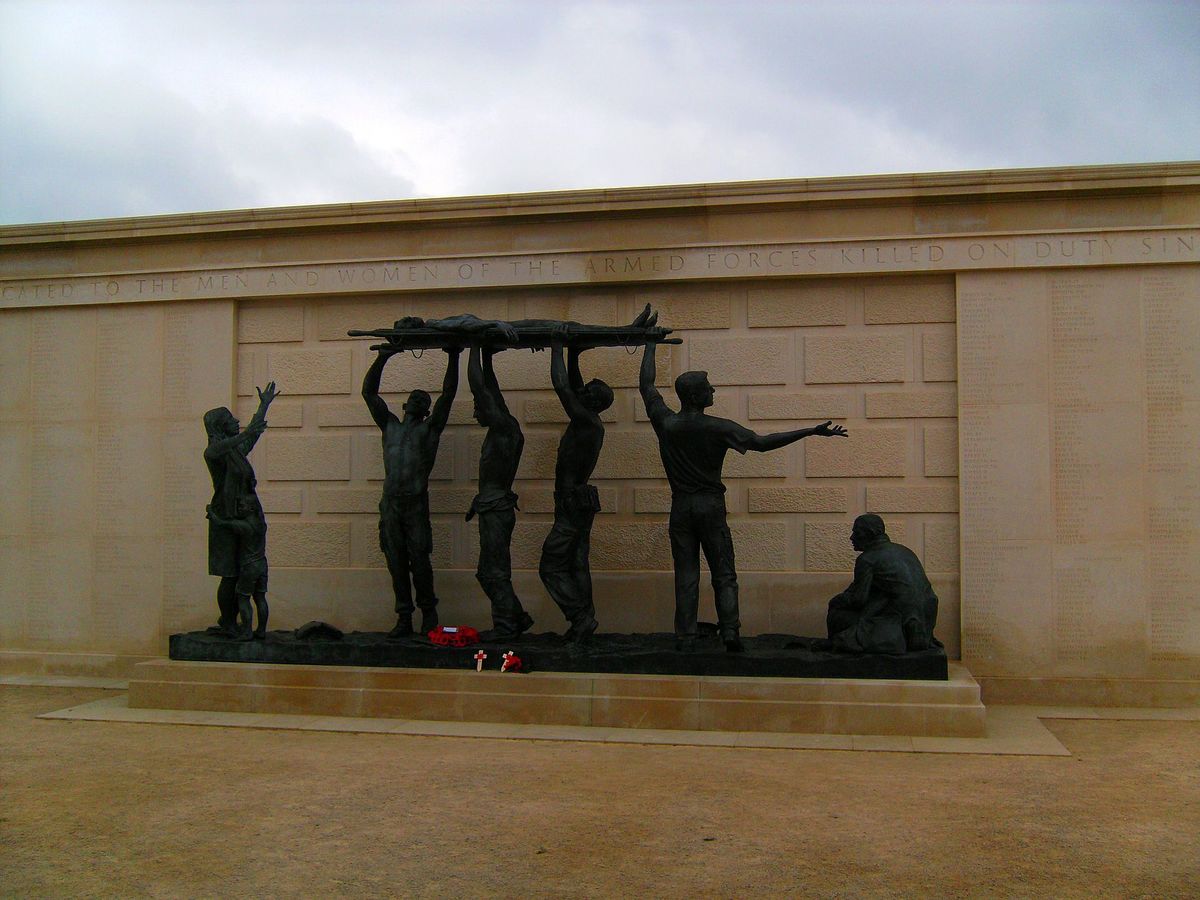 Britain’s Armed Services Memorial is a silent, haunting place. Set in the rural beauty of Staffordshire, in an arboretum of some 30,000 trees and sweeping lawns, its Homeric figures celebrate determination and sacrifice.

The names of more than 16,000 British servicemen and women are listed. The literature says they “died in operational theatre or were targeted by terrorists”.

On the day I was there, a stonemason was adding new names to those who have died in some 50 operations across the world during what is known as “peacetime”. Malaya, Ireland, Kenya, Hong Kong, Libya, Iraq, Palestine and many more, including secret operations, such as Indochina.

Not a year has passed since peace was declared in 1945 that Britain has not sent military forces to fight the wars of empire.

Not a year has passed when countries, mostly poor and riven by conflict, have not bought or have been “soft loaned” British arms to further the wars, or “interests”, of empire.

Empire? What empire? The investigative journalist Phil Miller recently revealed in Declassified that Boris Johnson’s Britain maintained 145 military sites – call them bases — in 42 countries. Johnson has boasted that Britain is to be “the foremost naval power in Europe”.

In the midst of the greatest health emergency in modern times, with more than 4 million surgical procedures delayed by the National Health Service, Johnson has announced a record increase of £16.5 billion in so-called defence spending – a figure that would restore the under-resourced NHS many times over.

But these billions are not for defence. Britain has no enemies other than those within who betray the trust of its ordinary people, its nurses and doctors, its carers, elderly, homeless and youth, as successive neo-liberal governments have done, Conservative and Labour.

Exploring the serenity of the National War Memorial, I soon realised there was not a single monument, or plinth, or plaque, or rosebush honouring the memory of Britain’s victims — the civilians in the “peacetime” operations commemorated here.

There is no remembrance of the Libyans killed when their country was wilfully destroyed by Prime Minister David Cameron and his collaborators in Paris and Washington.

There is no word of regret for the Serbian women and children killed by British bombs, dropped from a safe height on schools, factories, bridges, towns, on the orders of Tony Blair; or for the impoverished Yemeni children extinguished by Saudi pilots with their logistics and targets supplied by Britons in the air-conditioned safety of Riyadh; or for the Syrians starved by “sanctions”.

There is no monument to the Palestinian children murdered with the British elite’s enduring connivance, such as the recent campaign that destroyed a modest reform movement within the Labour Party with specious accusations of anti-Semitism.

Two weeks ago, Israel’s military chief of staff and Britain’s Chief of the Defence Staff signed an agreement to “formalise and enhance” military co-operation. This was not news. More British arms and logistical support will now flow to the lawless regime in Tel Aviv, whose snipers target children and psychopaths interrogate children in extreme isolation. (See the recent shocking report by Defense for Children, Isolated and Alone).

Perhaps the most striking omission at the Staffordshire war memorial is an acknowledgement of the million Iraqis whose lives and country were destroyed by the illegal invasion of Blair and Bush in 2003.

ORB, a member of the British Polling Council, put the figure at 1.2 million. In 2013, the ComRes organisation asked a cross-section of the British public how many Iraqis had died in the invasion. A majority said fewer than 10,000.

How is such a lethal silence sustained in a sophisticated society? My answer is that propaganda is far more effective in societies that regard themselves as free than in dictatorships and autocracies. I include censorship by omission.

Our propaganda industries – both political and cultural, including most of the media – are the most powerful, ubiquitous and refined on earth. Big lies can be repeated incessantly in comforting, credible BBC voices. Omissions are no problem.

A similar question relates to nuclear war, whose threat is “of no interest”, to quote Harold Pinter. Russia, a nuclear power, is encircled by the war-making group known as Nato, with British troops regularly “maneuvering” right up to the border where Hitler invaded.

The defamation of all things Russian, not least the historical truth that the Red Army largely won the Second World War, is percolated into public consciousness. The Russians are of “no interest”, except as demons.

China, also a nuclear power, is the brunt of unrelenting provocation, with American strategic bombers and drones constantly probing its territorial space and – hooray – HMS Queen Elizabeth, Britain’s £3billion aircraft carrier, soon to sail 6,500 miles to enforce “freedom of navigation” within sight of the Chinese mainland.

Some 400 American bases encircle China, “rather like a noose”, a former Pentagon planner said to me. They extend all the way from Australia, though the Pacific to southern and northern Asia and across Eurasia.

In South Korea, a missile system known as Terminal High Altitude Air Defense, or THAAD, is aimed point-blank at China across the narrow East China Sea. Imagine Chinese missiles in Mexico or Canada or off the coast of California.

A few years after the invasion of Iraq, I made a film called The War You Don’t See, in which I asked leading American and British journalists as well as TV news executives – people I knew as colleagues — why and how Bush and Blair were allowed to get away with the great crime in Iraq, considering that the lies were not very clever.

Their response surprised me. Had “we”, they said – that is journalists and broadcasters, especially in the US — challenged the claims of the White House and Downing Street, investigated and exposed the lies, instead of amplifying and echoing them, the invasion of Iraq in 2003 probably would not have happened. Countless people would be alive today. Four million refugees would not have fled. The grisly ISIS, a product of the Blair/Bush invasion, might not have been conceived.

David Rose, then with the London Observer, which supported the invasion, described “the pack of lies fed to me by a fairly sophisticated disinformation campaign”. Rageh Omah, then the BBC’s man in Iraq, told me, “We failed to press the most uncomfortable buttons hard enough”. Dan Rather, the CBS anchorman, agreed, as did many others.

I admired these journalists who broke the silence. But they are honourable exceptions. Today, the war drums have new and highly enthusiastic beaters in Britain, America and the “West”.

Take your pick among the legion of Russia and China bashers and promoters of fiction such as Russiagate. My personal Oscar goes to Peter Hartcher of the Sydney Morning Herald,whose unrelenting rousing drivel about the “existential threat” (of China/Russia, mostly China) was illustrated by a smiling Scott Morrison, the PR man who is Australia’s prime minister, dressed like Churchill, V for Victory sign and all. “Not since the 1930s ….” the pair of them intoned. Ad nauseum.

Covid has provided cover for this pandemic of propaganda. In July, Morrison took his cue from Trump and announced that Australia, which has no enemies, would spend A$270 billion on provoking one, including missiles that could reach China.

That China’s purchase of Australia’s minerals and agriculture effectively underwrote the Australian economy was “of no interest” to the government in Canberra.

The Australian media cheered almost as one, delivering a shower of abuse at China. Thousands of Chinese students, who had guaranteed the gross salaries of Australian vice-chancellors, were advised by their government to go elsewhere. Chinese-Australians were bad-mouthed and deliverymen were assaulted. Colonial racism is never hard to revive.

Some years ago, I interviewed the former head of the CIA in Latin America, Duane Claridge. In a few refreshingly honest words, he summed up “Western” foreign policy as it is ordained and directed by Washington.

The super-power, he said, could do what it wanted where it wanted whenever its “strategic interests” dictated. His words were: “Get used to it, world.”

I have reported a number of wars. I have seen the remains of children and women and the elderly bombed and burned to death: their villages laid to waste, their petrified trees festooned with human parts. And much else.

Perhaps that is why I reserve a specific contempt for those who promote the crime of rapacious war, who beckon it with bad faith and profanities,  having never experienced it themselves. Their monopoly must be broken.

This is a version of an address John Pilger gave to a Stop the War fund-raiser, Artists Speak Out, in London.

The post The Most Lethal Virus is Not COVID. It is War appeared first on CounterPunch.org.