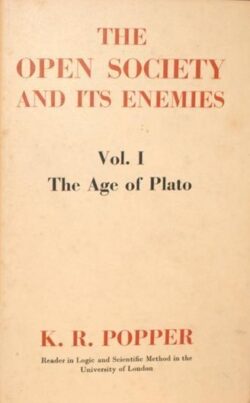 I admittedly approached this work with some skepticism about Karl Popper’s well-known “open” vs. “closed” dichotomy (which indeed is only distinguished, and quite vaguely, in Chapter 10).  Written in the early 1940s, the book is clearly a period-piece, with some useful things to say about totalitarian “utopianism” (and the ethnic-racialistic “cleansing” which sometimes accompanied it).

For this essay, I’m restricting my criticisms to vol. 1, “The Spell of Plato.”  In my opinion, Popper’s choice to present Plato’s Republic and The Laws as providing the blueprint for later 20th century, collectivist-nationalist dictatorships is ill-conceived.  Yes, Plato advocated “racial breeding,” total indoctrination (thought-control), a rigid caste system, and so forth.  But Popper is insufficiently historicist: after all, Plato’s politics was ultimately based on a peculiarly Orphic-Pythagorean metaphysics, in which a timeless, purified, perfectly designed State would mirror the absolute Forms and Ideas thought to be the ultimate reality.

Another major failing, I think, is Popper’s sloppy use of the already vague term “tribalism,” to subsume any manifestations of ethnic-identification, shared culture, “nationalism,” “group egoism,” and the like.  Anthropologists could have provided the much-needed concept of “ethnocentrism” — and how, for instance, even the slave-holding, “democratic” Athenians Popper so admires glaringly exhibited it.  Popper fulminates endlessly about the dangerous, irrational tribalism of Sparta — which he contrasts to an Athenian imperialism which may have positively brought “democracy” to benighted tribalists.  (Sound familiar?).  The slaughtered people of the island of Melos certainly didn’t experience it that way.   In praising Athenian “democracy,” Popper only cursorily acknowledges that its economy was based on slavery (non-Greek slaves comprising the majority of the city’s population).  Popper’s idol, the imperialist ruler Pericles, had limited citizenship to those born of native Athenians — but this was merely “a dubious concession to the popular tribal instincts.” (Popper also conspicuously omits any questioning of the exclusion of the Athenian women from civic rights.)

From Plato, Popper argues, it was then only a short leap to Rousseau’s “General Will” (and thus Robespierre,etc.).  But what of the centuries-old power struggles between European landed aristocracies and the Court — with monarchs invariably legitimating their power as a “divine right” (further cemented with monotheism, another aspect which Popper neglects)?  And “divine” emperors often ruled over urbanized, polyglot populations (cities being regional marketplaces).  One would think that, commercial markets notwithstanding, a truly “open society” would require de-centralized political power, literacy and libraries, as well as secularized polytheism in preference to monotheism — none of which he discusses at any length.

Ultimately, my major criticism is Popper’s relative lack of substantiating historical detail — compared to, say, the great sociologists Max Weber, Tonnies, Simmel, and Durkheim.  Yet their incisive theories far surpass Popper on the issues of Gemeinschaft, social order, national solidarity, and “modernity.”  Moreover, when Popper was writing this tome around 1940, the “Frankfurt school” of social-psychological thinkers had already developed quite penetrating theories regarding fascism, totalitarianism, and “the authoritarian personality” (cf. Erich Fromm’s Escape From Freedom, 1941).  In his unremitting hatred for “tribal” (cultural) irrationalism, Popper also seems to overlook the irrational, cultural roots of modern capitalism (cf. Max Weber’s The Protestant Ethic and the Spirit of Capitalism, 1905).

Popper’s “closed society” is vigilantly nationalistic, with narrow-minded, sanctified dogma and stringent boundaries against outside influences.  Yet certainly in the world today, near-totalitarian societies may be the big players in world trade, thanks to the “trade agreements” brokered by transnational corporations.  The pre-Gorbachev Soviet Union, “closed” in many respects, nonetheless claimed in principle to have transcended ethnic loyalties on behalf of a universalizing class-egalitarianism and “Soviet humanism.”

As to Popper’s overall schema and style, I was disappointed.  I had expected more scholarly rigor — with many in-text citations from leading scholars to strengthen his arguments.  Instead (despite the end-notes), the book reads like a somewhat discursive lecture — strong, preconceived arguments, with inadequate substantiation.  In sum, despite an apparent display of massive erudition, Popper’s opinionated writing style — with its unfortunate penchant for vague, simplistic dichotomies (e.g., “tribalism” vs. “democracy”) — almost conveys the impression of a second-rate proselytizer rather than a first-rate scholar and thinker.

This article was posted on Wednesday, December 16th, 2020 at 12:45pm and is filed under Book Review.