The jingoist nation and nationalism have got weaponized by the political class to destroy dissent and polarize people. The mass frenzy has accomplished complete derationalization and inversion of meanings where destroyers of the nation become deshbhakts (patriots) and selfless servers of people become deshdrohis (traitors). As I see my India being ruined, it is with a feeble hope that I write to you at such a grim moment. Well, I’m off to National Investigative Agency custody and do not know when I shall be able to talk to you again. However, I earnestly hope that you will speak out before your turn comes. — Excerpted from ‘Anand Teltumbde’s Letter to the People of India Before His Imminent Arrest,’ Countercurrents, April 13.

The Dalit scholar, writer, and activist Anand Teltumbde wrote an open letter to the people of India the day before he was arrested by the state under fabricated charges of inciting violence between Dalits (formerly known as untouchables) and the Maratha community of Maharashtra in western India in 2018, as well as attempting to assassinate Prime Minister Narendra Modi.

In 1818, members of the Mahar (Dalit) community of Maharashtra had fought in the victorious battle of Bhima Koregaon on the side of the British against the upper-caste Peshwas, bringing an end to their rule. Thirty-three years later, a victory pillar (Vijay Sthamb) was constructed in Bhima Koregaon at the battle site. It included the names of the fallen Mahar soldiers. The first commemoration event was held on January 1, 1928 and was led by India’s father of the Constitution, the Dalit-rights leader B.R. Ambedkar. Every year since, “Ambedkarite Dalits” from all across the state have gathered there to celebrate Mahar “valor and pride.”

On January 1st, 2018, thousands of Dalits had gathered at the Vijay Sthamb to celebrate the 200th anniversary of the Battle of Koregaon when violence broke out. The celebrants were attacked by Hindutva (Hindu nationalists) activists waving saffron flags, torching vehicles and pelting stones, killing one person and injuring many others.

Protests were organized throughout Maharashtra in response to the attack. Apart from 70-year-old Anand Teltumbde, fifteen other prominent Dalit rights activists and public intellectuals associated with the gathering were arrested and their homes raided across the country. They were arrested under the Unlawful Activities Prevention Act (UAPA), a draconian law designed to target Indian citizens who are critical of government policies, thereby nullifying the Constitution’s guarantee of democratic rights and civil liberties.

The acclaimed historian of the Ambedkarite movement Eleanor Zelliot noted that the monument began to be used as a gathering place for Mahar meetings in the 1920s and 1930s, ‘with the memorial to Mahar soldiers who have fought a victorious battle serving as inspiration for a more modern struggle.’ — Dwaipayan Sen, The Wire, May 16.

Social constructs like racism and inequity in the U.S. are fruit of the tree of systemic white supremacy and injustice. In India, or JatiIndia—my name for this nation of jatis/castes—the social hierarchical structure of jatiism/casteism stems from the country’s tree of systemic upper-caste supremacy and injustice. Dalits and Black and Brown people have been resisting this injustice in their respective countries for centuries.

Protesters and counter-protesters alike tend to gather around flags as they do around monuments when they want to score gestural points for their side. They alternately shape and resist modern-day supremacy in so-called democracies like the U.S. and India. For both the resisters of injustice and its perpetrators, they can act as a medium, a link in the long chain that connects an unjust past to an unjust present, and in all probability, a capitalist, extractive, unjust future.

According to the state and the perpetrators of violence, the distinction of who is a deshbhakt and who is a deshdrohi depends on the hand that’s waving the flag, or the feet that gather around historic monuments like the Vijay Sthamb, or the voices that project their position and their intent toward a certain segment of society. 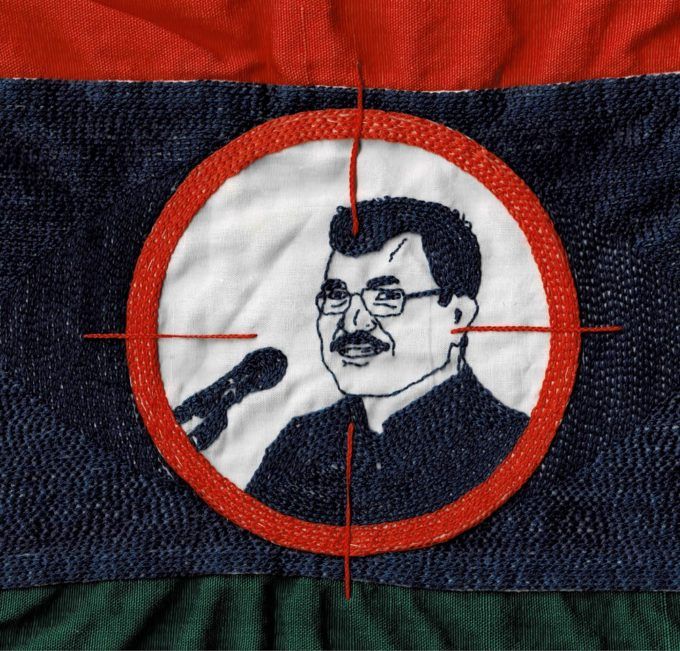 JatiIndia: Flags of Atrocities Caste, Present and Future is a continuing series that features a face of resistance to systemic injustice in the center of a modified Indian flag. The color orange in the flag symbolizes long-existing casteism, now made more open and feverish by resurgent Hindutva politics; blue—a color historically adopted by the Dalit movement—here honors all of JatiIndia’s and occupied Kashmir’s resisters of supremacy and injustice; the bottom green bar embodies JatiIndia’s ecological foundations, which are endangered by the ideology of extractive capitalism and defended by the country’s Adivasi (indigenous) communities and others, including Kashmiris resisting occupation. The circular image in the center, replacing the Dharma Chakra (Wheel of Law) signifies the view through the crosshairs of a saffron (Hindu nationalist) gunsight.

The blue strip in the middle of the flag featured here is done in chain-stitch embroidery, illustrating the long chain of atrocities that have been carried out by JatiIndia over the years on Dalits, Kashmiris, Adivasis and other minorities. Each blue stitch, of which there are more than twenty thousand in the blue strip, represents a face of resistance to systemic state violence.

This flag with Anand Teltumbde’s face at the center is number nineteen in my JatiIndia series. If you’d like to see and read about numbers one through eighteen, you can view them here.