WASHINGTON – This morning, Demand Progress released a new report “Americans Want a Progressive Biden Administration” demonstrating broad, cross-party support for keeping corporate insiders outside the administration. Notably, the polling shows that 56 percent of Americans don’t want Biden to appoint corporate execs, consultants, or lobbyists, while only 23 percent indicate support for doing so — suggesting that is not just the right thing to do, but the smart political move for Biden.

“As the Biden administration takes shape, the Beltway insider consensus is that the path to achieving bipartisanship runs through installing corporate-friendly officials in key posts,” said Demand Progress Executive Director David Segal. “But our polling shows what is common sense outside of the Beltway: The DC insiders are dead wrong. People across party lines want an administration that is run by people who care about the public interest — not by corporate executives, lobbyists, and consultants.”

Key findings from the polling below. You can find the full report here. 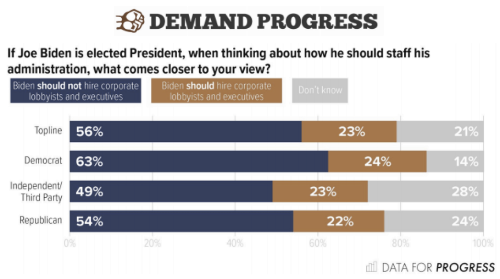