The village of Taghavard lies at the end of a winding road 45 minutes southeast of Stepanakert, the main city in Nagorno-Karabakh and the capital of the ethnic Armenians’ self-declared Republic of Artsakh.

Taghavard is a sprawling place that had about 1,300 inhabitants before the war started in September. The rickety village’s houses stretch out for 4 kilometers along either side of the main road that defines the hamlet.

Before one has traveled even half that distance, however, the tranquil rural scenery is interrupted.

The road is suddenly cut off by a checkpoint manned by soldiers of the “Artsakh Defense Army” (as the self-proclaimed republic’s armed forces are known), and a sign indicating a minefield ahead.

Just beyond the checkpoint lies the other half of the village — and the Azerbaijani soldiers who control it.

“On October 27, a huge number of Azerbaijani soldiers entered the village,” says Oleg Harutiunian, 61, the mayor of the village. “We couldn’t hold our positions. We had to pull back.”

Taghavard and its surroundings witnessed some of the heaviest fighting of the war. The nearby town of Karmir Shuka changed hands multiple times, as Azerbaijani soldiers entered the settlement only to be pushed back by spirited counterattacks by the ethnic Armenians (the town is still in Armenian hands).

Hills just south of Taghavard that are held by Azerbaijani forces.

While Taghavard itself is nothing special, its position is: it lies astride the axis where Azerbaijani troops punched northwest towards Susa (Shushi in Armenian), the key central Karabakh city which overlooks Stepanakert. Susa’s capture on November 9 effectively marked the end of the war.

Harutiunian reckons this singular Azerbaijani focus — to take Susa — is what enabled Armenian forces to retain control of the half of Taghavard they still hold. “[Azerbaijan] didn’t want this village,” he says. “They just needed the road to Shushi.”

The corridor seized by Azerbaijani forces as part of their drive to Susa is indeed quite narrow. Near the entrance to Taghavard one can see an Azerbaijani camp, its blue-red-and-green flag waving conspicuously less than a kilometer away in the fields to the northwest.

‘I Could See My Own House On Fire’

The November 10 truce deal that officially ended the fighting has had little meaning for the people of Taghavard.

Harutiunian estimates the homes of some 600 of the village’s roughly 1,300 inhabitants are located in the Azerbaijani-held portion of the settlement. Many of them are likely no longer standing.

“[The Azerbaijanis] burned the houses after they entered [the village],” Harutiunian says. “From over here, I could see my own house on fire.”

The village head now lives in Stepanakert, from where he commutes to Taghavard daily to work on what’s left of the village.

Very few of Taghavard’s residents have been able to return. The only people visible on the road or at the village administration are men, volunteers in the local militia. 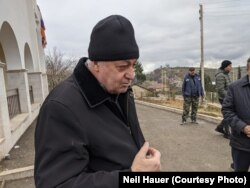 “Almost none of the women and children have been able to come back,” says Harutiunian. “How can they be safe? The Azerbaijanis are right there,” he says, pointing to a hillside barely 500 meters away. Two Azerbaijani soldiers are visible there, standing in front of a ruined building.

The danger Harutiunian speaks of is not speculative. Several times while talking during his interview, cracks of gunshot can be heard.

Ethnic Armenian soldiers in the village are billeted in an abandoned house near the checkpoint on the front line. In a brief conversation before their superiors arrive and forbid them from saying more, they confirm that the cease-fire is not holding here.

“The Azerbaijanis have been firing at us all day,” says Artur, 20. “We have not returned fire but we have suffered casualties.”

“It’s a sniper war now,” says another young soldier who does not want to give his name.

Russia’s peacekeeping contingent, stretched thin along a line of contact that extends for roughly 300 kilometers around the remainder of Armenian-held territory in Nagorno-Karabakh, is not present in Taghavard.

The Russians’ nearest position — a small checkpoint with a dozen soldiers and two BTR infantry fighting vehicles — is more than 5 kilometers away.

“The Russians aren’t here,” Harutiunian confirms. “I don’t know why. There is just the flag,” he says, gesturing to a Russian tricolor hanging across the middle of the no-man’s-land minefield that marks where Armenian control ends and the Azerbaijani presence begins.

Confusion reigns over where the lines of control throughout southern Karabakh are supposed to be.

The tripartite agreement signed on November 10 stipulates in its first clause that both Armenian and Azerbaijani forces “shall stop in their current positions.” But this has not stopped the more numerous and better equipped Azerbaijan troops from attempting to seize additional land.

On December 12, Azerbaijani troops attacked the villages of Hin Tagher (Kohne Taglar in Azeri) and Khtsaberd (Caylaqqala), two Armenian-held settlements about 30 kilometers south of Stepanakert that were not captured during the war. An estimated 73 ethnic Armenian servicemen were taken prisoner as a result, and the head of Hin Tagher later confirmed that Azerbaijan had taken control of the village.

Russian peacekeepers were not in the area before the attack. While a contingent of Russians later arrived and negotiations are ongoing over the final status of the villages, the incident poses a major challenge to the effectiveness of the Russian peacekeeping mission.

Harutiunian, meanwhile, remains confident that negotiations will resolve the situation in his village in Armenia’s favor.

“I talked to the head of the Martuni region,” he says, referring to the Artsakh “province” to which Taghavard belongs. “He is in close contact with the Russians and he assures me we will get the rest [of the village] back.”

If this does not occur and the village remains split, it is difficult to see how ethnic Armenian civilians will be able to return to it.

“Of course no one will live here with the enemy right there,” scoffs Harutiunian. “No one will return to Karmir Shuka either,” he adds, referring to the nearby town of 2,000 prewar inhabitants that was heavily damaged in the fighting.

Harutiunian’s remark is punctuated but yet another gunshot ringing out in the distance.

The village of Taghavard appears to merely be part of the latest front line in this more than 30-year old conflict.