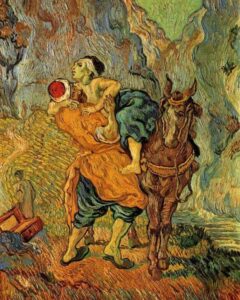 Lately, I’ve been musing about religion and politics. And more specifically, the thought that keeps recurring to me is the following: Is the idea of born agains and other Christians becoming political radicals, a far-fetched one? Or, should the question be, how could they not become  politically radical Christians?

One sees frequent references to the large number of white, born again Christians who voted for Trump and the unmistakable inference is that there is a deep, principled  gap between these folks and so-called political “radicals” that can never be bridged. For whatever reasons, that may be true for some, but I refuse to buy this sweeping generalization as the final word.

To state my case from the outset:  Whatever other difference may exist about some issues,  my understanding of what Jesus was all about and what honest Christians should take from his message, inclines me to believe that common cause is not only consistent but the best path forward for realizing what should be shared goals.

Economic elites, abetted by some faith leaders, have taken over Christianity and transformed it into a state religion which functions to legitimate and further their rule. And I won’t mince words out of fear that some might take offense: The principles of our capitalist economic system and the irreducible core of Jesus’s teaching are irreconcilable.

As a child growing up in northern Great Plains, my own religious training was in the American Lutheran church, the most fundamentalist of the synods within Lutheranism. This was the faith my grandparents brought from Scandinavia, especially rural Norway, where it was known as the “Dark Religion.” There was a heavy emphasis on sin, scripture, the devil and a stern judgmental God. I recall attending weeklong, summer Bible camps where I was “saved” more than once at campfire revival meetings. Later, I attended a private Lutheran high school and Lutheran college, both steeped in fundamentalist Lutheran doctrine.

From childhood on, I heard  Jesus’s parable of the Good Samaritan countless times in Sunday School and subsequently in sermons and required chapel and  religion courses. If there’s a bedrock principle in the Gospels, this famous parable is it.  According to Luke 10: 24-37, Jesus told the parable as part of a Socratic dialogue with an expert in Jewish law. The lawyer  asks Jesus  how to attain eternal life, a question that Jesus turns on the lawyer, asking him, “What is written in the law?” The lawyer cites Deuteronomy 6:5 about loving God with all one’s heart, soul, strength, and mind but then adds “and your neighbor as yourself.” That’s it, replies Jesus. But then, the lawyer asks, desiring to justify himself and perhaps trip up Jesus, “Who is my neighbor?” The lawyer may have wanted Jesus to demarcate some specific boundaries, thus enabling him to ignore everyone outside of them. Rather than a direct answer, Jesus responds with the parable:

“A certain man” (probably Jewish)  is walking down the seventeen mile road from Jerusalem to Jericho, a treacherous area known locally as “The Bloody Pass” where bandits were known to prey on travelers. The man is severely beaten, robbed of his clothes, and left half dead by the side of the road. At this point, two highly regarded figures from the Jewish community come along. The first to arrive was a priest who “passed by to the other side of the road.” Soon, a Levite (a priest’s helper) comes along but he also continues “on the other side.” Eventually, a stranger from Samaria stops by to help the robbery victim. Here it’s important to note the long standing enmity between Israelites and Samaritans, to the point where the two people had virtually no social contact. The Jews despised the Samaritans as apostates and the hatred was mutual. Undoubtedly, Jesus knew that his audience would find it incredible that a Samaritan would be the paragon of virtue in the parable.

The Samaritan administers first aid to the victim, takes him to an inn, and remains with him overnight. He even gives the innkeeper two denari (roughly two days wages) for any bills incurred by the man and  even promises that on his return trip he’ll reimburse the innkeeper for any additional expenses. At the end of the parable, Jesus asks the lawyer which of the three men behaved as the good neighbor to the victim. Probably squirming a bit and unable to utter the word “Samaritan,” the lawyer replied, “The man who had mercy on him.” And with that, Jesus tells the lawyer — and by extension, us —“Go and do likewise.”

For many years, perhaps like most people who hear the parable, I took it as a “Jesus wants us to help others trope,” a feel good story that a decent person should follow the  Good Samaritan’s example and come to the aid of others, even at some personal risk.  However, it wasn’t until reading Dr. Martin Luther King Jr.’s updating of the parable that I began to appreciate just how much Jesus was  a counter-culture revolutionary. I also began to recognize its updated applicability, especially when grounded in a wider socioeconomic context. Without invoking any supernatural dimension to the parable, we know there is overwhelming evidence  that (almost) all people have an innate capacity for empathy. Empathy is central to the story because it’s about being able to feel, imagine and identify with the pain of others and then engage in the appropriate response. And in the parable imparted by Jesus, the Samaritan didn’t act because of religious beliefs but was “moved by compassion.”

In our world, with all of its victims lying by the side of the road, the parable raises at least two additional lessons.  First, the Samaritan didn’t consult a checklist of prohibited victims like undocumented worker,  those with different sexual orientations,  accent, skin color, political or religious affiliation, whether he was pro-life or a member of a marginalized community.  Dr. King frequently preached about the Good Samaritan, invariably sourcing “Love Thy Neighbor” within a moral universalism and we know it’s the unifying moral principle in all the world’s great religions, including Christianity.

Second, and this directly relates to my purpose here, King cautioned that while philanthropy is commendable we can’t “overlook the circumstances which makes philanthropy necessary.”

In other words, King is suggesting that the problem is as much the identity of the robbers and the treacherous journey taken by the injured man.  It’s apparent King is suggesting that, yes, helping the injured roadside victim is laudatory but  that Jesus also means one’s neighbor is “any needy man on one of the numerous Jericho roads of life.” King is  updating the parable to mean all victims of injustice and calling out modern day pillagers and plunderers here in the United States.   Jesus’s admonition of “Go and do likewise” takes on new meaning because making the world more conducive to loving our neighbors requires one to practice what I’ve termed elsewhere “dangerous empathy.”

King and Jesus’s Jericho Road is a metaphor for radical change and as such, embodies dangerous empathy — radical love in action. Adding the adjective “dangerous” permits the parable to rise to the level of a moral stimulus package. Dangerous, because the wealthy, powerful and privileged elite in this country can’t allow such ideas to gain purchase. Just as the powers of the time saw Jesus as a threat, those promoting dangerous empathy today are branded subversive, anti-American radicals.

One doesn’t find the word “radical” in the Scriptures but the original meaning of the word describes precisely how Dr. King interpreted the meaning of the parable. And here it’s instructive to parse and get beyond the divisive and often misused word, radical. Those who own and control virtually everything that matters our country are quick to label any critics as “radical” in an effort to stigmatize and discredit them. However, the original definition of radical  comes from the Latin radicalis, from radix, or root or as in someone speaking or writing about fundamental truths. The tie-in with the Good Samaritan parable means going beyond addressing symptoms to identifying and doing something about the root causes of our neighbors’ suffering. My take is that honest Christians must unapologetically assert that Jesus’s message is totally at odds with society’s dominant culture.

Parenthetically, for this undertaking,  it won’t do for liberals or “progressives” who identify as Christians to adopt an overweening, censorious  attitude toward more conservative Christians. I say that for a reason, again grounded in Scripture, but with a important contemporary political turn. In his Sermon on the Mount, Jesus said “How can you say to your brother, ‘Let me take the mote out of  your own eye,’ when there is a beam in your own eye?  You hypocrite, first take the log out of your own eye, then you will see clearly to take the speck out of your brother’s eye.” (Matthew 7: 1-5 KJV).

The modern twist is that the beam or plank is the Democratic Party to which many liberals and “progressives” remain attached. A blinders-free Christian will  acknowledge, along with Black Agenda Report’s Danny Haiphong, that “The Democratic Party is where movements go to die and where austerity is given a friendly, more diverse face from which to shatter  the lives of working class people.” Although advertising itself as the party of compassion, even the mild reformism of the Sanders’ campaign was fiercely opposed by the Democratic establishment. And as Haiphong reminds us, the so-called progressive “Resistance” within the party  refuses to confront the fact that “The U.S. state is the enforcement mechanism of capitalism.”

Nixon campaign strategist Kevin Phillips once called  the Democrats “history’s second most enthusiastic capitalist party but it’s certainly as pro-capitalist as the Republicans. The first and last allegiance of national level Democrats is to Wall Street, to the establishment of which they’re charter members. In the words of political historian Lance Serfa, rather than undertaking radical measures to help marginalized people and working class Americans, the Democratic Party seeks to “corral them and ensure that they don’t strike out as an independent party.”  Written in 2012, we need only substitute “sheep herding them” for “corral them” to update it. In short, the Democratic Party functions as a political prophylactic seeking to prevent deep and desperately needed structural change. For Christians this would mean distrusting the state and its official religion of the market and all its attendant myths.

Finally, lest I be misunderstood , this does not mean hating plutocrats and their enablers or wishing that physical harm is visited upon them. It does mean Christians becoming dangerous Good Samaritans, working to dismantle a  system that values profits over humanity and replacing it with a democratic one that’s responsive to people’s needs. Acknowledging these truths might prove a cathartic, liberating and for many, even  a secular atonement experience. Can I get an “Amen?”