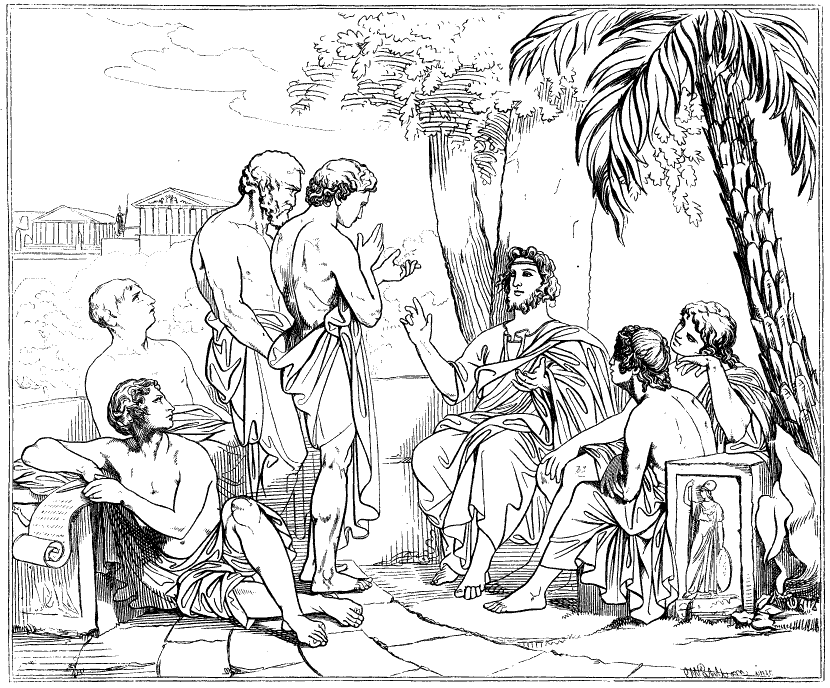 Plato in his academy, drawing after a painting by Swedish painter Carl Johan Wahlbom

In Plato’s legendary tome, Republic, Thrasymachus, responding to Socrates’ question as to whether or not he feels justice is a vice, emphatically asserts: “No, just very high minded simplicity.” Republic was written way back in 375 BC, but unfortunately “high minded simplicity” is alive and well in the intellectually ignominious year of 2020.

In the Nov 16th issue of its always intriguing IDEAS section, The Atlantic published an essay written by one of Columbia University’s astute professors, John McWhorter. The piece, titled: The Black People Who Voted for Trump Know He’s Racist, has a subtitle that declares: “Trump’s nonwhite support suggests a gulf between how the “woke” left processes racism and how many people in the real world do.”

McWhorter, from what I have read and heard, seems to be a superb linguist and an intelligent and somewhat unapologetic contrarian. I use the adjective somewhat because when I juxtapose his rhetoric with his coterie of fellow thinkers (Glen Loury, Coleman Hughes, Thomas Chatterton Williams and the pedant Thomas Sowell) McWhorter (and Williams) do not appear to be as intransigent. That said, his latest Atlantic piece reads to me like a puerile egocentric manifesto for high school lunchroom hierarchy.

For the record, I have no quarrel with McWhorter’s political assessment of why an ocean of African American, Latino and “nonracist” white people checked the box next to Trump’s name. Unlike the 2016 election, I feel many esteemed journalists have assessed all the fiscal and retaliatory motives sufficiently—it’s McWhorter’s perspective on racism, and how it’s being “processed,” that’s in dire need of philosophical scrutiny.

McWhorter kicks off his intellectual endeavor with a cinematic analogy that employs two early 20th century films, Jim/Jane Crow movies that he proclaims, “were situated in (a) world (that) was implacably racist.” He goes on to state how; (he doesn’t need the actors who performed in said films to have) “seen me as whole.” “My self-image is unaffected by how they would have felt about me personally.”

After reading this analogy two things instantly leaped off my laptop screen. One: it seems to me, the I and me or self-serving tone that punctuates McWhorter’s assertions, hint at a confined perspective that would have little room for an all-encompassing Gordian knot like racism, (exposing the hidden egoist inside). And two: insinuating that a mature African American demographic, for some disquiet reason, has allowed their “self-image” to be contingent on the way racist white actors (or people) feel about them “personally,” is a crass allegation that contradicts the value-system the “woke” left emphatically upholds.

In reality, the pathetic figure the professor has evoked is more akin to the Uncle Tom/Aunt Jane African American, who I will attest is unfortunately still among us. But most culture critics would agree, those obsequious men and women are more associated with the conservative right—than McWhorter’s alleged Never-Never Land woke left.

What I find interesting about McWhorter’s analogy is his use of a cinematic platform to critique racial politics and intention, a device that is by no means a novel technique. One of James Baldwin’s brilliant essay books The Devil Finds Work is perhaps this country’s most exquisite literary examples. But as high as Baldwin’s insights and explorations soar, McWhorter’s perspective, with its bumble bee-like trajectory, insults and degrades, not only the African American citizens he is referring to, but his own intellectual prowess.

After a screed of examples that explain how Trump and Joseph Robinette Biden Jr. secured their minority support, McWhorter makes the most reasonable and respectable declarations in his essay:

“Progressives may suppose that, now that the country has come so far in recognizing the backwardness of racism, American’s can afford to be more exacting. And racism is indeed a gruesome reality that an enlightened America must get past as much as possible.”

Here McWhorter is eloquently accurate and, referring to minorities in this country as “Americans,” respectfully assertive. Here his latter statement offers a sober analysis—or an opinion worthy of what seems to be a competent analytical mind. However, in the next burst of philosophical thought, McWhorter’s conjecture and insults, like the great musical Show Boat’s description of the Mississippi River, “just keeps rolling along”:

“To psychologically healthy individuals, the fact that Trump wouldn’t want to be their friend may seem an abstraction, as they will never meet him, have fulfilling lives that have nothing to do with him, and are quite sure that they are as good as him anyway.”

Again, to insinuate that intelligent concerned citizens are pining for a political leader, or any racist individual, “to be their friend” is a monstrous and rather juvenile analysis of the intellectual intentions fueling the modern civil rights agenda.

Normally it would be embarrassing for me (or anyone else) to try and speak for the likes of Patrisse Cullors, Alicia Garza and Opal Tometi, but I highly doubt that a statement like “Black Lives Matter” was inspired by the adolescent notion of emotional acceptance. And by the same token, it would take a philistine observer to believe Minneapolis (and other prominent cities in this country) burned for kumbaya reasons. No, the only things African Americans and minorities have been pleading for: is the equality, liberty and justice that this country pledges to all its citizens—a blatant reality that renders McWhorter’s analysis fallacious, and tipping absurdly towards the bizarre side of history.

Speaking of history, its prevalent influence makes one curious about the contrarian banner McWhorter chooses to wave, curious in both the forgone perspective and the one being chronicled as he plucks away at his keyboard. In other words, writers like Minister Malcolm X, Dr. Martin King, Lorraine Hansberry and Ida B Wells would’ve likely been in accord with today’s “woke” community—which makes one wonder how McWhorter reconciles these luminaries (and the many others like them) into his work, perspective and agenda.

Being an unapologetic heterodox myself, I, like most writers, have a lot of admiration for individual thought, but it seems to me thought is most useful when it is checked and balanced with heavy doses of reason, consideration and ethics—which is why, with all due respect, I feel a contrarian like Thomas Sowell, an antiquated number-cruncher, does not possess the nuance it takes to rationally consider the enigma that is racism, and how it is conspicuously, and subtextually, destroying the soul of this nation. However, I find the same does not hold true for McWhorter, a contrarian who seems to be able to, on occasion, ascertain the true nature of reality with an unbiased approach.

History makes it abundantly clear: the world has always had more than its fair share of self-involved egocentric people—and audacious humanitarians, who are consistently ushered into the lore of martyrdom. Fortunately, reasonable thinkers and writers, few that there are, have always been society’s one consistent compensation, the cluster of noncommercial television stations on a superabundant cable channel guide.

James Baldwin once said, “Life is a very short and very long time,” which makes what one chooses to contribute to the world extremely crucial. The racial crisis in this country, already an insidiously spiked bowl of punch, can do without the extra drops of irrational dissension—so one can only hope thinkers like McWhorter will consistently rethink the merits of their ideology. “We the people” (especially the rational ones) can use all the keyboard stalwarts and intelligent orators we can get.

The post What Lurks Beneath the Contrarian Perspective?  appeared first on CounterPunch.org.