Dozens of US-based anti-LGBT groups are fundraising on Amazon’s online donations platform – despite the company’s policies against discrimination based on sexual orientation – a new investigation from openDemocracy reveals today.

Amazon has emerged as one of the few winners during the coronavirus pandemic because lockdown, infection fears and the closure of physical shops have encouraged online shopping. The company has seen profits rise almost 50%, compared to last year.

“Experience feel-good shopping” is the slogan of the AmazonSmile programme, which enables customers to donate to charities as they shop online. Amazon says the programme has facilitated $215 million in such donations since its launch in 2013.

However, openDemocracy research has discovered that more than 40 organisations listed on the US AmazonSmile platform publicly oppose LGBT rights and equality. Among them are groups that have:

In response to openDemocracy’s findings, human rights activists said Amazon should remove these groups from its platform immediately.

“Companies, if they really walk the talk, shouldn’t be giving their platform to organisations that are working to limit the rights of other people,” said Evelyne Paradis, executive director of the LGBT advocacy group ILGA-Europe.

It’s good that Amazon has a diversity of groups on its platform, she said, but “they shouldn’t be giving space to any organisation […] that is actively fuelling hatred and/or working against the rights of other people.”

Amazon has made numerous public pledges to non-discrimination and inclusion of LGBT people. For example, as an employer, it has, for several years, offered benefits to same-sex partners of its employees and covered transgender surgical procedures.

Amazon founder and CEO Jeff Bezos accepted the 2017 National Equality Award from the US LGBT rights advocacy group Human Rights Campaign. In 2012, he and his then wife publicly pledged $2.5m to the fight for same-sex marriage in Washington state.

Two major US Christian right organisations – Alliance Defending Freedom (ADF) and the Family Research Council (FRC) – were previously removed from the AmazonSmile programme amid controversy over their advocacy against equality for LGBT people.

But openDemocracy’s research reveals that these are only the tip of the iceberg and many more organisations with similar anti-LGBT track records remain on AmazonSmile.

A director of one such outfit, Human Life International (HLI), has called on people to “oppose the LGBT movement” and claimed that homosexuality is linked to paedophilia. Earlier this year, openDemocracy revealed how this group has also supported anti-abortion projects in Latin America that have been accused of spreading misinformation and manipulating vulnerable women about their health and rights.

The American Center for Law and Justice (ACLJ), led by Trump’s personal lawyer Jay Sekulow, is also listed on the AmazonSmile platform. It has intervened in numerous US court cases opposing LGBT marriage equality. Its European office also provided legal arguments for banning abortions for Polish women in cases of fatal foetal anomalies.

Another group on the Amazon platform that has been criticised for divisive and anti-LGBT positions is the Billy Graham Evangelistic Association. Its president, Franklin Graham, has called Satan the architect of same-sex marriage and Islam “evil” and “wicked”. This year, several UK venues pulled out of hosting a tour by Graham because of such views.

These three organisations were also among the dozens of US ultra-conservative groups that openDemocracy revealed in October have spent millions around the world – and particularly in Europe – opposing sexual and reproductive rights including in the courts.

“Be part of something bigger” AmazonSmile invites online shoppers. The platform lets customers donate 0.5% of eligible purchases to charities of their choice. It says there are more than one million groups listed on the platform, and that more people have supported animal-related non-profits over any other cause, followed by education-related charities.

It is unclear how much money the anti-LGBT groups have raised from AmazonSmile donations, as this information is not provided by the groups or by Amazon.

AmazonSmile also exists internationally, but with different groups eligible for donations. None of the US anti-LGBT groups are listed on AmazonSmile in the UK, for example.

openDemocracy presented Amazon with a dossier of research into the anti-LGBT activities and statements of more than 40 groups listed on the US platform – and asked if the company would investigate if they had broken their Participation Agreement.

In response, an Amazon spokesperson reiterated its policy: “Charitable organisations must meet the requirements outlined in our participation agreement to be eligible for AmazonSmile. Organistions that engage in, support, encourage, or promote intolerance, hate, terrorism, violence, money laundering, or other illegal activities are not eligible.”

“If at any point an organisation violates this agreement, its eligibility will be revoked,” the spokesperson added, though they did not say whether this will happen in these cases.

They said that “since 2013, Amazon has relied on the US Office of Foreign Assets Control and the Southern Poverty Law Center to provide the data for these determinations.”

The Southern Poverty Law Center (SPLC) produces annual lists of “hate groups”. ADF and the Family Research Council, the two organisations that were previously removed from the US AmazonSmile programme, had been included on these lists as “anti-LGBT hate groups”. Both groups have previously contested these designations.

Of the more than 40 anti-LGBT groups that openDemocracy discovered on the platform, eight have been partners of the controversial World Congress of Families (WCF) network – which is also described by the SPLC as an “anti-LGBT hate group”.

Also on the Amazon platform is an Indiana “state affiliate” of the American Family Association (AFA), which is on the SPLC’s current list of “anti-LGBT hate groups”. The AFA has linked homosexuality with Nazism and called it “a poor and dangerous choice”. It has also previously contested its description as a “hate group.”

Another organisation on the donations platform, Focus on the Family, has been criticised by the SPLC for its anti-LGBT views and described as one of “a dozen groups [that] help drive the religious right’s anti-gay crusade”. 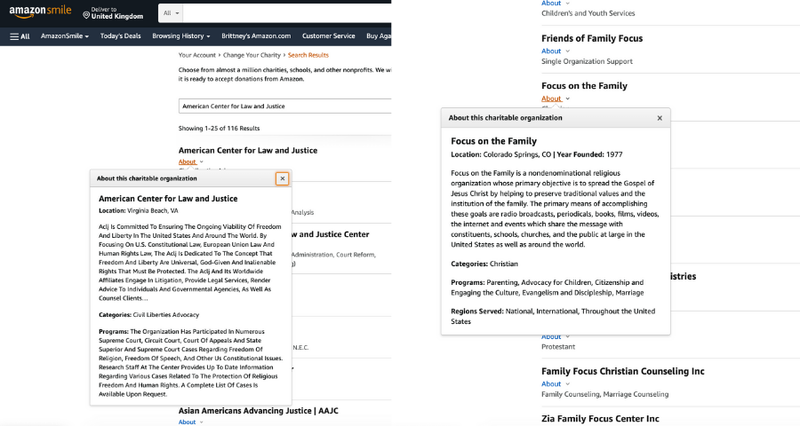 Screenshots of the AmazonSmile platform in December 2020.

Seth Levi, the SPLC’s chief strategy officer, confirmed that Amazon uses the SPLC’s “hate group designations” to identify groups “that do not align with the values and requirements of the Smile program”.

He added: “We are not aware of other sources of information, if any, Amazon uses. We urge Amazon to ensure that none of its platforms, including retail, web services, and entertainment, are used to support and/or promulgate hateful and dehumanising content, as well as disinformation that threatens the fabric of our democracy.”

Stonewall said they have messaged their contacts at Amazon about openDemocracy’s findings. De Santos said: “We have raised our concerns with Amazon and will continue our work until every LGBT+ person is free to be themselves worldwide.”

openDemocracy contacted the American Center for Law and Justice, American Family Association, Focus on the Family and Human Life International for comment on their compliance with AmazonSmile’s Participation Agreement. None of these groups replied.

A spokesperson for the Billy Graham Evangelistic Association said the group is “grateful to participate in the Amazon Smile program” and that it “does not engage in unlawful discrimination and we do not promote intolerance.” They added: “We hope Amazon Smile will continue to respect the rights and dignity of all people, and won’t discriminate against faith-based groups based solely on their sincerely held religious beliefs.”