Our year has been eclipsed by the pandemic, the rush of a virus paralysing societies across the world. Some governments offered smarter, more scientific, and humane approaches to the pandemic; many (but not all) of these have been governments with a socialist orientation. Amongst them is the Indian state of Kerala, tucked into the country’s south-west with a population of 35 million and governed by the Left Democratic Front (LDF). Kerala’s Health Minister KK Shailaja was later celebrated as the ‘Coronavirus Slayer’ for her leadership within a government that puts the needs of the population ahead of profit and superstition.

It is not as if there have been no cases of COVID-19 in Kerala, nor that there have been no deaths; it is rather that the government operated in a measured, swift, and deliberate way to inform the public, to use the government machinery to test the population for COVID-19, to carry out contact tracing, to isolate and treat the infected, and to take all possible measures to flatten the curve. Furthermore, as a result of a long history of organised public action in the state – often led by the communists and social reformers – trade unions, cooperatives, student and youth organisations, women’s organisations, and others operated in a very disciplined way to provide information and relief to the public.

In early December, Kerala held local body elections across the state. The communists won more seats in these elections than all the seats won by the opposition. The right-wing Bharatiya Janata Party (BJP), which runs the Indian government in Delhi under the leadership of Prime Minister Narendra Modi, and the centre-right Indian National Congress, which is the main opposition in Kerala, ran a vicious campaign against the Left, including harsh personal attacks directed at Kerala’s Chief Minister Pinarayi Vijayan. The media – controlled almost exclusively by the major private corporations – led the attack on the Left and ignored new initiatives pushed by the Left in this remarkably difficult period.

For instance, the corporate media ignored the inauguration of thirty-four new public schools for the ‘Centre of Excellence’ project, which resulted in the slow return of children from expensive private schools to the revamped state schools. If they did report the initiatives, such as the building of about 250,000 homes for the working class and the indigent through the ‘Life Mission’, the media focused on mischievous allegations that charity money from the United Arab Emirates had violated foreign exchange regulations. These unfounded attacks shaped the harsh context of these local body elections. 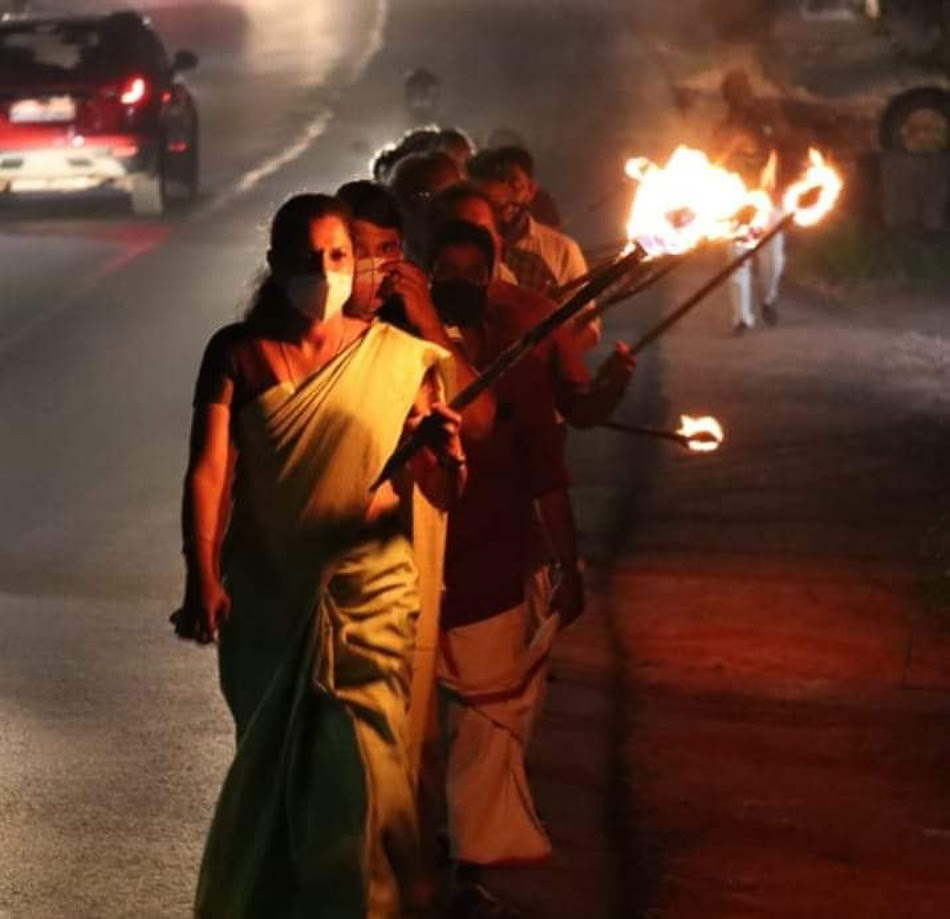 PP Divya leads a protest in solidarity with Indian farmers.

Kerala’s Left went into this election with a series of important advantages. First, over the course of a century of struggle and governance, the communist movement has driven an agenda to improve the living conditions of the people, including by promoting health, education, and housing, and has inculcated a tradition of public action. Second, it was the Left that initiated a people’s planning campaign twenty-five years ago; this process enlivened the local self-government bodies and made them crucial platforms for public action and for the development of the Left alternative. Third, the current Left Democratic Front government has an exemplary record of managing crises that predates the pandemic, such as the catastrophic floods and the outbreak of the Nipah virus, both of which struck the state in 2018. Fourth, the Left’s mass organisations in the state are alert to the needs of the people and are often found working to provide relief, to fight against social indignity, and to fight to expand the rights of people. This was most clearly visible during the pandemic, when student, youth, women’s, workers, and peasant organisations delivered food and medicine to the people, built public washing facilities, and assisted local governments with testing, tracing, and enforcing the quarantine. It was this mass work that provided the best antidote to the virulence of the corporate media.

It was out of this remarkable mass work that the Left chose its candidates for the local body elections, most of them very young and a large number of them young women leaders from across the state. Below are short impressions of five of these new elected officials. 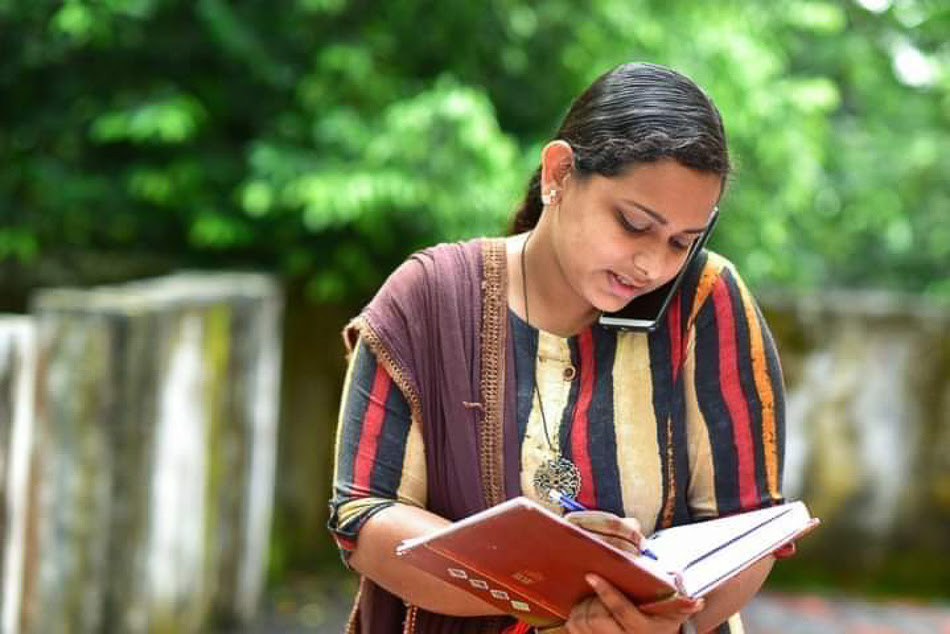 Reshma Mariam Roy won her seat from the Aruvappulam grama panchayat (local self-government at the village level), which had been represented by the Congress for the past fifteen years. Reshma turned twenty-one, the minimum age to contest these polls, the day before she filed her nomination. She is a member of the Students’ Federation of India (SFI) and of the Democratic Youth Federation of India (DYFI), both mass organisations of the Communist Party of India (Marxist), and a leader in her college union. During the pandemic, Reshma had worked for the ‘helping hand’ programme started by KU Jineesh Kumar, another Left youth leader and the local representative to the state legislature; through the programme, they aid anyone who required it during the lockdown. During her campaign, Reshma kept a diary, in which she noted down the frustrations and demands of the people. She was happy that the Left gave young people the opportunity to run in these elections. ‘If people have a good opinion of me after five years’, she said, ‘that is the real victory’. 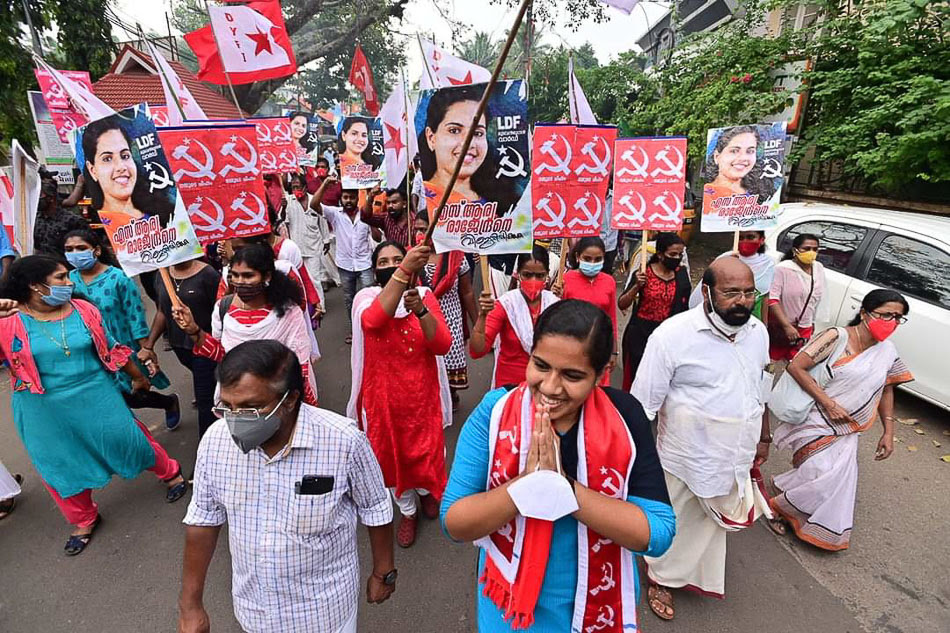 Arya Rajendran marches during the campaign

Arya Rajendran, twenty-one years old, is the president of Balasangham, an organisation of a million children that works to promote scientific and secular values in children that was set up on 28 December 1938 in Kalliasseri, Kannur (Kerala); its first president was the young communist (and later chief minister of Kerala for eleven years) E.K. Nayanar. Arya, a member of the SFI, sat for her final college exams at the same time as she campaigned for her seat on the Thiruvananthapuram city council. ‘Local bodies are the nerves of the democratic process of Kerala’, she said. ‘It is important that we have young people committed to the cause of democracy being elected to office. It is through local office that we can make sure that everyone benefits from the Left alternative being developed in the state’. 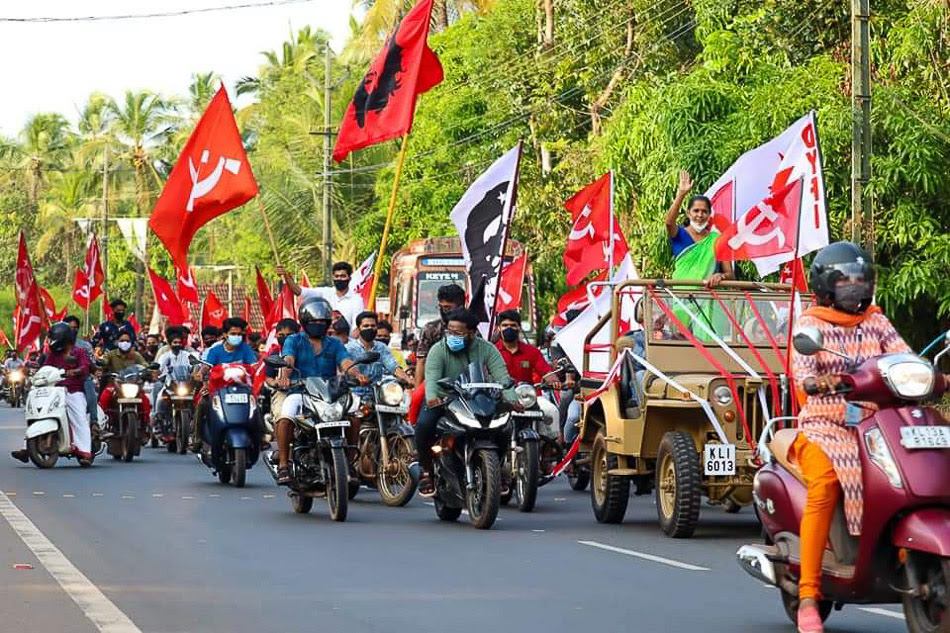 PP Divya, at thirty-six-year-old, is already a veteran in the communist movement. She is a leader in the DYFI and the All-India Democratic Women’s Association (AIDWA) and is a district committee member of the Communist Party of India (Marxist). She had already been a member of the district panchayat (council) since 2015, but now she has been re-elected and is expected to become the president of the district council. Not only has Divya been a key person in the fight against COVID-19 in her district, but she has led from the front to make basic improvements in daily life there and has led protests in solidarity with the farmers’ revolt that has gripped India. 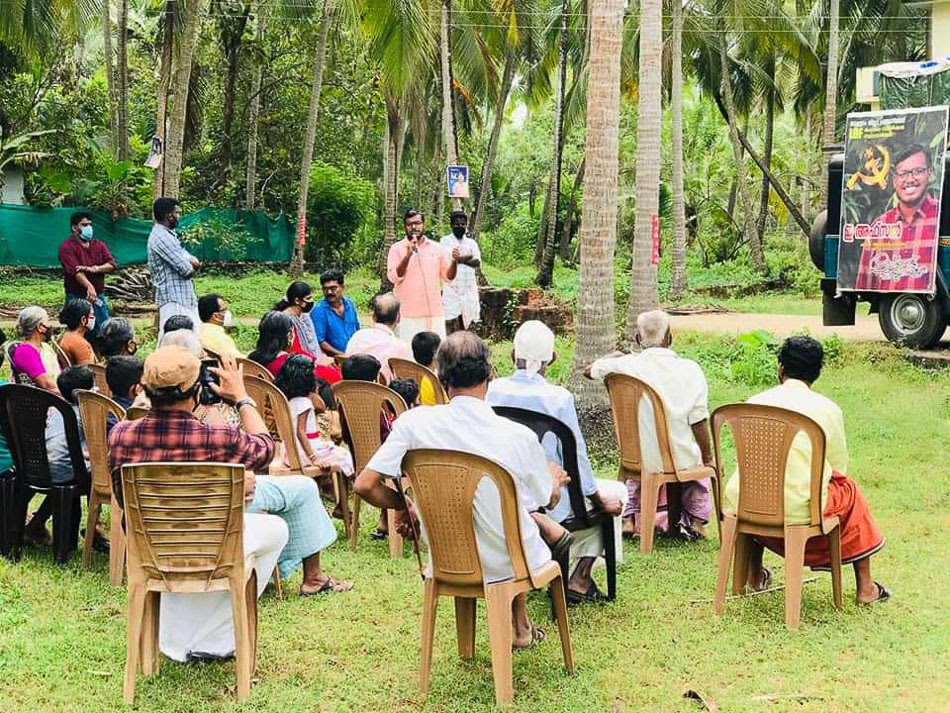 E. Afsal, like Reshma and Arya, is a leader of the SFI. At age twenty-five, he won from the Mangalam ward of the Malappuram district council. Afsal, Reshma, and Arya walk in the footprints of KV Sudheesh, who was a student leader and an elected office holder of the Kannur district council. On 26 January 1994, Sudheesh was stabbed to death by members of the fascist RSS, which is connected to India’s ruling BJP. 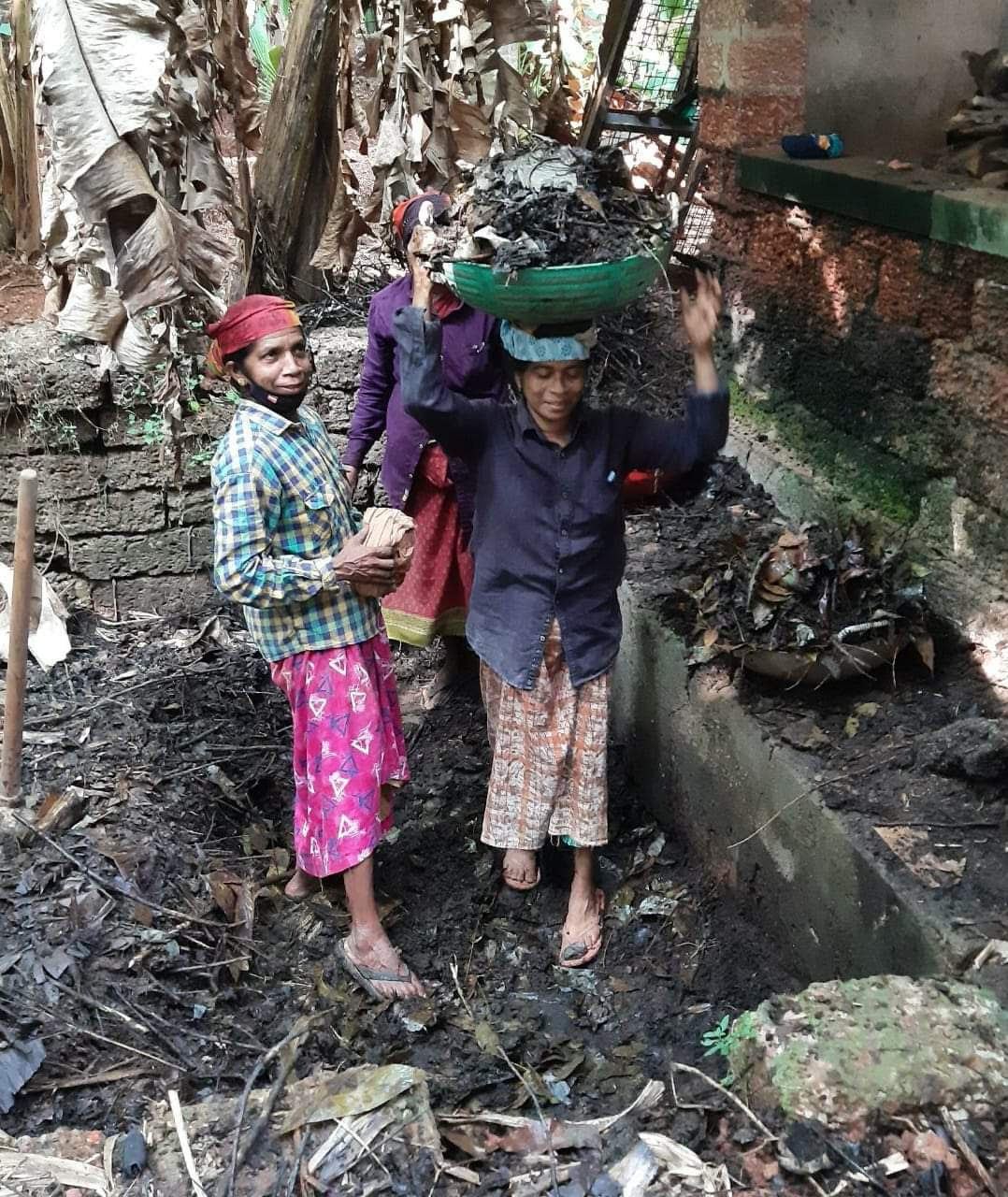 P. Prameela, who won a landslide at Pilicode, returns to work the next day

Comrade Prameela, who works as an agricultural wage labour, was one of the 58% of women who won seats in this local body election. Prameela is a member of the Communist Party of India (Marxist), one of the directors of the board of the Kodakkad service co-operative bank, and a leader of AIDWA. She won more than 90% of the votes to take a seat on the Pilicode panchayat. 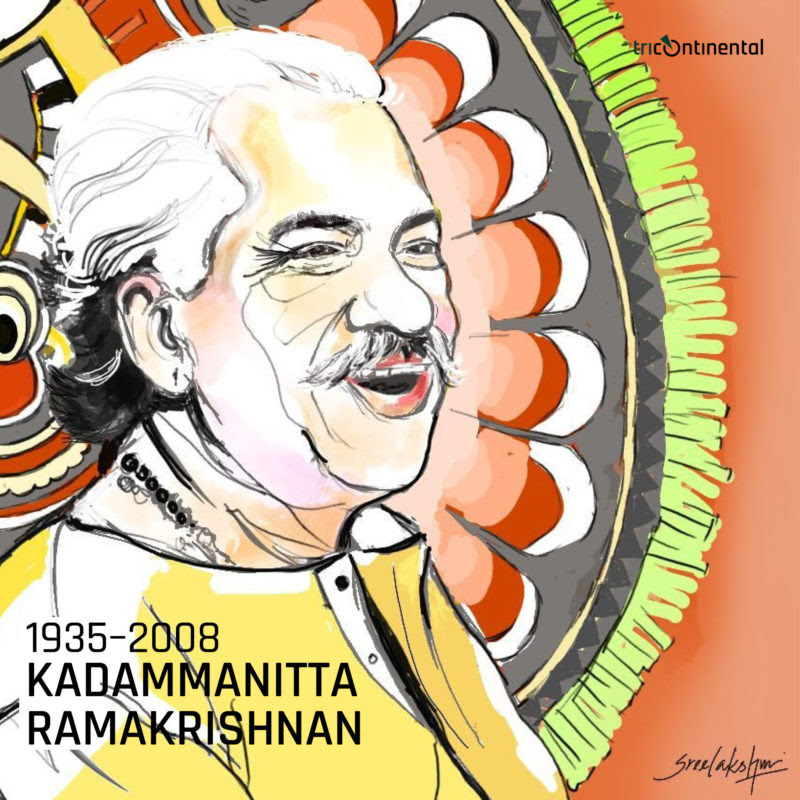 In 1976, the communist poet Kadammanitta Ramakrishnan wrote Kannurkkotta, or ‘Kannur Fort’, a poem that reflected his hope that the old can fade away and the youth can bring forth a new world. Ramakrishnan was president of the Purogamana Kala Sahitya Sangham (the progressive writers’ association) and an elected member of the state assembly (his candidacy supported by the Left).

All the fortresses will become antiques.
All the cannons will silently rust.
All the sultans will run away into the dark caves.
My children, who are not sleep deprived,
Will witness curiously all these events.

They will witness these curiously because they will not be fixated on the past. With names like Reshma, Arya, Divya, and Afsal, they will set aside the cannons and the sultans to construct a democratic world. And we will be walking right beside them. 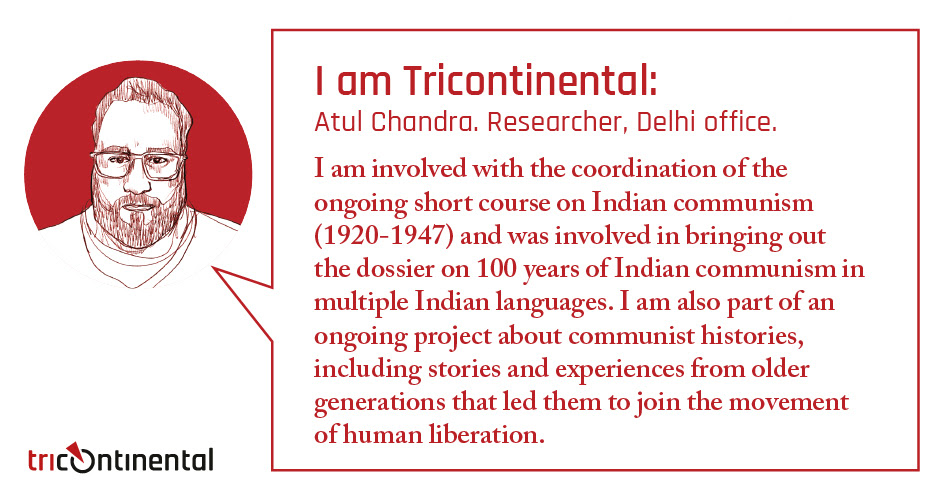