Investigators at the scene where Pastor Yeremia Zanambani was alleged to have been shot dead by the Indonesian military near Hitadiap village. Image: CNN Indonesia screenshot

The family of Pastor Yeremia Zanambani, who was shot dead in Hitadipa district, Intan Jaya regency, Papua, three months ago are asking that the case be tried in a human rights court.

They oppose having the trial being taken to a military tribunal, reports CNN Indonesia.

“They [Yeremia’s family] want the case to be heard in a human rights court, so that the perpetrator can be tried in accordance with his actions and there will be justice for the victim. The victim’s family has no faith in the legal process of a military tribunal,” said a member of the team of lawyers representing Zanambani’s family, Yohanis Mambrasar.

In early October the government formed the Intan Jaya Joint Fact Finding Team (TGPF) to investigate the killing of Pastor Zanambani on September 19.

The team found allegations of the involvement of security personnel in the murder of the religious figure.

In a press release on Wednesday, the commander of the Army’s Military Police Centre, Lieutenant General Dodik Widjanarko, said that the Army Headquarters Legal Process Reinforcement Team was in the process of attempting to question 21 personnel from the 400 Raider Military Battalion in relation to the shooting.

Legal handling deplored
Mambrasar said that he deplored the legal handling of the case which should already be at a more advanced stage in the investigation.

“Like arresting and declaring suspects, because there’s already enough evidence. There are many witnesses and the indicating evidence is already very strong [and enough] to explain the case and the perpetrator,” he said.

He also said other such cases which had occurred in Papua recently, such as the murder of two youths named Luter Zanambani and Apinus Zanambani on April 21, the torching of a healthcare office on September 19 and the shooting of Agus Duwitau on October 7 must also be resolved by a human rights court. 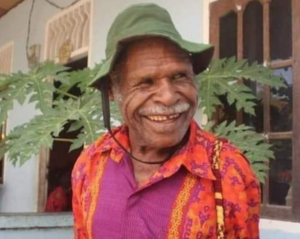 Rev Yeremia Zanambani … alleged to have been shot dead by the Indonesian military in Hitadiap village on September 19. Image: Suara Papua

Mambrasar said that as regulated under Article 9 in conjunction with Article 7(b) of Law Number 26/2000 on a Human Rights Court, the elements of a gross human rights violation in these cases — including Zanambani’s shooting — had already been met.

“As referred to under Article 7, namely that there were acts of violent killing which took in a systematic and broad manner”, he said.

IndoLeft News reports:
Although the government sanctioned TGPF only said that it found indications of the involvement of security personnel in Zanambani’s murder, an investigation by the government’s own National Human Rights Commission (Komnas HAM) explicitly alleged Zanambani’s murderer as being Hitadipa sub-district military commander Chief Sergeant Alpius Hasim Madi.

Komnas HAM said Zanambani was killed while being interrogated on the whereabouts of an Indonesian military assault rifle two days earlier during an exchange of fire with the West Papua National Liberation Army (TPNPB).