Clare Grady is going to prison. On February 10, this nice Irish Catholic lady of 62, who lives with her family in Ithaca, New York will enter Alderson Prison, West Virginia, to begin a one-year-and-one-day sentence. That’s because, on April 4, 2018, Clare and six cohorts, also white and Catholic, broke into the world’s largest nuclear submarine base at Kings Bay, Georgia and defaced government property to call attention to the increasing danger of nuclear war.

Because the group – Plowshares 7 – believes that nuclear weapons aren’t created in isolation from a system that also creates climate change, murders people like George Floyd, and brutally detains immigrants, the group read out a statement, repenting of the sin of white supremacy. They condemned “racism, militarism, and extreme materialism,” the triple evils of the U.S. profit imperative once called out by Martin Luther King.

Unsurprisingly, Clare and her comrades were arrested, charged with federal crimes, and convicted on all counts. By now, all but one have been sentenced to terms similar in length to Clare’s, which, compared to those served by most people convicted of felonies, seem almost tiny.

As a journalist, I recently interviewed Clare about her case. Since then, Clare and I have been emailing, Zooming, talking about people we know in common, her kids, the puppets she’s making for some peace project. She is becoming my friend. So what you’re reading isn’t anything like a balanced, unbiased hunk of journalism. I am an unprofessional.

See, over the past decades, I’ve come to know many people imprisoned for unlawful acts, protesting some or all of Dr. King’s “evil triplets.” I know that people in prison suffer physically, psychologically. Sometimes they die.

And now, the COVID-19 pandemic has invaded the crowded, unsanitary cages where people – “political” or not – are afforded little or no protection. Reportedly, COVID-19 infections are 5.5 times – and counting – higher in U.S. prisons than out. Seeing Clare Grady and her friends incarcerated would have been hard without COVID. It’s way harder now. They’re in their sixties, seventies; many battling underlying health concerns.

To try and help them, I’ve thought about reporting on the scourge of COVID-19 behind bars: the high infection rates inside; the vulnerability of elders; how hardly anyone gets out. But knowing Clare has helped me remember, from deep in the 20th century folds of my brain, something even worse than this pandemic. I remember what nuclear weapons can do.

In 1945, as everybody knows, the U.S. dropped atom bombs on two Japanese cities, killing hundreds of thousands of people, poisoning the ecosystem, and beginning a global arms race that brought us weapons of increasing devastation, capable of obliterating planetary life many times over. Like billions, I grew up in a world where “mutually assured destruction” was the only way to “peace.” 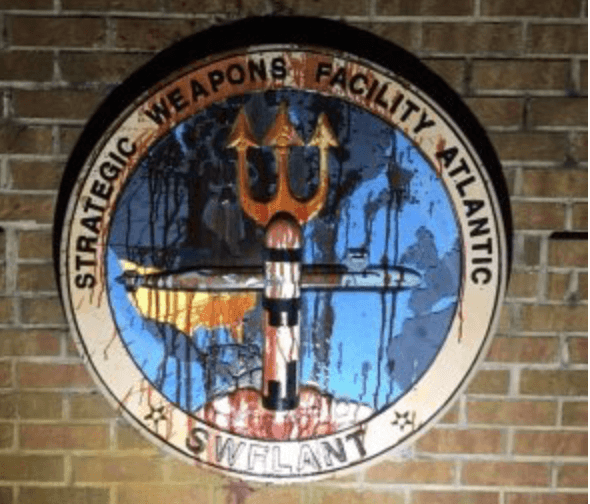 Fortunately, there was pushback. Some people wrote books like E.P. Thompson’s Protest and Survive. Others actually protested. People around the world decried not just nuclear war but also nuclear power, after accidents like Three Mile Island and Chernobyl. Plowshares, begun in 1980, was only one group among hundreds working to abolish nuclear power and weapons. People like Clare and her gang were there on June 12, 1982, when around a million antinuke protestors took over Midtown and Central Park in New York City.

For a minute, back in the last century, protesting nuclear war was cool. Women in particular played a huge part; in the 1980’s, women’s peace camps sprang up in places like Greenham Common in the UK and Seneca Falls, NY. I was part of a Midwestern lesbian community where, along with supporting battered women’s shelters and marching against police brutality, just about everybody worked somehow against nuclear weapons and power. We got pretty good at describing what a nuclear winter would be for those unlucky enough to survive an initial blast: blackened sky for years; burning asphalt; deaths from radiation… We ingested that nightmare.

But it turns out you can’t live more than a few years contemplating nuclear apocalypse and ragging on the military industrial complex if you want a “normal” life. In Nicaragua, the Sandinistas needed help; then the HIV/AIDS crisis hit. So, forgetting that the arms industry never sleeps, most of us migrated to other causes. Like America, we made peace with our end-of-the-world nightmare through fun, post-apocalyptic and dystopian scenarios, from Godzilla to The Hunger Games.

Years ago, it was relatively simple to identify governments as the source of nuclear buildup. Then corporations began devouring every facet of production, handling, storage. As the nuclear industry threaded its way through the products and services of our lives, it became harder to see, dismantle, and to protest. Gradually, much of the antinuke movement shuttered.

Plowshares didn’t. Clare’s April 2018 protest was maybe the 80th Plowshares action. Yet, how could it possibly change today’s world, which holds around 14,000 nuclear bombs, most of which are vastly more destructive than those that hit Japan, and can be launched (by design or accident) instantly?

There’s also the fact that Trump has pissed on nuclear pacts like the Open Skies Treaty, the Intermediate-Range Nuclear Forces Treaty, and the Iran Nuclear Deal. A few days after Joe Biden takes office, the Strategic Arms Reduction Treaty with Russia will expire. Will Biden move to extend it? Maybe. But let’s remember that he voted for the 2003 Iraq invasion, and seems, according to In These Times, to be stocking his administration with a “host of pro-war individuals.”

What Joe Biden will never admit is that the world doesn’t have to work this way. In fact, it was Clare, not Joe, who told me that there’s a new Treaty on the Prohibition of Nuclear Weapons [TPNW] going into effect January 22. International law will soon make nuclear weapons illegal.

Of course, Joe doesn’t care; NATO and the U.S. oppose the treaty. Clare will go to prison and the mainstream press won’t peep. All TPNW offers is small hope for a big miracle. But still, it’s hope.

Basically: if you’ve been fighting those bad triplets, please don’t stop. But the whole point of that seemingly pointless Plowshares action is to wake us up to the fact that all life forms – regardless of politics – are desperately, deeply, drastically interdependent. “Intersectional,” in movement terms. And if some “right-wingers” deny COVID, most of us – left, right, center – perpetually deny the likelihood of nuclear disaster.

So let Clare Grady do her work. And if my friend goes to prison, if she gets sick there, then sicker … my heart will break. It may not recover. But here’s the thing.

It won’t break for nothing.

Colville to be sentenced February 2021:

One in 5 people in prison have COVID:

Women’s Encampment for a Future of Peace and Justice:

Trump pulling out of INF: