Should you be worried about the new COVID strains originating in the UK, South Africa, and elsewhere, and recently identified in the US?

The authorities claim there’s no cause for alarm. They’re focusing on concerns about vaccine effectiveness, saying the vaccine will be highly successfully against the new strain.

They’re mostly right. While some legitimate concerns have been raised about the vaccines potentially being 10-20% less effective against the new strains, this small difference shouldn’t make you too worried.

However, another aspect of these new strains should make you very worried indeed: they’re much more infectious. Unfortunately, the implications of their infectiousness has received little news coverage, which is cause for serious alarm.

Such complacency reflects our sleepwalking in the pandemic’s early stages, despite many warnings from myself and other risk management experts, leading us to fail to prepare successfully for this situation. We’re about to make the same mistake with seriously tragic consequences.

Research shows that the UK strain is anywhere from 56% to 70% more infectious, meaning each individual person who gets the new strain infects 56-70% more people than the older COVID strain. The new variant quickly came to dominate the old strain of COVID in Southeast England, going from less than 1% of all tested samples at the start of November to over two-thirds by mid-December.

The South African strain appears even more infectious than the new UK strain. It came to dominate the country quickly: first found in October, it was responsible for over 80% of all new COVID cases by the end of December. 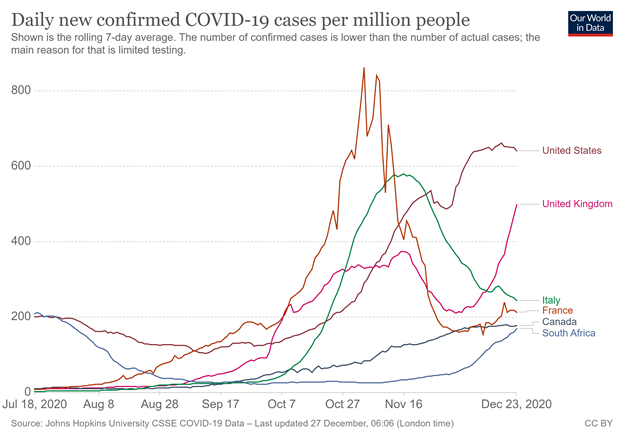 The UK, US, Canada, Italy, and France all experienced a major rise in cases in September and October. That’s mainly because colder weather in the Northern Hemisphere drove people to interact indoors, where COVID spreads much more easily.

All these countries imposed various levels of lockdown in late October and early November. That decreased or stabilized their numbers by late November and early December, with the exception of a Thanksgiving-induced bump in the US that stabilized by mid-December.

The UK’s numbers, however, look different. After going from under 250 new cases per day in the start of October, it went to nearly 400 by mid-November. By early December, it successfully bent the curve, with new cases dipping below 250 again. However – unlike any of the other countries – it then experienced a sharp uptick from 250 in early December to over 500 by the end of December. Given the UK didn’t experience any holiday bumps or changes in government policy, the new strain offers a very convincing culprit for this deadly surge.

By contrast, South Africa is in the Southern Hemisphere, and it’s summer there from December to February. So COVID cases should decrease, not increase. However, South Africa experienced a major surge, from below 30 cases per day in early November to over 180 by the end of December. Given no policy changes or other viable explanations, the new COVID variant is almost certainly to blame.

Why We Ignore Slow-Moving Train Wrecks

Our minds aren’t well adapted to processing the implications of these seemingly-abstract numbers. We fall into dangerous judgment errors that scholars in cognitive neuroscience, psychology, and behavioral economics like myself call cognitive biases.

We suffer from the tendency to focus on the short term, and minimize the importance of longer-term outcomes. Known as hyperbolic discounting, this cognitive bias causes us to underestimate the eventual impacts of clear trends, such as a more infectious strain of COVID.

The normalcy bias results in us feeling that things will generally keep going as they have been — normally. As a result, we underestimate drastically both the likelihood of a serious disruption occurring and the impact of one if it does occur, such as a novel variant.

When we develop plans, we feel that the future will follow our plan. That mental blindspot, the planning fallacy, threatens our ability to prepare effectively for and pivot quickly when facing risks and problems, such as the new strains.

The Implications of Much Higher Infectiousness

The new strains likely arrived here by mid-November, with hundreds of probable cases by now. Based on the timeline in the UK and South Africa, the new variants will become predominant here by March or April.

The US has maintained a daily new case count of just over 200,000 from December 10 to December 24. Imagine what happens when this starts shooting up rapidly as the new strains start to overtake the old strains, eventually doubling every two weeks when the new variants become predominant.

Hospital systems in California, Texas, and other states are already overwhelmed. The terrible March outbreak in New York City will seem like a summer shower compared to the upcoming tsunami that will flood our medical systems. Moreover, the surge will undoubtedly cause major supply shortages and hammer industries such as travel and hospitality.

Might vaccines help? Not until the summer, due to the timing of the rollout.

What about government lockdowns? Not likely. The extreme politicization, widespread protests, and severe economic pain from lockdowns make politicians very reluctant to impose the kind of severe lockdown necessary to fight the new strains. Even if some do, mass public noncompliance will make lockdowns ineffective.

What Can You Do?

For yourself as a private citizen and your household, change your plans:

If you’re a leader, prepare your team:

We’re in for a world of pain this Spring and early Summer. It may feel unreal, but that’s simply our cognitive biases telling us that, just like they did early in the pandemic. Don’t be caught off guard, again, by ignoring this warning.