The rigged system that protects transnational “investments” spread like a virus globally in 2020. This is a lucrative field that runs parallel to international law, propelled by the proliferation of some 3,000 international investment treaties and trade agreements that give corporations the right to sue governments for hundreds of millions, or even billions of dollars over public policies and regulations that they claim reduce the value of their foreign investments or their expected profits.

It’s well beyond time to put health and safety over corporate profits.

President-elect Joe Biden was critical of this system on the campaign trail, stating “I don’t believe that corporations should get special tribunals that are not available to other organizations.”

Now that he has just selected his top trade official, Congressional committee trade lawyer Katherine Tai, he should direct her to work with other nations to swiftly protect governments from the surging number of investor-state cases and to start dismantling this rigged system.

In 2020, the World Bank´s International Center for the Settlement of Investment Disputes (ICSID) registered at least 51 new known ISDS cases. In several cases, the demands are truly staggering. A U.S. telecom company is suing Mexico under NAFTA for $2 billion. An infamous Brazilian construction company is suing Peru for more than $ 1.2 billion (using a Luxembourg-Peru bilateral investment treaty). A Dutch port company is suing Georgia for $1 billion. And an Italian construction company filed a suit against Panama for $2.2 billion. (See full list of 2020 cases in table below)

George Kahale III, an arbitration lawyer and chairman of Curtis, Mallet-Prevost, Colt & Mosle LLP, refers to ISDS a “deeply flawed system,” and as the “Wild, Wild West of international law and practice.” He explains that “what we are increasingly seeing in ISDS is not only bad decisions on basic issues of jurisdiction and liability, but also astronomical damage claims. We are truly in the age of the megacase, where billion-dollar clams have become commonplace. These claims tend to be grossly exaggerated, and at times seem to be manufactured out of thin air, but that doesn’t mean that they will not be taken seriously by an arbitral tribunal.”

Developing countries are at far greater risk from ISDS. They tend to be the host rather than the home country for transnational corporations, and they are more politically vulnerable. In 2020, the same pattern followed. Corporations headquartered in Western Europe filed 25 cases in 2020 but the governments of that region were hit with only five investor lawsuits. U.S. and Canadian companies filed nine lawsuits while their home governments did not face any investor claims. 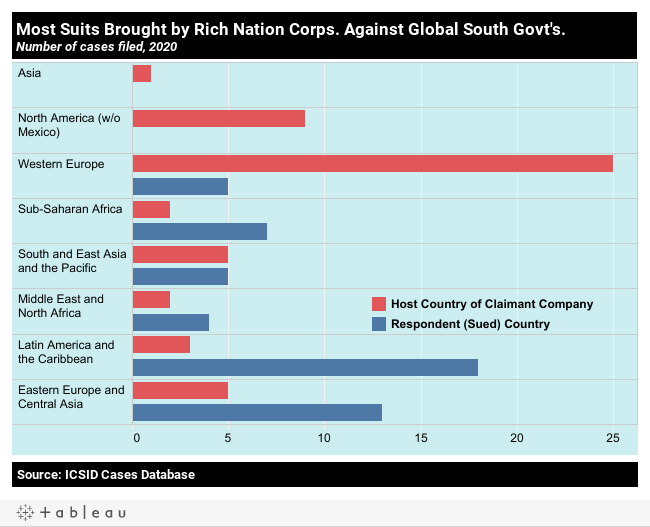 The regions that are the targets of the most suits in 2020 are Latin America and the Caribbean, with 18, and Eastern Europe and Central Asia, with 13, following a pattern of the latest decades. 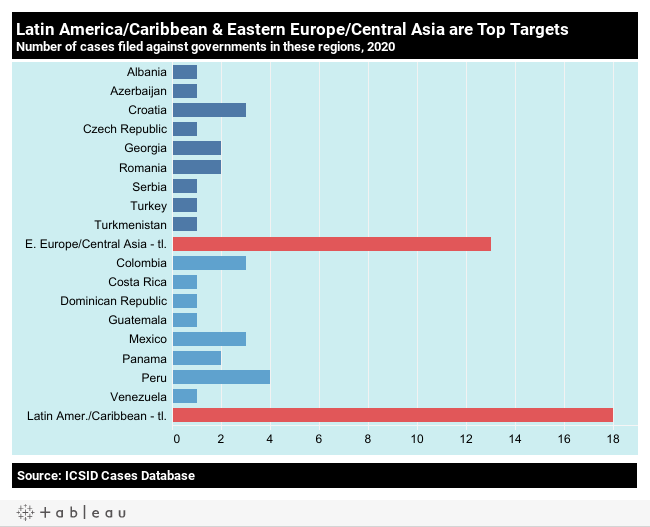 In addition to new cases, 2020 also saw the actual enforcement of awards from previous years. Hurricane-battered Guatemala, for example, had to pay $37.4 million to a subsidiary of U.S.-based Teco Energy. Pakistan is trying to annul an award in favor of an Australian mining company for $6 billion, arguing that it would batter its economy and hinder its ability to mitigate the coronavirus pandemic.

And it is precisely in the midst of the Covid-19 pandemic that law firms have been salivating over the potential to profit from such claims. For example, Aceris Law, an international arbitration firm based in Washington, D.C., has stated that “While the future remains uncertain the response to the Covid-19 pandemic is likely to violate various protections provided in bilateral investment treaties (BITs) and may bring rise to claims in the future by foreign investors.”

In Peru, there have been fears  that private foreign companies which operate toll booths could file claims in response to the government’s decision to suspend tolls as crowds fled cities in fear of the virus. In Mexico, which is trying to control its power supply during the outbreak, the government is being threatened with arbitration by businesses in the European Union and Canada that want access to its energy markets.

This is why 630 civil society groups, including the International Trade Union Confederation, have sounded the alarm, urging governments to “take a lead in ensuring countries around the world do not face a wave of investor-state dispute settlement (ISDS) cases arising from actions taken to tackle the Covid-19 pandemic and ensuing economic crisis.”

Among the cases that could arise are those from government actions such as restricting and closing business activities to limit the spread of the virus and protect workers or ensuring medicines, tests, and vaccines are affordable, among many others. This letter also calls for suspending all ISDS cases on any issue against any government while it is fighting Covid-19 crises. Government capacity needs to be focused on the pandemic response and ensuring that no public money is spent paying corporations for ISDS awards during the pandemic.

Developing countries in the crosshairs of extractive industries

The gravity of corporations using ISDS to undermine legitimate public interest policies and regulations certainly did not begin with the pandemic. According to the United Nations Conference on Trade and Development, or UNCTAD, foreign investors have filed up to 1,064 treaty-based cases. And this figure does not include other ISDS cases based on contracts. Because of lack of transparency, no one knows exactly how much governments have had to pay out already.

As in previous years, companies of the extractive industries (Oil, gas, and mining) have used the ISDS system the most. 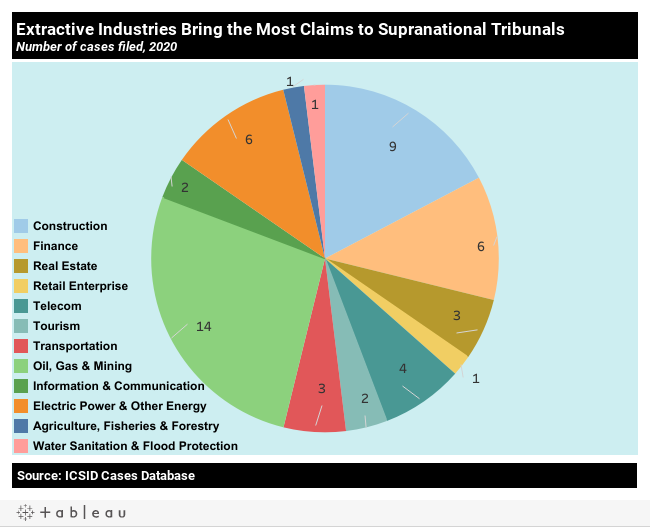 At the Institute for Policy Studies, we’ve used the partial information that is publicly available to calculate that governments have been ordered to pay at least $72.4 billion to foreign investors in known cases related to disputes over oil, gas, and mining projects. Governments are currently being sued for another $75 billion in 73 known pending oil, gas and mining cases, only five of which target rich country governments.

When policymakers around the world are scrambling for resources to confront the Covid-19 pandemic, they should not have to worry about fending off expensive corporate lawsuits. The Biden administration should work with other governments to suspend the use of ISDS during the pandemic as a step towards permanently ending this undemocratic system.

It’s well beyond time to put health and safety over corporate profits.