Great power competition in the Asia-Pacific region has been building for years. But covid-19 has turbo-charged the shifts taking place and China has finished 2020 in a significantly stronger position compared with the US than when the year started.

Meanwhile, Canberra’s relations with Beijing continue to deteriorate and there’s little reason to be optimistic that a sudden, positive turnaround will be seen in 2021.

As competition rather than cooperation has become the dominant frame through which both Beijing and Washington view their bilateral relationship, each is increasingly sensitive to evidence that other countries in the Asia-Pacific region are supporting their opponent.

The fundamental driver of China’s hostility towards Australia in 2020 stems from its assessment that Australia’s leaders have reneged on earlier commitments to never direct the country’s security alliance with the US against China.

Prime Minister Scott Morrison has appealed for Australia and other middle and smaller powers to be granted “greater latitude” in how they manoeuvre between the US and China in the future.

But the University of Sydney’s James Curran cautions against unrealistic expectations:

Great powers simply don’t dole out strategic space to others.

The fallout from covid-19 has accelerated the trend in China’s favour. The International Monetary Fund’s latest growth forecasts suggest China’s economy will jump from two-thirds to three-quarters the size of the US by the end of 2021.

And when cost differences are accounted for and the two economies are measured in terms of their respective purchasing power, China’s GDP is actually already 10 percent larger than the US.

Retail sales grew by 5 percent in China in November, compared to the same month last year, as the country’s economy continues its strong recovery. Image: The Conversation/Yang Jianzheng/AP

According to the Lowy Institute’s “Asia Power Index”, which tracks power in the economic, military, diplomatic and cultural domains, the US still comes out on top, but its lead over China has been cut in half since 2018. This mainly reflected losses by the US rather than gains by China.

And even before covid-19 hit, a survey of business, media and civil society leaders in Southeast Asia showed that Beijing was considered vastly more influential than Washington in the region, though this increasing power was viewed with apprehension.

Nearly half said they had little to no confidence in the US as a strategic partner or provider of regional security.

And when asked if the Association of South East Asian Nations (ASEAN) was forced to align itself with either the US or China, a majority in seven of the 10 ASEAN member countries chose China.

@NAR : Interesting survey by @ISEAS. #Vietnam shows most positive perception towards US against China. Meanwhile, 7 among 10 ASEAN countries are in favour of China. pic.twitter.com/8VrO1UOqoL

The past year has also delivered dividends for China’s leaders domestically, with most citizens giving them high marks for their handling of the public health crisis, despite some initial anger over the government’s early attempts to cover up the severity of the pandemic.

This reinforces already high levels of overall trust in the central government.

The contrast with the US in this regard is stark. In May, a cross-country survey revealed that 95 percent of Chinese respondents had trust in their government, compared with just 48 percent in the US.

Yet, China’s leaders still seem insecure
All of these “wins” would naturally provide impetus for China’s international behaviour to become more confident and assertive.

But President Xi Jinping’s worldview is another factor. In September, Xi exhorted Communist Party cadres to “maintain a fighting spirit and strengthen their ability to struggle”. The word “struggle” appeared more than another 50 times in the same speech.

existential struggle against an implacable enemy dead-set on destroying China.

China’s diplomats had already been primed to embrace a “fighting spirit” in a speech delivered by Foreign Minister Wang Yi last November.

All of this has meant that rather than projecting a self-assured poise, China’s international behaviour has frequently veered in the direction of bullying fuelled by insecurity.

Australia has been on the front lines of this treatment — dialogue on the leader and ministerial level has been refused, exports have been targeted and propaganda campaigns have been deployed.

Beijing’s intransigence has predictably led to the strengthening of coalitions like the Quadrilateral Security Dialogue (comprised of the US, Australia, Japan and India), as well as deeper conversations among Japan, India and Australia about how to build greater resilience into supply chains that are currently heavily exposed to China. 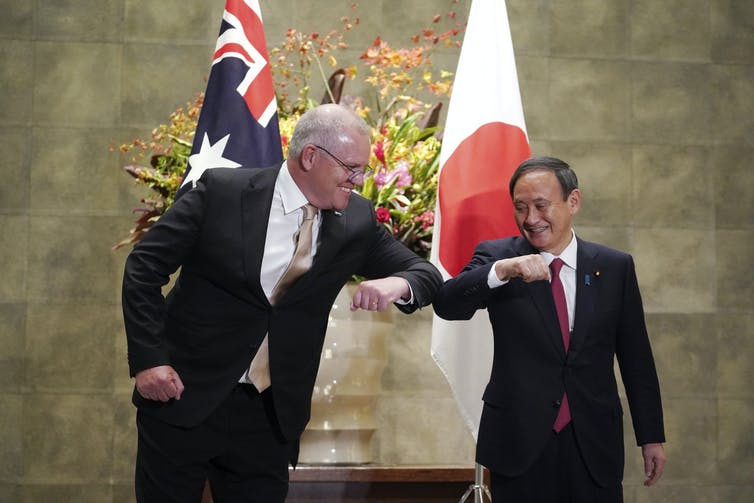 China warned Australia and Japan will ‘pay a corresponding price” if a new defence pact signed between the countries threatens its security. Image: The Conversation/Eugene Hoshiko/AP

Its “vaccine diplomacy” in Southeast Asia is a case in point.

China is touting this effort a “Health Silk Road”, with pledges to provide billions in aid and loans to mostly developing countries to help them recover from the pandemic. 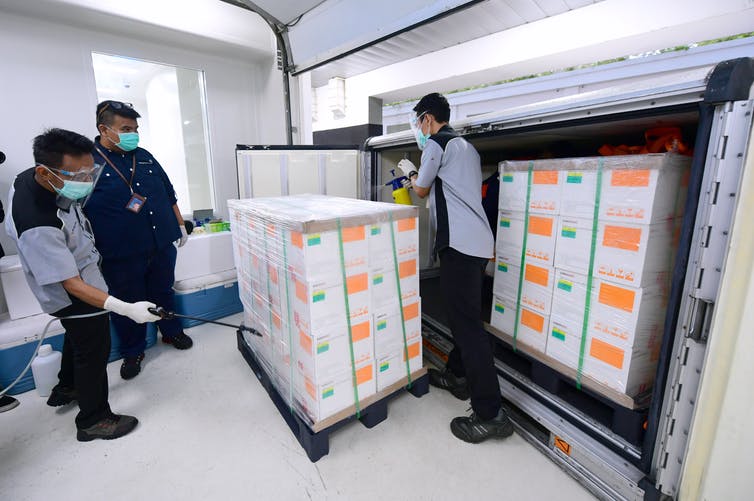 Boxes containing coronavirus vaccines made by Sinovac arriving last week at a facility in Indonesia. Image: The Conversation/Indonesian Presidential Palace/AP

Australia won’t have much latitude with a stronger China
In the case of Australia, however, China is unlikely to put the stick down any time soon.

As Dirk van der Klay, a research fellow at ANU, explains, painting a stark contrast between Southeast Asia and Australia serves the purpose of reminding the region of the benefits of staying in Beijing’s good books — as well as the costs of crossing it.

While countries like the US, Britain and France have at least offered Australia some rhetorical support in its China predicament, Australia’s most significant Southeast Asian neighbours have been notably quiet.

With China’s relative power set to grow further in 2021, Canberra might feel even more uncomfortable. But as former senior Singaporean diplomat, Bilahari Kausikan, remarked in October, Australia is “not in a unique position” as “almost everybody” in the region faces the same challenge of managing relations with China and the US to maximise their economic and security interests.

Australia’s unfortunate distinction is that because its relations with China have already sunk to such depths, it has less ability to negotiate a path between the two great powers.

Elevating partnerships with countries like Japan, India and Indonesia offers one way forward, but alongside this needs to be a pragmatic strategy for getting the China relationship at least back on an even keel.

Tokyo, New Delhi and Jakarta have all had serious challenges with Beijing, but their relations never fell to the depths of the current China-Australia tensions. These countries might offer some useful advice here, too.

Dr James Laurenceson is director and professor, Australia-China Relations Institute (ACRI), University of Technology Sydney. This article is republished from The Conversation under a Creative Commons licence. Read the original article.