Many are hoping that when Donald Trump—one of the most divisive U.S. presidents in the past century or more—leaves office, the historically elevated levels of partisanship in U.S. politics will at least begin to subside. But the opposite is vastly more likely.

There are short- and intermediate-run, as well as long-run reasons for this result that have little to do with the Trump phenomenon. Most important and immediately, there is a gigantic and increasingly unbridgeable divide on economic policy. And the outcome of this ongoing fight will have an enormous impact on the lives and livelihoods of most Americans.

First and foremost, there is fiscal policy: the federal government’s use of spending and taxation, in this case to facilitate an economic recovery. The Republicans will try to block most helpful spending as much as possible, perhaps most important as a fundamental part of their political strategy.

The Republicans, not surprisingly, are fighting and will continue to fight against all of the structural reforms that would democratize this country.

They learned something from the Great Recession of 2008-09. They fought and reduced Democratic stimulus plans—which were not big enough to begin with—as much as possible. The end result was unemployment in October 2010 was still at 9.4%; and millions more jobs were lacking if we look at the decline in employment since the recession, rather than the unemployment stats only.

This was a resounding success, from their point of view. In the November 2010 elections, Republicans picked up 63 seats in the House, flipping control of the chamber, and gained six seats in the Senate.

This strategy also coincides with a long-established tendency of Republican Party leadership, since the 1970s, to run up federal budget deficits when they are in power and then return to fiscal conservatism when the Democrats take office. And finally, there are also some true believers in high Republican places; Mitch McConnell used some of these in the Senate to tell Trump “no can do” just before the election, when Trump leaned on Republican senators to reach a deal with the Democrats on the Heroes 2.0 COVID stimulus bill. Trump backed off, perhaps calculating that a fight with Senate Republican leadership just before the elections was not worth the risk.

Senate Republicans also showed their determination to deprive the unemployed of benefits as far back as July, when they waited until just four days before unemployment benefits expired, before even responding to the Democrats’ proposal that would renew them.

Determining the level of employment

Fiscal and monetary policy are in general the main determinants of the level of employment and unemployment in our economy, as well as economic recovery at present. 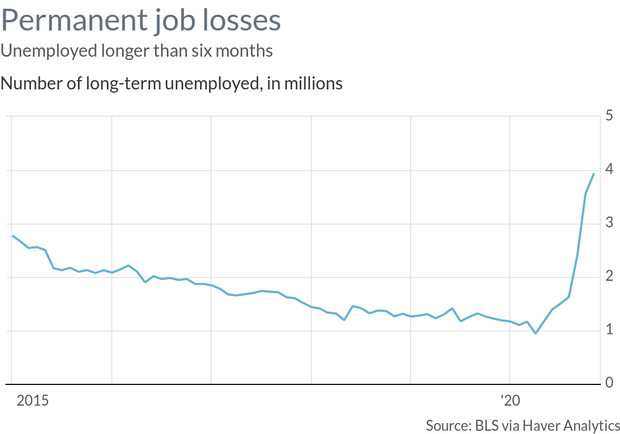 This is of course vitally important when the economy is still down more than 9 million jobs since February. We have an estimated 26 million people who are going hungry in the United States, and some 7 million to 14 million at risk of eviction. And many of the jobs lost in the hardest-hit industries, such as retail and hospitality, will not be coming back. Many workers will have to change occupations and some will be unemployed long-term; at present, the percent of unemployed who are long-term (more than six months out of work) is at 36.9%, up from 19.2% in February.

Much more spending will be necessary just to pull the economy back to the levels of employment and unemployment that we had before the COVID recession, and to help the millions who have been hurt by the pandemic. We still don’t even know how much worse the pandemic itself will get before the effects of vaccination can seriously reduce infection rates.

Yet Republicans have fought tenaciously—even contributing to their own loss of the presidency—in order to block desperately needed funding for health care and education to state governments.

It appears that the Republican leadership’s recent willingness to finally negotiate a COVID relief package was driven by the risk that continued refusal could result in losing the Jan. 5 runoff election for the two senators from Georgia. This election will determine who controls the Senate.

The tyranny of the minority

All this is just a glimpse of what one part of one big policy difference—on fiscal policy—between the two parties in power would mean for the most of Americans in the immediate and near future. Over the longer run, it means much more. For it is now well-established that America is structurally set up for minority rule. And that minority is the Republican Party.

In the past four decades these structures have grown in their political importance, size and scope. This applies to gerrymandering, as in the Republicans winning a 33-seat majority in the House of Representatives in 2012, with more than a million fewer votes than the Democrats. It applies to the Electoral College, with eight of the past 20 years under Republican presidents (George W. Bush and Donald Trump) who lost the popular vote; and to the Senate, where about half the U.S. population elects 80% of the Senate, while the other half gets 20%. And then there is voter suppression that targets minority and poorer voters, and disenfranchises them disproportionately.

Structural reforms will be needed just to make the country into enough of a democracy so that we can actually vote for governments that might treat some of the pathologies that have been cultivated over the past few decades.

These include an explosion of inequality that has doubled the income share of the richest 1%, and the institutional racism that in 2020 set off the largest protests in U.S. history. Not to mention the democratic governance we would need to move forward on the investments necessary to tackle the climate crisis before it is too late.

The Republicans, not surprisingly, are fighting and will continue to fight against all of the structural reforms that would democratize this country, and that would thereby vastly reduce their chances of holding national power. Together with the policy differences between the parties, this reality will remain the long-run, material basis for an increasing partisan divide, until these structural problems are resolved.