December 11, 2020, is another December day that should “live in infamy” in the United States. On that day total US deaths due to Covid-19 surpassed the 291,557 American combat fatalities in World War II. The European Union saw much the same grim toll, with more than 300,000 dead. (See figure.) 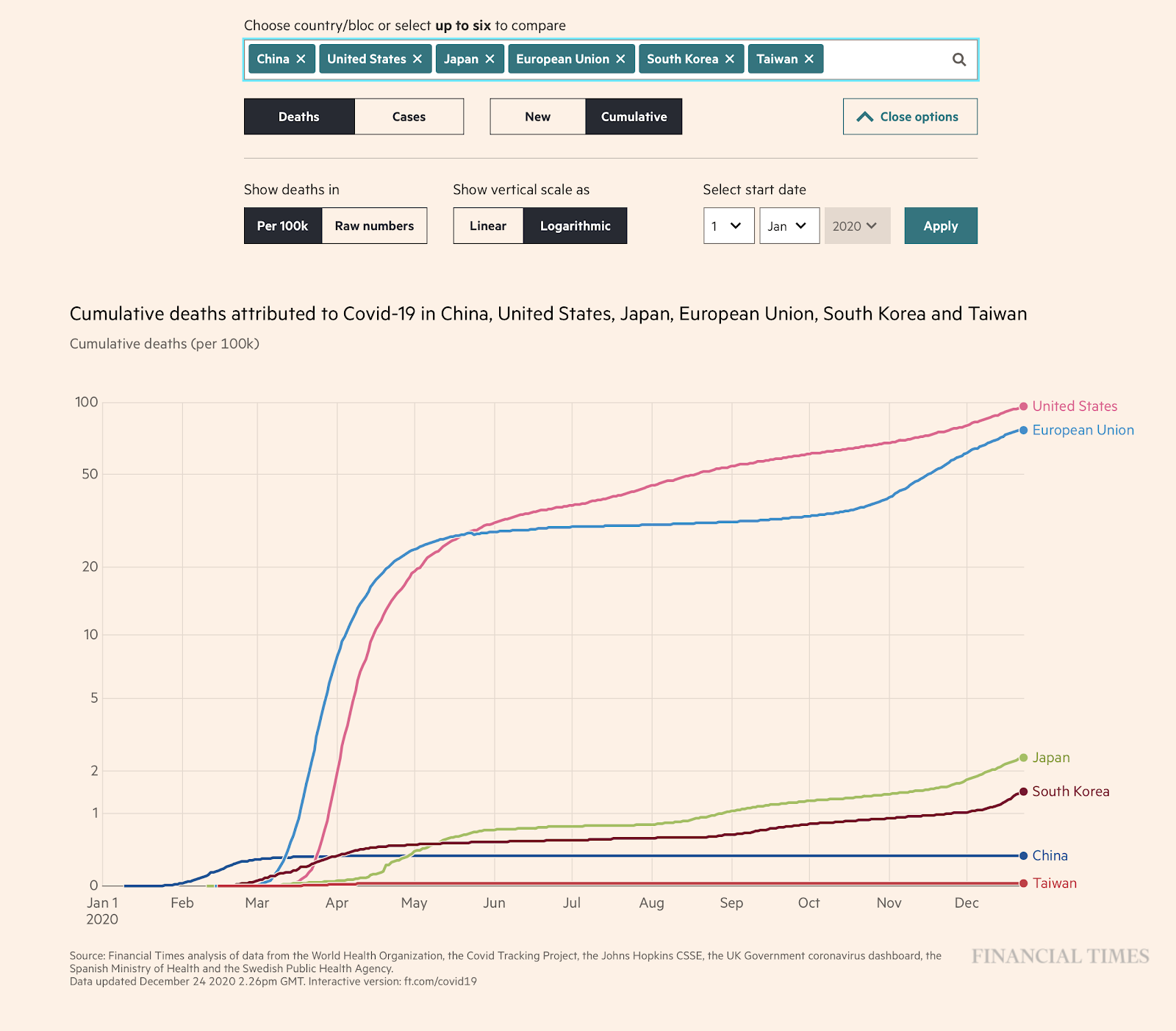 It did not have to be this way. China provides a striking and instructive contrast. It was the first to recognize this strange new virus when it appeared in the Wuhan outbreak late in December 2019. China faced a “closed-book exam,” and had to write its own playbook.

A year later as 2020 drew to a close, China had only a total of 4,764 Covid-19 deaths, an extraordinary achievement given the country’s population of 1.4 billion, 18% of humanity. On New Year’s, massive crowds came out in Wuhan and elsewhere in China to celebrate – in stark contrast to a deserted Times Square in New York City. The playbook China wrote proved remarkably successful.

China’s success was achieved by containment. First came the very tight and demanding lockdown in Wuhan, a city of 11 million, and in surrounding Hubei province with nearly 60 million. The Wuhan lockdown ended in 76 days, which now seems mercifully brief to those of us who have endured the last year of suffering and death in the United States.

Less severe but demanding measures were put in place for 700 million people, half of China’s population. A superb and honest account of life under these measures outside Wuhan by Peter Hessler can be found in The New Yorker, “Life on lockdown in China: forty-five days of avoiding the coronavirus.”

The measures, though challenging, were not as severe as often portrayed in the West. The World Health Organization report on the pandemic in China issued in March pointed out that the containment effort was made possible by “the deep commitment of the Chinese people to collective action.”

And to this observer, it seems a determined and competent national leadership, basing its decisions on the best scientific input, was another key element.

China soon “flattened the curve,” meaning it had brought the virus under control (See figure). Testing, tracing, quarantining and treatment were carried out vigorously whenever even a few new cases were detected.

An example reported in the New England Journal of Medicine was the experience in Qingdao, China, a city of 9 million. On October 1, three cases of Covid-19 were detected. A total of 4,900 testing stations were set up in the city and suburban areas. In 10 days, 10.9 million people were tested, and a total of 12 cases were found and treated. The virus was contained.

Initially, however, in December 2019, things got off to a rocky start. Confusion, denial and poor, perhaps criminal, decisions were made in the first one to two weeks of the outbreak in Wuhan. Local officials responsible for this were dismissed.

Such confusion and denial are not surprising; they are always found upon the first outbreak of an unknown infectious disease. HIV/AIDS and Ebola are striking examples.

Despite the impressive achievement over a year’s time, much of the US coverage of China’s handling of the pandemic has remained focused obsessively on those early weeks to the exclusion of the events over the year that followed.

This coverage creates a deeply distorted picture. While the performances of Japan, South Korea, New Zealand and Taiwan (see figure) have been hailed, and rightly so, China’s pioneering response has been ignored or relentlessly criticized in much of our media here in the US.

In contrast, countries in the region paid close attention to what China was doing, learned and behaved accordingly. Did the lack of such coverage in the West lead to our disaster? If so, we have suffered a stunning blowback due to our media’s dismissal of China’s feat.

Perhaps most disconcertingly, the response of China versus that of the US raises a serious question of values. To save lives, China did what the West did not; it shut down the economy completely when and where necessary. At the time, it was thought that this would be extraordinarily damaging to the economic future.

But suspension was terminated surprisingly quickly, and China’s economy grew again – at an annualized rate of 3.2% in the second quarter of 2020. It turned out that the ethical decision was also best for the economy and society.

It is often said that only a country with China’s form of governance could mount such a mammoth and effective containment effort. But clearly the US has the wherewithal to mobilize the entire population for an effort like China’s.

The US carried out just such a mobilization in World War II and lesser ones for lesser wars in many places on the planet. However, it chose not to do so for Covid-19. That ought to give us food for thought. What are we to say of a society that can mobilize itself to make war, but not to save lives?

The post Infamous US Record during Covid-19 Pandemic first appeared on Dissident Voice.