On Tuesday, Senate Minority Leader Chuck Schumer, D-N.Y., called for the FBI, Transportation Security Administration, and Department of Homeland Security to put rioters who stormed the Capitol on a no-fly list, barring them from airline travel in the U.S. “Any of those who were inside the Capitol should not be able to fly and should be placed on the no-fly list,” Schumer said, waving a piece of paper with a “no” sign over a plane. “We are calling on the authorities — FBI, TSA, Department of Homeland Security — to put them on the no-fly list immediately.”

“The insurrectionists who breached the U.S. Capitol fall under the definition of threats to the homeland,” Schumer said. The senator’s request had followed similar statements issued last week by other Democrats. In response to the requests, an FBI official said using the no-fly list was “something that we are actively looking at.”

“Doubling down on use of the no-fly list will entrench an error-prone and unconstitutional system.”

To civil liberties advocates, though, Schumer’s call echoes the groundswell of paranoia, anger, and anxiety that followed 2001’s September 11 attack — an event that spurred security agencies and government officials to transform the United States into a quasi-police state searching for suspected terrorists. The shocking riot at the U.S. Capitol last week, described by many as the start of an insurrection, looms as a similar turning point. The “war on terrorism” and its chilling of toolbox of security, legal, and political implements look ready to turn against the homegrown threat of domestic terrorism.

“Doubling down on use of the no-fly list will entrench an error-prone and unconstitutional system, and communities of color will continue to bear the brunt of it,” said Hina Shamsi, director of the American Civil Liberties Union’s National Security Project.

In the years following the September 11 attacks, tens of thousands found themselves on the no-fly list without any specific allegation against them, after having been targeted without due process, based on classified criteria. In 2014, The Intercept published documents from the National Counterterrorism Center revealing the criteria for how individuals are placed on the broader terrorism watchlist from which the no-fly list is constructed.

Introduced behind the scenes, the criteria for watchlisting possible extremists — and potentially banning them from flying — revealed an opaque system rife with potential for abuse. The guidelines allowed federal authorities to tie individuals to terror groups without hard evidence and gave unilateral authority to a single White House official to designate entire “categories” of surveilled people onto both the watchlist and no-fly list. “Fragmentary information” could suffice for officials to nominate someone to the list, and even dead people could be watchlisted.

Although efforts have been made to improve accountability over use of such secret lists in response to public pressure, the no-fly list has frequently caught innocent people in its net. In some cases, particularly those that drew in other forms of law enforcement abuse and surveillance onto targeted individuals, it seemed to transform into an unaccountable tool for security agencies to discriminate against, punish, or pressure ordinary people as they chose.

The no-fly list is considered by many to be an emblematic example of an abusive security measure initially justified on the grounds of finding and stopping terrorists, but which quickly expanded well beyond its intended mandate. The list has been abused to target individuals who were not suspected of terrorism, including for the alleged purpose of pressuring them to become government informants.

Most troublingly, it operates in an manner almost entirely without due process, empowering security agencies to deprive individuals of their rights and making challenges difficult for those who wind up listed. The list’s targets often had little means to fight back and preserve their rights. “The process to clear your name from it is a due-process nightmare,” said Shamsi.

“The government’s terrorism blacklists are a cautionary tale, not a promising model.”

The bad taste left by these post-9/11 practices has led civil liberties experts to warn that the no-fly list is a blunt instrument, ineffective and excessive for policing the threat of domestic extremism. Years of lawsuits and public pressure have resulted in some reforms to the program, including letting people know when they’re actually on the no-fly list, as well as legal rulings finding that other forms of watchlisting were unconstitutional. Yet the obvious problem — empowering officials to ban people from flying based on nothing more than private suspicion — remains.

“I think giving the government the ability to prevent people from flying on the basis of officers’ hunches, or on the basis of evidence that isn’t tested in court, is an invitation to unfairness and abuse,” said Jameel Jaffer, a civil liberties attorney and director of the Knight First Amendment Institute at Columbia University. “In my view, the government’s terrorism blacklists are a cautionary tale, not a promising model.” 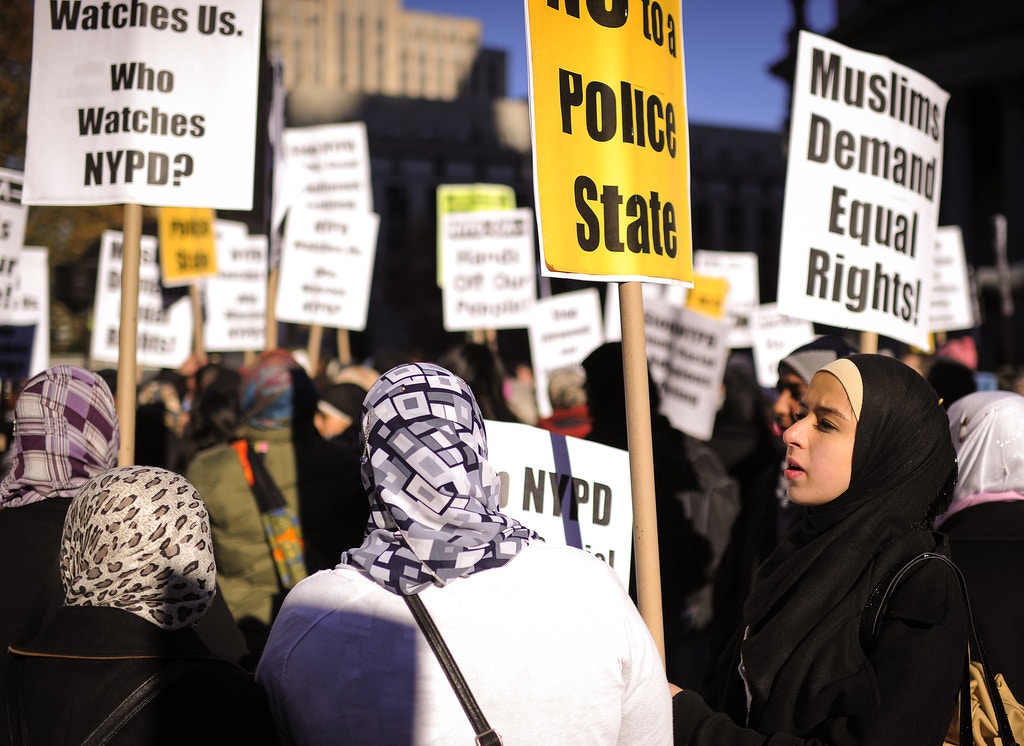 Protesters stage a rally in Foley Square against police brutality and surveillance of the Muslim community in New York on Nov. 18, 2011.

Viral social media reports of individuals suggesting some people had already been blocked from travel after being put on the no-fly list seem to have been premature: The videos mostly showed people — apparently Trump supporters — being removed from flights for unruly behavior or refusing to comply with airlines’ Covid-19 mask mandates.

Nonetheless, prominent Democrats urging an insurrectionist no-fly list, along with others calling for a new domestic war on terrorism, clearly indicate which way the winds are shifting. Civil libertarians have been fighting to bring the power of the no-fly list under control — in 2019, then-Rep. Justin Amash, L-Mich., introduced a bill seeking to prevent anyone from being placed on the list absent a federal terrorism conviction — but have gotten little traction. The attacks on the U.S. Capitol, meanwhile, seem to have generated a renewed political legitimacy for expanding the program.

Such anti-“terror” measures in the past have wound up being used against minority communities after being initially being justified following right-wing attacks. The Oklahoma City bombing, carried out by anti-government extremist Timothy McVeigh in 1995, spurred the passage of the Antiterrorism and Effective Death Penalty Act of 1996.

“At the signing ceremony, President Bill Clinton boasted that the AEDPA ‘strikes a mighty blow’ against terrorism,” wrote Diala Shamas and Tarek Ismail, two attorneys with experience in the excesses of anti-terror laws, in the Washington Post. “The mighty blow came — not against the nebulous concept of ‘terrorism,’ but against marginalized communities. It reduced criminal defendants’ access to courts; it made noncitizens who had lived legally in the United States for years suddenly subject to automatic deportation for minor offenses. The material support laws born in the AEDPA ballooned to encompass protected First Amendment conduct, landing hundreds of Muslims in jail. In 2010, the Supreme Court contorted itself to find that if a humanitarian organization gave legal advice to certain groups on peace negotiations, they would be committing criminally sanctionable material support to terrorists.”

“The no-fly list is notorious because from the beginning, it has unjustly targeted Muslims, brown, and Black people based on vague and over-broad criteria.”

The no-fly list itself already has a record of targeting marginalized communities. “The no-fly list is notorious because from the beginning, it has unjustly targeted Muslims, brown, and Black people based on vague and over-broad criteria,” Shamsi, the ACLU lawyer, said.

Moreover, tools for dealing with criminality like that seen in the Capitol riot — tools that are accountable to courts — already exist. “If the government has good reason to believe that a person is planning to engage in violence or other unlawful activity, we want the government to arrest the person, not just prevent him or her from flying,” Jaffer, the Knight First Amendment Institute director, said. “If it doesn’t have enough evidence to justify arrest, but it still has some reason to believe the person may present some kind of threat, then it can, and should, subject the person to additional screening at the airport.”

With calls from powerful figures like Schumer, that sort of restraint may not be likely. As a result, the public fury over the U.S. Capitol attack seems primed to result in law enforcement overreach. Security agencies have already begun warning of a potential wave of terrorism across the United States in anticipation of the January 20 inauguration of President-elect Joe Biden, including an FBI bulletin warning of possible armed rallies and attacks being planned in all 50 states. It is unclear how much of the official warning is exaggeration based on what is presently known, but national security agencies have shown no hesitation in the past to inflate threats in order to expand their authorities.

In the heated environment following the Capitol attack, expanding failed or abusive tactics like the no-fly list risks inflicting further harm on civil liberties while doing little to mitigate the danger posed by domestic terrorism.