Tear Gas Ted is getting Tough On Crime and Anarchy, and I’ve got some analysis for you.

Oregon Public Broadcasting has been giving a lot of play to Mayor Wheeler’s latest couple of speeches, where he once again criticized “violent anarchists” for doing terrible things like spray-painting memes on plywood, or breaking the windows of outrageously expensive downtown corporate property that he confuses for “local businesses owned by people of color” (I think that’s a direct quote of the man), and, of course, most recently, for allegedly punching him in the shoulder. 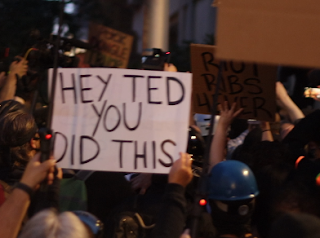 Not wanting to interfere with the news cycle, or sensing the bad optics that might be involved, he took a week off from criticizing the Criminals and Anarchists (interchangeable terms, of course) of Portland, while the far right was laying siege to the Capitol Building and attacking other state legislatures across the country, but now he’s had enough time off, and he’s back at it.

OPB reporters have pointed out that the mayor has given a lot of speeches lambasting people he characterizes as anarchists, while talking very little about the far right.  I would add that he rarely has anything critical to say about his tear gas-happy police force, either, from which he derived his most popular nickname.

In his recent speeches railing against “Antifa anarchists,” which is, incidentally, a little like saying “liberal progressives,” he points out that most of them — all, he claims, in the instance of the riot declared by the police downtown on New Year’s Eve — are young white men.  He also said they should be prosecuted for their crimes, and probably he talked about reclaiming downtown from the constant protesting and window-smashing, but I couldn’t listen to the whole speech.  It was too predictable, and his voice grates on me too much.  But I heard enough — more than enough — to put his latest little public tantrum in some context.

Ted Wheeler is a very slick politician with inherited wealth, coming out of a long dynasty of local political power and timber money, which is how he got to be mayor.  He’s white and male, too, as with many of the “Antifa anarchists,” but that’s where the similarity ends.

I dressed up as a protester for Halloween — with a helmet, padded vest, and leaf-blower.  The latter device I used as a socially distant candy delivery mechanism, rather than for blowing tear gas back at the cops — and I was taken aback by the degree of thinly-veiled hostility I encountered among some of my fellow white male neighbors, particularly those in one of the many new, half-million-dollar houses in the neighborhood, who clearly agreed with their mayor’s perspective.  But I shouldn’t have been surprised.  After all, they may have been listening to their mayor’s speeches, among other things.

To be very specific about who these “Antifa anarchists” are that the mayor is referring to:  what I can say from personal knowledge is that half of them are housing insecure, because they can’t afford to live in this country the way it is these days, especially here, in the most rent-burdened city in the USA.  Privileged white male youth?  Hardly.  Not like Ted was, when he was young.  Not at all.

Also, as anyone who has spent much time at protests in Portland over the course of the past few months can attest, including the ones downtown, many of the participants are, in fact, Black, and from every other racialized group.  Also, many identify with genders other than male or female, which, of course, the mayor has no interest in knowing about, or acknowledging in his word use.  Also, many are not male, in any sense, but are female-identified females.  I wasn’t downtown on New Year’s Eve, so I don’t know offhand if that was the case on that particular night, but normally it is the case.

So, to recap, the mayor is laying into a fairly small group of largely homeless teenagers for being upset with the government, for a whole lot of different reasons, and for daring to express their anger by launching fireworks at City Hall — which is a very solid, stone building — and for smashing the windows of a Starbucks nearby (quite likely they did this after being thoroughly shot at and gassed by the cops).  But because he says they’re white and male, that’s supposed to tell us that they’re basically doing it just to party, and also they must not care about Black people, because if they did, they’d protest in a different way, and then everything would be better.  And if they’re not protesting on behalf of oppressed Black people, what could they possibly be upset about, since all us white folks are rich like him?

Now, the mayor, being the mayor of the city and the ostensible head of the police bureau, presumably knows that the Portland police — like all the other police departments across the country — have undercover agents.  He also knows that what these agents tend to do, among other things, is join the Black Bloc (“Antifa anarchists”), and be the first ones to throw rocks at windows.  This is an established pattern.  He ignores it.  This is not to say that it’s only undercover cops throwing rocks, but they do throw lots of them, no question about it, and he chooses to ignore this fact.

Why does the mayor have just about nothing critical to say about the far right, which is growing across this country?  Is it because they don’t tend to smash windows — at least until recently — but only attack random Black people and random black-clad white people with bear mace and pickup trucks?  Smashing windows is much worse for business than attacking protesters (or people perceived to be protesters).  Is that why he cares so much about the windows, and calls the smashing of the windows “violent,” unlike the plastic-coated steel bullets and other projectiles fired at us by the police, which he would call something like, “responding to violence with established crowd control techniques”?

The mayor repeats the line of the police chief, that there need to be prosecutions of these violent protesters.  The mayor knows full well that in order for there to be prosecutions, the police have to actually target specific people who have committed a crime, arrest them, and charge them.  At that point, the District Attorney can decide whether to press the charges, change the charges, drop the charges, or whatever, at his discretion.  He is an elected official named Mike Schmidt, and the mayor has just basically ordered him to get with the mayor’s “tough on crime” program, or else.  A much more polite, less mafia-sounding, and also perfectly legal, version of Trump’s talk with that election official in Georgia, really.

The police attack entire crowds methodically, almost never targeting specific people for specific acts, but just attacking everyone as soon as one person throws a water bottle.  That’s reality on the ground, regardless of the mayor’s fantasies.  After they attack entire crowds — causing serious injuries, sometimes permanent maiming, always psychological trauma — they round up a few stragglers and arrest them, often including journalists, medics and legal observers.  At which point the DA tends to drop the charges, because he has nothing to charge anyone with.  He’s also a progressive, unlike the gaslighting mayor, but that’s largely beside the point in this instance.

The biggest reason I suspect the mayor is choosing this moment to come down so hard on “Antifa anarchists,” and to try further to divide this grouping from the rest of the more progressive/radical segments of what remains of Portland as we once knew it, is that there will soon presumably be a Democrat in the White House again.  With Democrats in City Hall, in Salem, and in DC, what might we possibly have to complain about?  Even the mayor came out on one night to protest against Trump’s federal goons, when they were in town in larger numbers.  But that was different, clearly.

There are a lot of reasons for mainstream Democratic mayors like Ted to take the positions he does, in speeches like this one, and in his policies.  Such as his recent policy decision, along with the requisite two other members of the five-member City Council, to once again spend half of our local tax dollars on the police department in the 2021 budget.

But perhaps he’s just angry that he didn’t invest in plate glass and plywood manufacturers earlier in the pandemic, when he might have stood to make more money from his stock portfolio.

The post Why Does Mayor Ted Wheeler Hate Us So Much? first appeared on Dissident Voice.