It’s been obvious for a long time that the best way to stop the rise of right-wing extremism in America that everyone’s so worried about today is not to pass a bunch of authoritarian laws, but to reverse the policies of soul-crushing neoliberalism and domestic austerity which led to Donald Trump. Instead of doing this, the next president is already pushing a Patriot Act sequel and reducing the stimulus checks he’d promised the public before he’s even been sworn in.

President-elect Biden promised unambiguously that if voters gave the Democratic Party control of the Senate by electing Raphael Warnock and Jon Ossoff in Georgia earlier this month, checks of $2,000 would “go out the door immediately”. Warnock blatantly campaigned on the promise of $2000 checks if elected, literally using pictures of checks with “$2000” written on them to do so. This was not an unclear promise by any stretch of the imagination, yet when Biden unveiled the “American Rescue Plan” on Thursday, the number 1400 was written where the number 2000 should have been.

The argument being pushed out at the moment is that when Democrats were blatantly promising stimulus checks of $2000 what they really meant was that Americans would receive $1400 on top of the $600 checks they’d received earlier, and everyone should have just known this somehow (perhaps via some sort of psychic precognition or sorcery). Which of course makes as much sense as someone hiring you to do a job for a given amount of money and then paying you the amount promised minus the amount you’d made at your last job.

It’s just so emblematic of US austerity policies, which are so normalized they don’t even use that word. Keep people stretched so thin that even a paltry $2000 after months and months of nothing can be spun as an excessively exorbitant indulgence which must be scaled back to keep it reasonable. In reality a grand total of $2600 in the richest nation on earth after all this time would still be a huge slap in the face, but generations of media spin have gone into keeping Americans from attaining that level of rightful entitlement.

So as of this writing the internet is full of angry Americans actually typing the words “$1400 is not $2000”, which is totally bananas. People should not have to say that the number 1400 is not the same as the number 2000. It feels like if my Twitter feed was full of people saying “Cars are not birds”, or “Pogs are not iPhones”, or “Mimes are not salad”. People should not have to make such self-evident clarifications.

But they apparently do need to make such clarifications, because scumbags like Adam Schiff are looking them right in the eye, sharing information that says “$1,400 checks” on it, and telling them that it says “$2000 relief checks”. 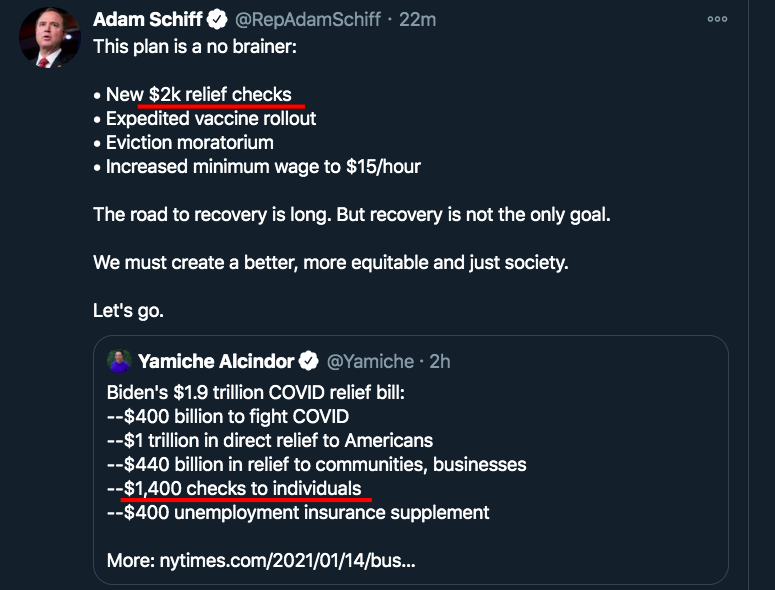 So again, it’s pretty clear that America isn’t going to attempt to reverse the conditions which created Trump and all the extremist factions that everyone’s been freaking out about since the Capitol riot. Obama led to Trump, and the strategy going forward is to just keep tightening the neoliberal screws like both Obama and Trump did throughout their entire administrations. And, of course, to advance new “domestic terrorism” laws.

As we discussed previously, Biden has often boasted of being the original author of the Patriot Act years before it was rapidly rolled out amid the fear and blind obsequiousness of the aftermath of 9/11. Now in the aftermath of the Capitol riot we are seeing a push to roll out new authoritarian laws around terrorism, this time taking aim at “domestic terror”, which were also in preparation prior to the event used to manufacture support for them.

In a new article for Washington Monthly titled “It’s Time for a Domestic Terrorism Law“, Bill Scher argues against left-wing critics of the coming laws like Glenn Greenwald and Jacobin‘s Luke Savage saying such “knee-jerk reactions” against potential authoritarian abuses fail to address the growing problem. He opens with the acknowledgement that “Joe Biden’s transition team was already working on a domestic terrorism law before the insurrection,” and then he just keeps on writing as though that’s not weird or suspicious in any way.

Scher lists among the growing threat of domestic terror not just white supremacists and right-wing extremists but “extremist left-wing domestic terrorism” as well. He approvingly cites Adam Schiff’s Confronting The Threat of Terrorism Act, which “creates a definition of domestic terrorism broadly encompassing plots that carry a ‘substantial risk of serious bodily injury’ along with an ‘intent to intimidate or coerce a civilian population’ or ‘influence the policy of a government by intimidation or coercion.'” The ACLU has unequivocally denounced Schiff’s bill, saying it “would unnecessarily expand law enforcement authorities to target and discriminate against the very communities Congress is seeking to protect.”

This is sketchy. Anonymous FBI officials basically tell NBC the violence at the Capitol could have been stopped if it wasn't for free speech and the first amendment. They're priming us for domestic terrorist laws.https://t.co/wJP7UhEIFB

Known CIA asset Ken Dilanian has also been trotted out to make the case that Americans have too many rights for their own good, co-authoring an NBC article titled “Worried about free speech, FBI never issued intelligence bulletin about possible Capitol violence“.

“FBI intelligence analysts gathered information about possible violence involving the U.S. Capitol on Jan. 6., but the FBI never distributed a formal intelligence bulletin, in part because of concerns that doing so might have run afoul of free speech protections, a current and two former senior FBI officials familiar with the matter told NBC News,” the article warns, making sure to inform readers that “experts say the lack of a domestic terrorism statute constrains the FBI from treating far-right and far-left groups the same as Americans who are radicalized to violence by Al Qaeda or ISIS ideology.”

We can expect to see more such articles going forward.

They’re not actually worried about “domestic terror”, they’re worried about any movement which threatens to topple the status quo. They want to make sure they can adequately spy, infiltrate, agitate and incarcerate into impotence any movement which provides a threat to America’s rulers and the system which funnels them wealth and power at the expense of everyone else. The movements which most threaten this are not rightists, who are generally more or less aligned with the interests of the oligarchic empire, but the left.

This is who they’ll end up targeting going forward, and whatever Biden and Company wind up rolling out to fight “domestic terrorism” will help them do so.

Thanks for reading! The best way to get around the internet censors and make sure you see the stuff I publish is to subscribe to the mailing list for at my website or on Substack, which will get you an email notification for everything I publish. My work is entirely reader-supported, so if you enjoyed this piece please consider sharing it around, liking me on Facebook, following my antics on Twitter, throwing some money into my tip jar on Patreon or Paypal, purchasing some of my sweet merchandise, buying my new book Poems For Rebels (you can also download a PDF for five bucks) or my old book Woke: A Field Guide for Utopia Preppers. For more info on who I am, where I stand, and what I’m trying to do with this platform, click here. Everyone, racist platforms excluded, has my permission to republish, use or translate any part of this work (or anything else I’ve written) in any way they like free of charge.