A parade of oil and gas companies nobly announced this week that they will review their political donations in the wake of last week’s riot in Washington, D.C. — an attempt to distance themselves from the spectacle of election fraud conspiracists and white supremacists attacking the Capitol building and temporarily halting the election certification process.

Marathon Petroleum, Occidental Petroleum, and the employee political action committees for ConocoPhillips and BP temporarily froze their contributions. Exxon Mobil and Chevron are reviewing their donations. Even energy industry association spokespersons for the American Petroleum Institute, the Independent Petroleum Association of America, the American Fuel and Petrochemical Manufacturers, as well as a leader of the Koch network said the attack on the Capitol will factor into their future giving.

Those who have spent years confronting fossil fuel industry-funded disinformation campaigns, raising alarms about the climate crisis, are unimpressed with the moves. The origin of the storming of the Capitol was a series of lies, and there is no indication that the fossil fuel industry is taking a meaningful stance against high-risk deceit.

“They have been funding disinformation and anti-climate politicians for a very long time.”

In many ways, fossil fuel companies laid the groundwork for the widespread acceptance of lies big enough to cause an existential threat to democracy’s survival — even humanity’s. “Lying has become a habit,” said science historian Naomi Oreskes, whose book with Eric Conway, “Merchants of Doubt,” documents how veterans of the tobacco industry’s misinformation efforts seeded climate denial among the media and lawmakers.

“They have been funding disinformation and anti-climate politicians for a very long time,” she said over email, of the fossil fuel industry. Oreskes said reconsidering political donations for election misinformation is a belated gesture: “A day late and a dollar short. Or, rather, three decades late and hundreds of millions of dollars short.”

Meanwhile, the industry still has not come close to fully divesting from nor making amends for their spread of lethal climate disinformation.

To climate scientist Michael Mann, the fossil fuel groups’ announcements that they will review political giving serves to evade attention from the fact that, during the Trump administration, the oil and gas agenda was supercharged by the racist rhetoric and lies that swayed elections in the direction of their favored candidates. Indeed, never has the fossil fuel industry’s agenda been carried to fruition so completely as it was over the past four years, achieved using what Mann described to The Intercept as “red meat” thrown out for the racist right, including election disinformation.

“It is the fossil fuel industry, the front groups that they fund along with plutocrats like the Koch brothers — these are the groups that have been pulling the strings, that have been throwing out the red meat, that have been instigating this racially motivated, treasonous rebellion by the disaffected base of the Republican Party,” said Mann. “They’re playing with fire, and it’s almost like they don’t really care about democracy.”

Thousands of Donald Trump supporters storm the Capitol following a “Stop the Steal” rally in Washington, D.C., on Jan. 6, 2021.

The fossil fuel companies will presumably be reexamining donations to politicians who supported the “Stop the Steal” movement to overturn election results. Some 139 U.S. representatives and eight senators voted against certifying President-elect Joe Biden’s win, including lawmakers like Sen. Ted Cruz, R-Texas, who has received extensive contributions from some of the oil and gas companies now denouncing the Capitol attack. Perhaps they will also reconsider future contributions to President Donald Trump himself, who incited the insurrection and received $14,696,347 from the oil and gas industry for the 2020 election cycle, according to the Center for Responsive Politics.

Many more individuals and groups would have to be included in a comprehensive audit of the fossil fuel industry’s involvement in the events leading up to the storming of the Capitol. Among those listed as coalition partners on the March to Save America website, which called on Trump supporters to defend the president, was the Rule of Law Defense Fund, a dark-money group started by the Republican Attorneys General Association.

Fossil fuel companies like Koch Industries and Exxon have donated to the attorneys general association and groups backed by the industry — like the Koch brothers’ Freedom Partners Chamber of Commerce and the Edison Electric Institute — have directly contributed to the Rule of Law Defense Fund. The Rule of Law Defense Fund even went so far as to put out robocalls promoting the march, as Documented reported.

Also listed on the march’s website was Turning Point USA, which recently entered into a partnership with the Koch-backed American Legislative Exchange Council. ALEC, as the group is known, brings together lobbyists and lawmakers to promote industry friendly legislation at the state level. Turning Point and ALEC are working together to place right-wing students on university boards of regents, according to reporting by the Center for Media and Democracy. Koch-linked groups also helped mobilize this summer’s reopen protests — a movement that significantly overlapped with Stop the Steal.

Meanwhile the Twitter account for the climate denial website Climate Depot tweeted on January 6: “Striking fear in politicians is not a bad thing.” A subsequent tweet said, “Thomas Jefferson: ‘The tree of liberty must be refreshed from time to time with the blood of patriots and tyrants.” Climate Depot is run by the Committee for a Constructive Tomorrow, a think tank that the fossil fuel industry has funded in the past. Its Twitter was just one among several climate denier accounts that DeSmog documented supporting the Stop the Steal movement or spreading disinformation in the aftermath of the Capitol attack. 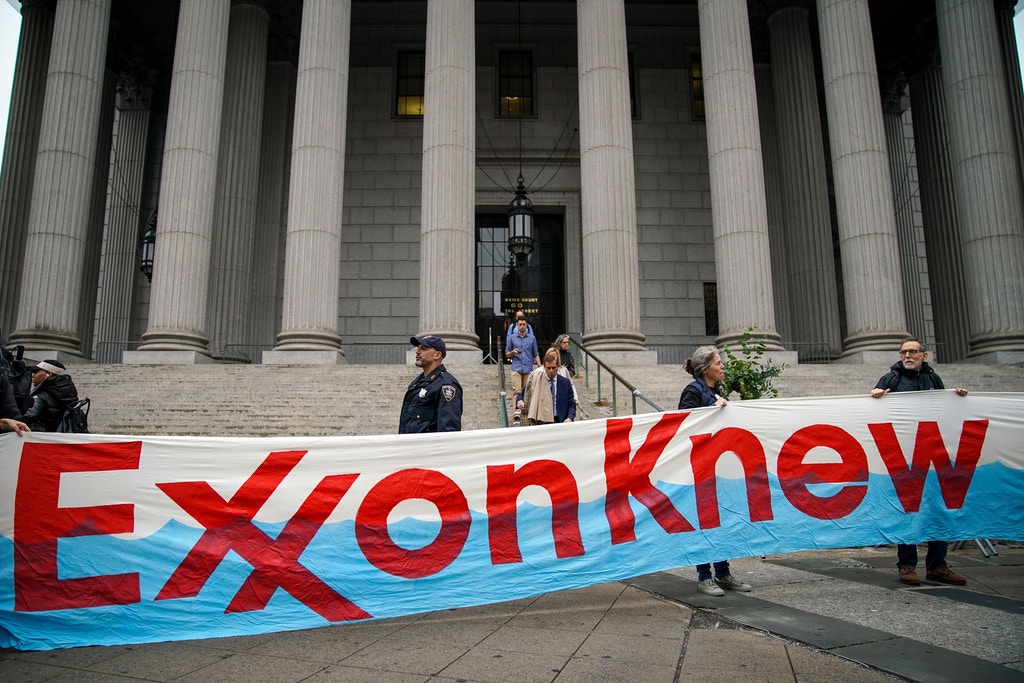 Environmental activists rally for accountability for fossil fuel companies outside of the New York Supreme Court in New York City, on Oct. 22, 2019.

Mann, the climate scientist, pointed to parallels between the industry’s attempt to distance itself from election misinformation and its recent move to steer away from all-out climate denial. “They’ve done the same thing with climate denialism as it has become untenable to deny that climate change is real and happening,” he said.

The story of the climate lie goes back to the 1980s. In the early part of the decade, a task force of fossil fuel industry representatives was meeting regularly to talk about the emerging climate science they were helping produce. Just as the science was becoming clear, the American Petroleum Institute and companies like Exxon Mobil began pouring money into disinformation. To cast doubt on climate science, the industry lobbied, funded new organizations, published ads, paid for studies, bought scientists who would act as media pundits, and of course lavished millions of dollars on politicians who would advance their cause.

As a young scientist and author of a key study showing that recent high temperatures were aberrations in the historical record, Mann became a target of the industry’s denial machine. Media pundits and politicians attempted to smear his credibility. He received death threats.

Sen. Jim Inhofe, R-Okla., who is among the politicians who have received the highest donations from the fossil fuel industry, went so far as to call for Mann to be investigated as a criminal.

By the mid-aughts, under pressure from scientists, environmentalists, civil society, and shareholders, the industry began to distance itself from denial. But the lies were well rooted by then, in part because of how well they fit into dreams of unfettered capitalism championed by the right. (Oreskes, the science historian, and her co-author Conway have a forthcoming book, “The Magic of the Marketplace: The True History of a False Idea,” which will focus on how ideas about free market fundamentalism helped normalize misinformation.)

Meanwhile, the fossil fuel industry continued to donate money to politicians who purveyed climate lies. A 2019 analysis by the Center for American Progress Action Fund of the outgoing 116th Congress counted 150 Republican members who did not believe that human activity causes climate change. They’d collectively accepted $68 million in donations from the fossil fuel industry.

“They haven’t given up in their effort to block the clean energy transition and keep us addicted to fossil fuels. They just changed their tactics.”

And Trump himself, perhaps fossil fuel firms’ all-time biggest champion, accepted more than $14 million from the oil and gas industry for his reelection campaign. Over the course of his administration, Trump dismantled much of the existing government infrastructure for confronting the climate crisis and promoted outright deniers to positions of power.

Mann’s book, “The New Climate War: The Fight to Take Back Our Planet,” published this week, argues that the industry never truly quit promoting climate disinformation. “They haven’t given up in their effort to block the clean energy transition and keep us addicted to fossil fuels,” he said. “They just changed their tactics to tactics they think they can get away with.” He pointed to fossil fuel industry efforts to derail state-level policies to incentivize renewable energy development, bolster false solutions like geoengineering, spread the idea that the climate problem is about individual lifestyle choices, and promote a sense of doom, that nothing can really be done about the climate crisis — which, Mann argues, is simply untrue.

What should the industry do if it truly wants to make amends for sowing chaos? “That’s easy,” said Oreskes. “Stop funding and fomenting disinformation, stop exploring for new oil, gas and coal reserves, and start working on a new business model that shifts to renewable energy, or something else entirely.”

“I think it is tragic that it took an insurrection for them to rethink their strategy,” she said. “I hope this will prompt a deeper self-examination. An awful lot is at stake here.”