Some organizers in Illinois recall getting “laughed out of the room” for supporting the abolition of money bail five years ago. But on January 13, Robert Peters, a longtime advocate for ending cash bail and now a state senator from Chicago, saw his legislative proposal to end money bail pass the General Assembly, along with a comprehensive package of criminal justice reforms written by the state’s Black Caucus. Democratic Gov. J.B. Pritzker has strongly indicated that he will sign the bill, which will make Illinois the first state in the country to end a detention system that is demonstrably racist and classist.

Labor groups, abolitionists, and local nonprofits formed a coalition to end money bail shortly after powerful state players derided activists who argued against money bail in court and led organizing drives throughout the state. Their four-year campaign, which brought pressure against the state and gifted them a close alliance with the Black Caucus, made sweeping reforms thinkable. It was the movement for Black lives and the 2020 uprising that made them inevitable.

The reforms, which would go into effect in January 2023, will avoid the most dangerous pitfalls of quietly emerging “alternatives” to money bail: algorithms that predict peoples’ “risk” and detain those given higher scores, and surveillance devices that track people who maintain legal freedom before trial. These powerful tools are already used in a vast patchwork of jurisdictions across the country. Both are opaque and profitable and have gained prominence among bail reformers in places like California, where a failed effort to end money bail last autumn would have mandated prediction and increased surveillance.

In California and elsewhere, reformers have maintained that algorithmic prediction and “electronic monitoring” constitute safe, effective, and just substitutions for money bail. Advocates and experts say the tools are just as racist and classist as the money-bail system. Now, advocates see Illinois’ victory as reason for cautious optimism about the future of pretrial justice in the state and even nationwide. The bill reduces the reach of the criminal legal system, advocates said. They look beyond the money-bail ban, to the legislation’s unprecedented restrictions on an emerging and largely hidden system of prediction and surveillance.

Inmates at the Cook County jail head off to bond court after being arrested the night before in Chicago, Ill., on June 26, 2014.

In large swaths of the country, it is impossible to know how many people live with an electronic monitor. James Kilgore, now a leading expert on the surveillance technology, tried to find answers when he was released from an Illinois prison in 2009. He filed information requests with 35 states, but details were sparse. “When I asked for states’ analyses of their electronic monitoring, they said they didn’t have anything like that,” said Kilgore, a media fellow at the political and economic rights group MediaJustice.

MediaJustice researchers do know that monitoring is primarily leveled against poor, Black, and brown people. Surveillance supervisors frequently prevent monitored people from working jobs that have no fixed location, their 2019 report found, which rules out gig work and day labor opportunities. And other rules and restrictions are so vast that some monitored people see guilty pleas as their only escape. “If electronic monitoring had given me more movement, I probably would have fought the case,” one mother said. “My kids were not getting the healing they needed.”

In a distinctly remarkable step, any time “served” on an electronic monitor will be subtracted from a court sentence.

Once the Illinois reform package takes effect, an oversight board will publish quarterly data on counties’ use of monitoring — a basic move toward democratizing information. Electronic monitoring will become a last resort for the courts too. State prosecutors will bear the burden of proving that an accused person should be monitored, both before the person has been surveilled and after 60 days of surveillance. And in a distinctly remarkable step, any time “served” on an electronic monitor will be subtracted from a court sentence. Advocates like Kilgore say that electronic monitoring “is not an alternative to incarceration, but an alternative form of incarceration.” The Illinois legislation implicitly concurs.

All of this is unprecedented in the United States. “Illinois’ reform is the first of its kind in the country to regulate electronic monitoring,” said Kate Weisburd, an associate law professor at George Washington University. Otherwise, “it’s a bit like the Wild West. It’s expanding, and it’s being used with little restraint or limitation.”

The very companies contracted to produce the technology often write the surveillance rules and restrictions that govern monitored peoples’ lives, Weisburd added. “And it’s not just that they’re writing the rules. They also run the programs. They judge whether a violation occurs.”

Private companies outside the bail industry have been angling to profit from incarceration for years. It is paying off, and the ongoing public health crisis has opened up new markets. In his research, Kilgore has found that the Covid-19 pandemic has further normalized the use of big data and surveillance technologies within the criminal legal system. It’s gaining purchase outside the system, too, as general “contact tracing” technology — and then being fed back into carceral sites at greater rates. In Cook County, where Black residents comprise 70 percent of monitored people but 25 percent of the general populace, there were some tepid efforts to get people out of jail in 2020. As of this week, the county jail population is back to its pre-pandemic total. Electronic monitoring is up more than 50 percent.

“We have expanded the footprint of the carceral state,” Kilgore said, “by supplementing cages with technology.” 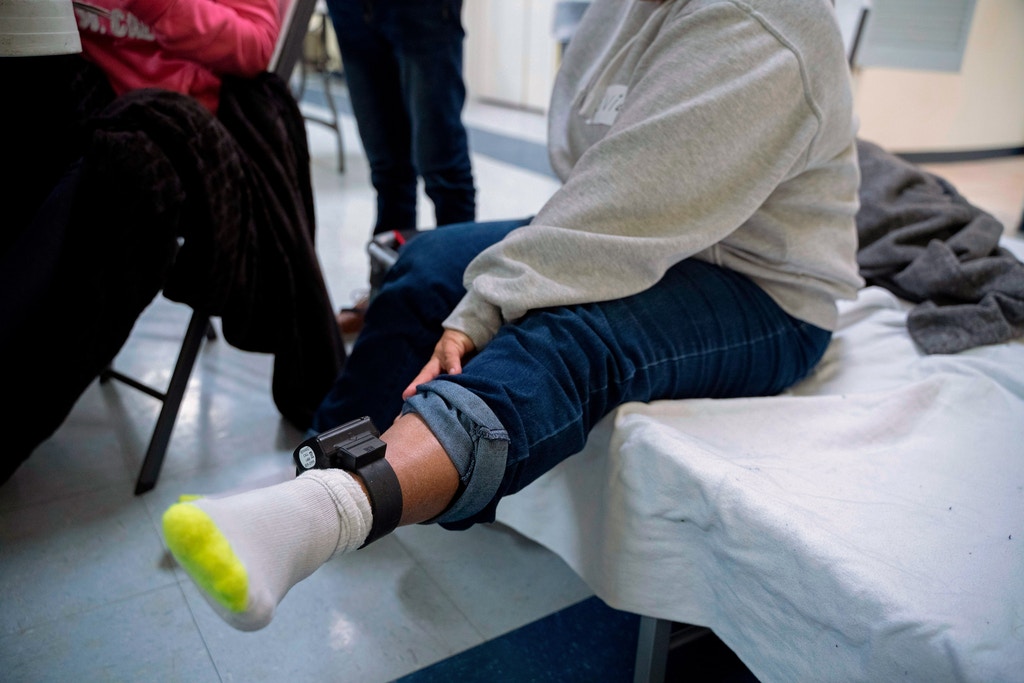 Elvia Garay, 39, from Puerto Cortés, Honduras, shows the ankle monitor she must wear after being released by U.S. Immigration and Customs Enforcement at the Basilica of San Albino in Mesilla, New Mexico, on Jan. 2, 2019.

As with electronic monitoring, algorithmic prediction is gaining popularity in Illinois and around the country. Known as “risk assessment tools,” the predictive instruments crunch hundreds of thousands of data points on prior defendants to predict whether an accused person in front of the court might be rearrested or skip hearings. An algorithm produces a “risk” score and on that basis recommends that an accused person be released before trial — with or without an electronic monitor — or detained. The algorithms are profiling tools for the 21st century: They process arrest histories, convictions, and missed court dates. Some use data on guilty pleas; others account for whether accused people have owned cellphones.

About 1 in 6 Illinois counties use these tools already. Cook County, home to one of the largest jail populations in the country, uses the Public Safety Assessment, an algorithm owned by former Enron trader John Arnold’s “philanthropy” company Arnold Ventures. Advancing Pretrial Policy and Research, an arm of Arnold Ventures, told The Intercept that algorithmic prediction “can play a positive role in a jurisdiction’s efforts to advance fair and equitable pretrial justice” but is not a necessary component of a just pretrial system.

And even after money bail is eliminated, individual judges will continue to have vast power in the process. The legislation says that accused people can be detained pretrial if they might willfully flee from prosecution or if they are “a real and present threat to the safety of a specific, identifiable person.” Judges will decide whether those conditions are met, said Colin Doyle, staff attorney at Harvard Law’s Criminal Justice Policy Program. “A lot will depend on how faithfully judges follow the spirit of these reforms.”

But the bill does chip away at judges’ authority by limiting the function of predictive algorithms, whose release-or-detain recommendations some judges use as established fact, not mere suggestion.

In all pretrial hearings, the court will start from the presumption that accused people should be released.

When the “Arnold Tool,” as some call it, was brought to Illinois in 2015, “it was a black box,” Grace said. “So were other tools.” The reform will have data about the algorithms published on a regular basis.

And it will not mandate the use of algorithms, a victory for would-be bail reformers everywhere. Months ago, reformers might have looked to California’s money-bail ban as a model bill. It would have mandated that the tools and kept data private.

In further contrast to California’s reform, the Illinois legislation requires algorithmic calculations to be sent to defense lawyers, who will be able to challenge the predictions. And in all pretrial hearings, the court will start from the presumption that accused people should be released (California’s bill presumed detention).

Every single person accused of a crime in Illinois will potentially be eligible for release, their legal freedom intact. “If this becomes law, Illinois would have some of the strictest restrictions on who can be incarcerated pretrial,” said Doyle.

Previously “virtually anyone accused of anything was eligible for detention without bond,” Grace said. “It should be very hard for the government to take away our freedom. In reality, it was very easy.”