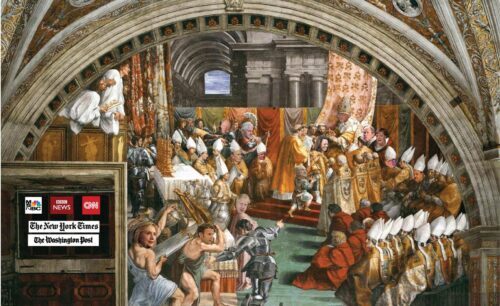 As those who have followed my published remarks in these pages might remember, I have always been sceptical about what one or more insistent author here and everywhere has told us about the immanent end of life as we know on the planet, Earth that is.

I realise that there are numerous writers who share what I was told in J-School (journalism school) is commonly called a “beat” (strangely perhaps the same term used for the area a police officer is assigned to patrol) and presumably become knowledgeable if not expert and remunerated if not rich for concentrating on such a “beat”. As a patrolman can become jealous of his or her “beat”, such urinary characteristics as are found among mammalian quadrapeds can also be found among bipeds without uniforms. Far be it from me to challenge the territorial instincts of higher or lower mammals. Yet I believe it is a mistake to suppose that merely instinctive or professional proprietary claims automatically endow the claimant with the comprehensive knowledge and understanding of the turf or terrain in question. So my scepticism should not be understood as an attack on those instinctual needs to constantly demonstrate boundaries or growl proficiently. It is merely a doubt as to whether biology is destiny.

That said, I have followed the development of journalism about issues categorised as environmental whether they were treated as economics, science, nature, law or simply human interest. Moreover I have followed it in English, German and to a lesser extent in French and Portuguese over the past 40 years. I mention this because there is a long-established tradition among people who write from the US to assume the position that like the UK they are not only the centre of the world but the centre of the universe — what they believe they know from their California or Carolina perches constitutes the wisdom of the civilised world.

As long as the San Andreas Fault has not led to the tsunami of all time, latifundia and “brazeros” supply verdura and fruta to gringos, and Hollywood stars have not been fired into homelessness, I will be forced to give due attention to the fears of global climate change at least in Tinseltown and vicinity.

If we were all still using the Julian calendar, it would be on a “midnight clear”– depending on the weather where one happened to be at that time. In some places it came by daylight– but that does not make such a good carol. It was Christmas in Christendom and all through the House, or was it the Senate, a few creatures were stirring, maybe even a mouse. The deplorable and ugly shaking their heads, surrounded the Santas elected in their stead. In the land taken for free and worked by the slaves, they hoped for some honesty among the depraved.

However, since 1582 the Gregorian calendar has been in use and Roman Christmas celebrated twelve days earlier.

Ah. yes, “climate change”. I was about to say that I now believe in “climate change” and its consequences for the habitability of the planet — Earth, that is. I have heard there is a faction of the ruling class which, unsatisfied with what they have done to this planet, hope to continue their ambitions on Mars or some other New World. Yes, I believe truly that humans — at least those whose indoctrination is based on the work of people in California and New York — not only can but already have changed the climate and done whatever they can to make this planet uninhabitable by ordinary human beings, many of whom live in the environment rather than whining about it. This anthropocentric climate change is epochal and apocryphal.

Above all it is political. Gore Vidal called the US, the United States of Amnesia. Neil Postman described it as “entertaining themselves to death”. Don Martin, in a brilliant series for the original MAD magazine called “When they say…”, drew an elderly woman bedecked with jewels who weighted her poodle with luxurious collars and kicked the poor: the caption was “I love animals. But she means, “I hate people.”

I believe that the Climate Change, the fear mantra developed to update the Club of Rome’s overpopulation chants, has come. St Greta, the Stockholm Alberich until she gets a real job, preached the crusade for the plenary indulgences to be marketed by the banking curia hiding behind the proclamations of the Kyoto, Paris, Davos and future ecumenical councils. I believe in one holy catholic bank instituted for the creation of debts and the punishment of sin. I believe in the virgin birth whether by males or females in the transhuman species.

in Capital, held by less than one percent, acting almighty, lords of the heavens and earth and that is seen and unseen.

in the lords, owners corporate, who today would murder any Jesus — Christ or not, pretenders to be god, eternally begotten, evil from evil, darkness from darkness, false from false, begotten, not made,

of one being with Capital. Through them all things are debauched, defiled and stolen.

For us and for our defilation they came from hell: by the power of deception, they became incarnate, from financial and military action and were made– mostly men — but women are not absent among them.

For their sake we are crucified under whomever they can muster;

It is we who suffer, die and are buried.

If on the third (or any other) day we rise again — because we refuse to believe their lies, they will bomb us from the heavens, while they are seated to the Right (the Left being hacked away).

It will come again in glory to kill the living and defile the dead, and its kingdom will have no end.

I believe in the Spirit of Capital, the lords, the takers of life, who proceed from Capital and their progeny,

With Capital and their progeny are worshipped and glorified.

It has spoken through the mass media, corporate, state and ostensibly “alternative”.

I believe in one wholly capitalist and catholic church.

I acknowledge that now masks, vaccines and all form of social distancing and denunciation will be needed for the forgiveness of sins, but that there will be no forgiveness for debt.

I look for the desecration of the dead and the strife of the world to come.