With a new government taking office, optimism regarding the capacity of government to ‘work’ again abounds. The Biden administration is making a host of program proposals that if enacted, will benefit a lot of people. However, as laid out below, the meta-problem of a crashed, dysfunctional economy that was patched over in 2009, but never repaired, persists. This was the subtext of rising political tensions before the pandemic arrived. In fact, most readers will be surprised by how off-kilter ‘the economy’ was a decade into an alleged recovery.

The political wisdom that people vote their economic interests carries with it implied models of how ‘the economy’ works. This has long been the ideological differentiator in policy disputes. Something seemingly straightforward like the Federal government sending out $2,000 checks— or not, is attached to a broader set of assumptions. Other nations have been covering lost wages due to the pandemic since it began. For all of the claims that ideology drives policy, American outcomes are determined by the political process, embedded ideology if you will

The point here isn’t the particulars of how the U.S. does social welfare versus other nations, but rather how, and by whom, social welfare decisions are made? No system of democratic choice would produce the concentrated political and economic power that now defines the U.S. Over the last half-century the logic of neoliberalism has been used to fundamentally reorganize Western societies. It is this reorganization that drives the political process. Private campaign contributions drive electoral outcomes, while neoliberal political economy structures the political process. 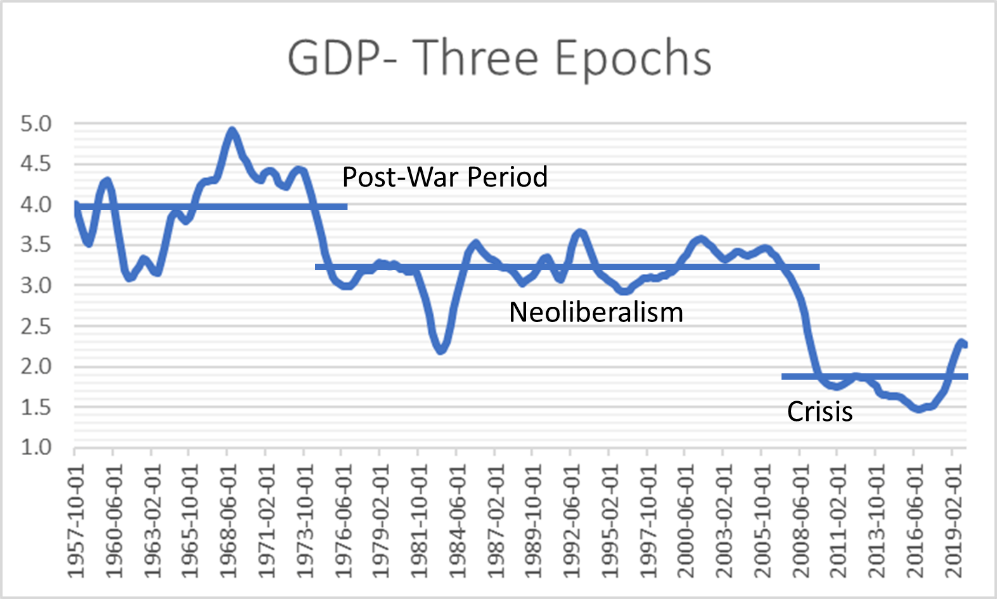 Graph: Following WWII, the U.S. had the only industrial economy left standing. The relative prosperity that this produced isn’t replicable outside of those historical circumstances. Neoliberalism is the capitalist response to diminished relative prosperity as global economic competition re-emerged. It brought capitalist competition home through deregulation, deindustrialization, and financialized looting. This produced a series of intermediate crises before the crash of 2008. As detailed below, the crash was never adequately addressed, and therefore it hasn’t ended. The pandemic is excluded from the graph to capture the state of the pre-pandemic economy. Units are 10 year rolling average percentage changes in inflation-adjusted GDP. Source: St. Louis Federal Reserve.

Consider: through what organizational logic would 99.9% of a democratic society be delivered $1,400 checks while 0.01% received $1 trillion? And while the proximate issue is these wildly disproportionate outcomes, the underlying problem is the system of distribution. While the left debate is around $1,400 versus $2,000 checks, all economic output in the U.S. gets distributed this way. How did the richest 0.01% ‘earn’ a trillion dollars in a few months of a devastating pandemic? It didn’t. $4 trillion in pandemic aid was distributed, leading to an increase in the wealth of the oligarch class of $1 trillion.

The Biden administration has made some constructive proposals, including delivering much needed aid to state and local governments, extending unemployment benefits, and raising the minimum wage to $15 per hour. It then immediately undermined them by stating that Mr. Biden would give Congressional Republicans veto power over the legislation. According to the Republicans who were asked, the $15 minimum wage is a non-starter. The establishment press is reporting that Mr. Biden expects the end result to be what can be gotten past Republicans.

Through this engineered dysfunction, legislative proposals are the ‘politics’ that go on to be passed through the legislative process. By giving the alleged opposition party veto power over his legislative proposals, Mr. Biden appears to be killing his own proposal. This leaves him to posture as a proponent of social spending, and then create the circumstances that assure that the social spending won’t be enacted. He gets political credit for ‘fighting for’ it without putting his benefactors at risk of paying higher taxes. 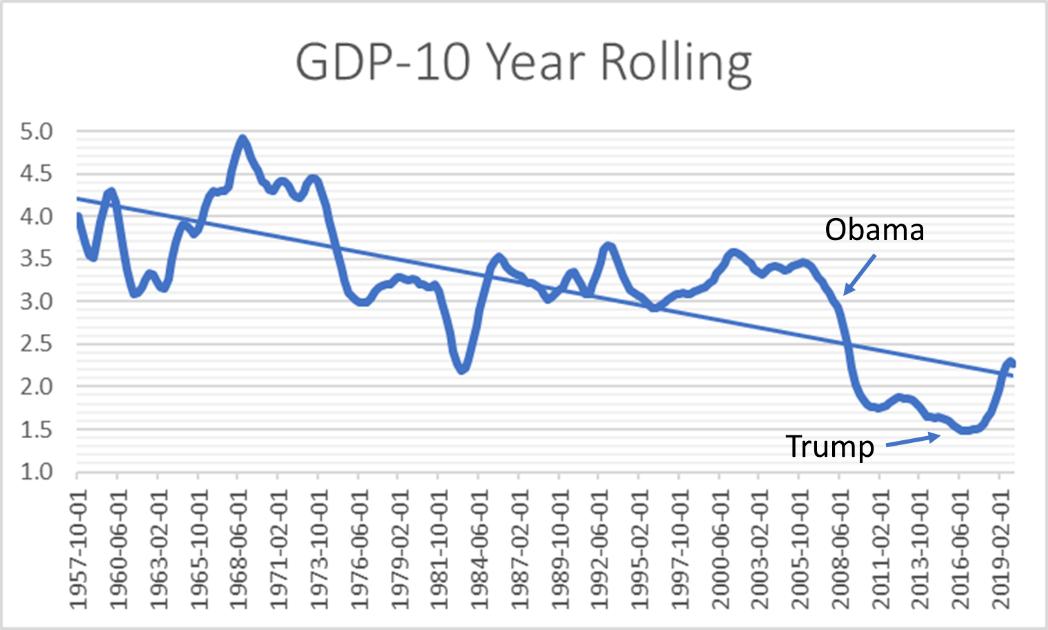 Graph: It is well understood that crises change political dynamics. Economic crises that result in the dispossession of a large proportion of a population tend to impact politics negatively, with early twentieth century Europe in evidence. Rolling 10-year average inflation-adjusted GDP is used to illustrate broad economic trends. Barack Obama was elected in the midst of an economic crisis. He failed to adequately address the crisis, setting the stage for the election of Donald Trump. This ongoing crisis was the economic backdrop before the Covid-19 pandemic struck. Source: St. Louis Federal Reserve.

The question is why do this? One answer: Wall Street wants to control both the demand for and supply of credit. Austerity boosts demand for credit in the short term, while killing it in the long term. If the Federal governments engages in social spending, Wall Street’s Payday lending operations suffer. ‘Subprime’ credit is the most profitable business line that Wall Street has. In ordinary circumstances, indebtedness leads to political docility because people are too busy paying their bills to concern themselves with politics.

The question of political motives is more complicated than this, but not a lot. The too-clever-by-half aspect of political gamesmanship around economic issues is that economic outcomes drive politics at a higher level. The purpose of the graphs in this piece is to illustrate that both Donald Trump and Jair Bolsonaro were elected at points of maximum economic failure by liberal, corporate-state, governments. Putting forward legislative proposals that aren’t intended to pass will produce political consequences.

While ‘the economy’ is conceived by economists and pundits in terms of recession and recovery, the U.S. economy has undergone three distinct phases since WWII ended (top graph). The first is the post-War economy based in the technocratic management of the New Deal. The second was the first stage of the neoliberal epoch, which featured lower average real growth than the Post-War economy and was punctuated by recurring finance-related crises. The third is the permanent crisis economy that began in 2008, and that now represents an epoch of its own. 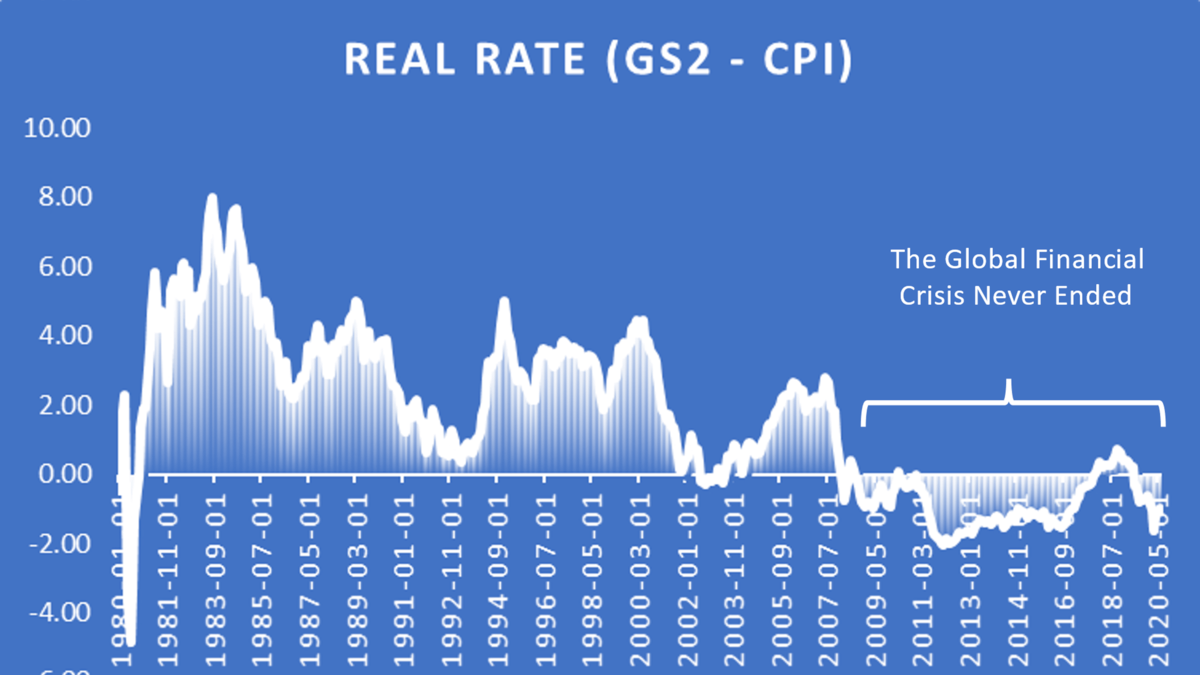 Graph: while tedious in themselves, economic statistics tell a story. The Real Rate, the interest rate set by the Federal Reserve less the rate of inflation, went strongly negative in 2008 and has stayed there through today. This is a crisis rate intended to support the financial system that was alleged to have been saved in 2009. While bank profits were quickly restored during the crisis, government support to stabilize Wall Street never ended. Through maintaining a crisis-level Real Rate, the powers-that-be are implying that the crisis never ended. Source: St. Louis Federal Reserve.

Without addressing the factors that are driving this permanent crisis— 1) the extractive grip that finance has on political economy, 2) economic concentration that has morphed into full-blown oligarchy, and 3) class relations that are being managed by politicians for the benefit of Wall Street and the oligarchs, the crises will continue to get deeper— and the bailouts larger, until an inflection point is reached. The unwillingness of the PMC and the political class to confront these factors explains why political repression is on the rise. The oligarchs and the PMC see themselves as blameless. What follows is that the polity is ‘the problem.’ 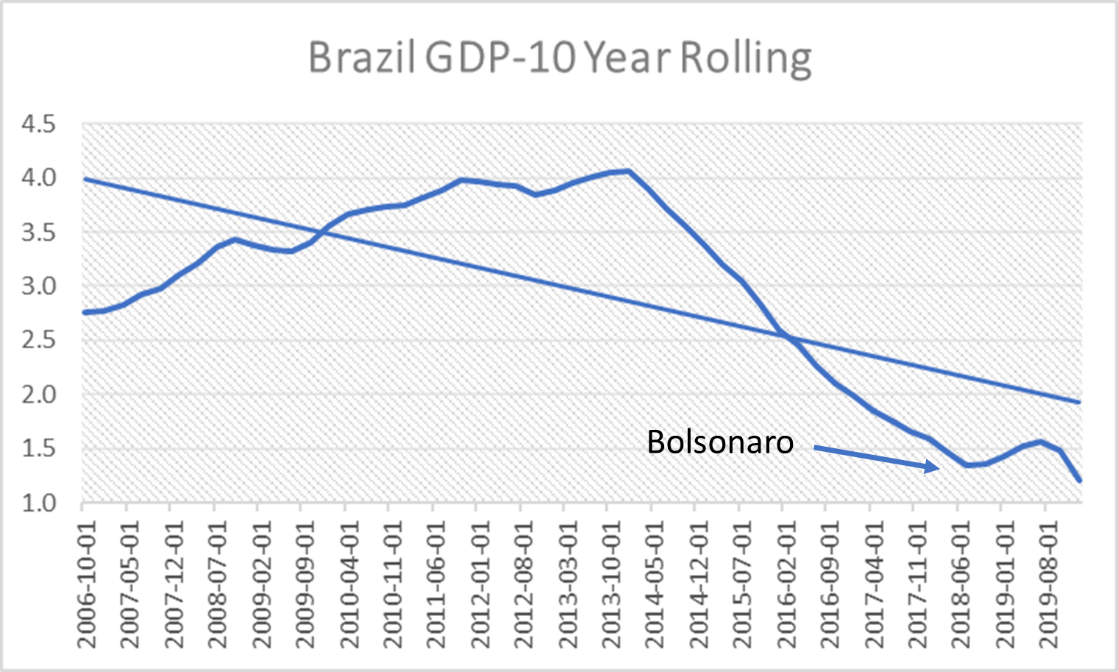 Graph: the wildly delusional post-2016 political discourse in the U.S. can be given broader context through the economic conditions that led to the election of Jair Bolsonaro in 2018. While theories abound purporting to explain Mr. Bolsonaro’s election following six years of social democratic governance, the commodity-induced crash of the Brazilian economy that was underway goes far in explaining popular frustration with the liberal government. Units are 10 year rolling percentage change in GDP, the same as for the U.S. data in the other graphs. Source: St. Louis Federal Reserve.

Where this leaves the U.S. is that the national Democrats’ economic proposals, even when taken at face value, 1) proceed from within the political economy that caused the 2008 crisis, 2) are designed to perpetuate the neoliberal policies that caused the crisis and 3) are destined to be inadequate due to this already existing crisis. In other words, the structural adjustments sure to be produced if the pandemic renders whole classes of business inviable, e.g. restaurants, bars, and gyms, will take place within the ongoing crisis of neoliberalism.

The fact that $1 trillion of the first $4 trillion of pandemic relief went into the pockets of the richest one percent of the population offers insight into the nature of the problem. To be clear, the money wasn’t paid directly by the Federal government to the rich. The Federal government and the Federal Reserve dedicated large-scale funding to reviving financial asset prices, the rich own nearly all financial assets, therefore the effort to raise financial asset prices disproportionately benefited the already rich. The point: the structural forces that are now in place assure that this skewed distribution will continue.

Saving Wall Street restored the fortunes of the oligarchs, the executive class, and workers on Wall Street, but it left behind an extractive and predatory economic system that wasn’t working for the bottom two-thirds of the class distribution before the Covid-19 pandemic struck. This tiny oligarchy of inherited wealth and self-enriched corporate executives is matched from below by a the low-wage, no benefit, perpetually tenuous, gig economy that now leaves twenty million workers displaced by the pandemic.

Mainstream and leftish economists point to the low unemployment rate and rising wages in the lower tiers of the labor market as evidence that the economy had fully recovered before the Covid-19 pandemic struck. The question then is why one trillion of the four trillion dollars in pandemic relief spending that was dumped into ‘the economy’ found its way into the pockets of a few dozen billionaires? Again, there was no direct transfer— the point is structural. If you don’t see this as evidence of deep structural flaws in the U.S. economy, we have a difference of opinion.

The implied premise that motivated Barack Obama in 2009 was that restoring Wall Street would restore the economy that preceded the economic collapse. But the economy that preceded the crash was already a neoliberal gut-job, plus finance. By the end of Mr. Obama’s second term, only the rich and PMC had recovered. The back-and-forth over what motivated the election of Donald Trump, Nazis versus populism, misses that the hangover from the serial neoliberal catastrophes that culminated in the Great Recession tie in time and geography to political unrest around the globe.

To tie this together, the economic backdrop in which the Covid-19 pandemic arrived was not working for most people. Economists can use their favored metrics to argue this any way that they care to, but rising political instability ties in time, place, and political theory to ongoing economic crisis. The Biden government is deeply tied to both the neoliberal program in general, and Wall Street in particular, at this point of profound social need. There is no way in this context to serve multiple masters and still produce actual solutions. Mr. Biden’s decision to double down on Obamacare is direct evidence that serving multiple masters is the plan.