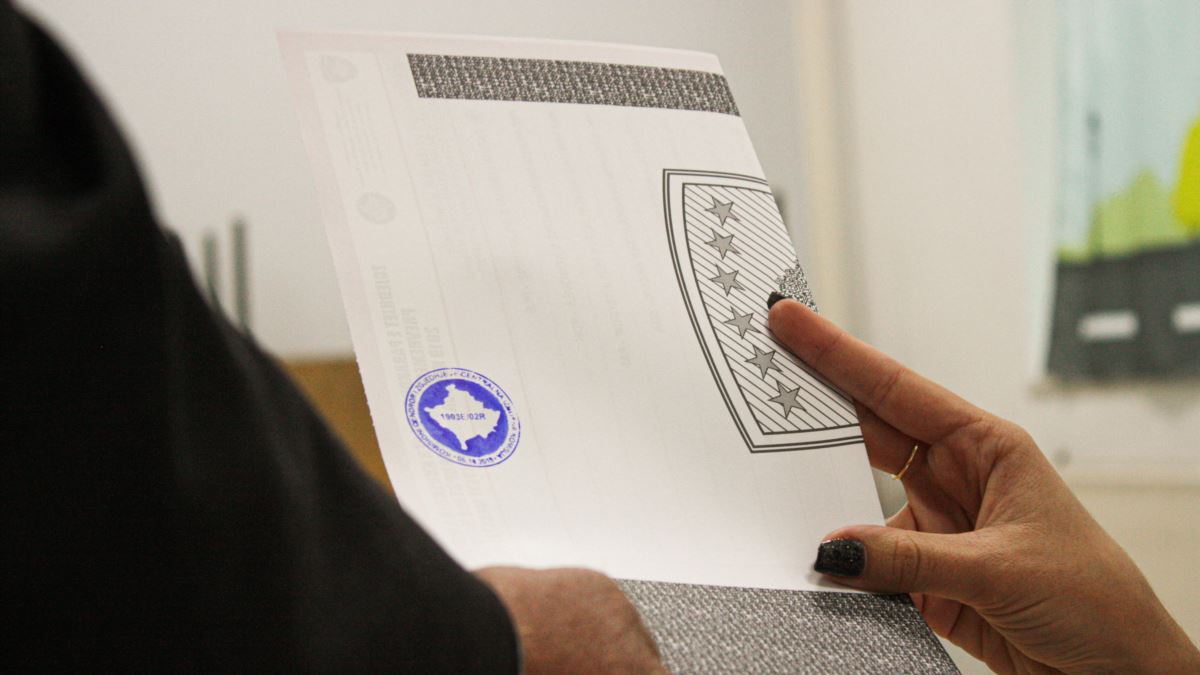 Born and raised in New York City, Valentina Duhanaj is a newcomer to Kosovo’s elections.

But she’s no stranger to the country, its culture, or its politics.

Both of Duhanaj’s parents and three of her siblings were born there, and she visits her extended family in their landlocked Balkan homeland. She’s also spent much of the past decade focused on Kosovar and Balkan politics in college and graduate school as she studies for a master’s degree in global affairs.

Duhanaj, a 30-year-old with just U.S. citizenship, expects to vote in the Kosovar elections for the first time on February 14 thanks to the inclusiveness enshrined in that mostly ethnic Albanian country’s election law and its constitution.

“I started seeing chatter on Albanian Twitter with many friends and Kosovar politicians mentioning that children of Kosovar citizens could vote if they could prove at least one of their parents were born in Kosova, so I decided I wanted to,” Duhanaj told RFE/RL.

Kosovo’s law on citizenship — part of the path to voting — extends citizenship to former Yugoslav citizens and residents in January 1998 and their “direct descendants,” regardless of where they live.

But an unusual strategy of screening would-be voters by telephone threatened to upset Duhanaj’s and the efforts of tens of thousands of other Kosovars in the diaspora to collect on that democratic promise.

No Shortage Of Problems

There are other, arguably more conspicuous, challenges piling up ahead of these snap elections in Europe’s newest independent state.

They include conducting mostly in-person voting in a pandemic that has already frayed governments throughout Europe and the region.

Add to that the long shadow of alleged wartime atrocities that has been cast on former influential leaders, at least one candidate, and the national conscience.

And, more unexpectedly, the problems include ensuring a fair and competitive vote after the Central Election Commission last week signaled the likely disqualification of three party lists over prior criminal convictions against several dozen candidates — including the front-running Self-Determination (Vetevendosje) party’s choice for prime minister, Albin Kurti.

Whatever the outcome of opposition appeals that are still pending, critics are sure to attack the resulting vote as rigged and will possibly boycott.

But to some of the hundreds of thousands of people who fled the former province during and since a battle for independence from the Yugoslav constituent republic of Serbia in the late 1990s and their descendants, it won’t matter who’s on the ballot if they can’t even register to vote.

After acting President Vjosa Osmani scheduled next month’s snap national elections to replace a government declared illegitimate by the courts, the Central Election Commission on January 11 gave Kosovars outside the country just 10 days to register to vote.

A day later, the commission added a key verification step to the process: voter registrars must telephone such applicants abroad to confirm their identities and other details before registering them.

Duhanaj was “skeptical of the commission’s motives,” she said, in part because she heard lots of criticism of that decision among Kosovars on social media. Plus, she said, it simply seemed “anti-democratic that a diaspora member’s application can be tossed out if they simply miss a call.”

“It’s not that this process takes so much time, so much as missing this call seems to be a disqualifying factor for the application process,” Duhanaj said.

Central Election Commission (CEC) Chairwoman Valdete Daka suggested that officials would call just three times. “The CEC will verify the application process for registration by contacting all applicants by telephone,” the commission said in its decision. “If the applicant is not notified by phone, then his application is rejected.”

Osmani quickly urged the commission to reconsider the phone-call requirement as risking a “flagrant violation” of the right to vote.

Liza Gashi, a former deputy foreign minister of Kosovo who also founded an umbrella NGO for the Kosovar diaspora, called it an attempt “to suppress the vote from abroad.”

Her former NGO, Germin, filed a complaint with the Election Panel for Complaints and Appeals (ECAP) alleging that the commission’s decision contravenes four articles of the Kosovar Constitution, the national election law, and the Election Commission’s own guidelines.

After the ECAP rejected its petition, Germin on January 15 appealed to Kosovo’s Supreme Court to strike down the requirement.

Lots Of Work To Be Done

Kosovo’s population is about 1.9 million.

And in a small, partly recognized country with around one-third of its population abroad, even tens of thousands of potential expat voters can easily swing an election.

Support among the diaspora was thought to have helped swing the 2019 election for Kurti’s Albanian nationalist Self-Determination party, upsetting more than a decade of political dominance by former guerrillas of Kosovo’s war of independence in the late 1990s.

Now, polls suggest Self-Determination is the front-runner heading into the February vote and the diaspora could once again prove decisive.

Any eventual government will immediately face the ongoing challenges of an unprecedented public-health crisis caused by COVID-19, a looming presidential vote in parliament, and economic malaise that predated the pandemic but has been exacerbated by it.

It must also confront brain drain and other demographic challenges stemming from decades of emigration, and potentially divisive fallout from expected war crimes trials in The Hague of prominent Kosovar leaders, including ex-President Hashim Thaci.

Washington and Brussels will meanwhile expect Pristina to provide new momentum to internationally mediated talks on normalizing relations with powerful neighbor Serbia, which still refuses to recognize the 2008 declaration of sovereignty by its former province.

And as Osmani — who could be poised to compete for the presidency — has already signaled, Pristina will be eager to seed relations with one of Kosovo’s staunchest allies, the United States, as President Joe Biden’s new administration gets out of the blocks.

Its authorities estimate that around 800,000 Kosovars live abroad, many of them unregistered.

The NGO Germin has complained for years that officials need to do more to “overcome obstacles and to widen the possibilities for out-of-country voting.”

Some critics would argue that the conditions for Kosovars to vote abroad were already tight enough.

Prizren-born Kosovar Hilmi Gashi has lived in Switzerland for 32 years and has always tried to vote.

Twice, however, he was prevented from voting.

After his complaints to ECAP went unanswered, he traveled to his homeland to ensure he could cast a ballot in the 2019 elections.

Since then, in December, the Constitutional Court overturned a decision by the country’s Supreme Court that would have ensured that ballots sent by mail from abroad would be counted even if they arrived after the deadline.

In this vote’s case, that’s February 12. Strict adherence to such a preelection-day deadline could especially be a problem for voters in neighboring Serbia, whose postal service doesn’t formally cooperate with Kosovo’s due to Belgrade’s ongoing refusal to recognize Kosovar sovereignty.

Gashi says he’s critical of the process this time, too. “It’s incomprehensible that they make deadlines so short and expect people to apply on time,” he told RFE/RL’s Balkan Service. “[Or] people apply on time but the documentation gets to them too late.”

In Switzerland, he said, many employers prohibit people from using their personal mobile phones at work. “My sister, who works at a company, hands over the phone in the morning at 6 a.m. in the changing room,” Gashi said. “She has no access to the phone all day.”

An organizer of Kosovars in Germany, teacher Muhamet Idrizi, said he was similarly unable to use his phone if the commission called during work hours. “It’s not clear here whether I can then contact the CEC and tell them, ‘You called me, but I couldn’t [pick up the phone], but can you verify my right [to vote]?”

Back in New York, Duhanaj got her phone call around midday five days after applying, although she’d been prepared for the worst because of the time difference. “I was also worried they would call in the middle of the night so I kept my phone on loud, as I am six hours behind [Kosovo’s time] on [my] Eastern Standard Time [zone in New York City],” she said.

In the end, she added that the process “was only a slight inconvenience” and was perhaps aided by the fact that she was working from home due to the pandemic. Once a registrar employee reached her, it took only about a minute and a few perfunctory questions to satisfy the verification process.

When she last was in contact with RFE/RL, the day after the voter-abroad deadline and less than four weeks ahead of the elections, she said her other family members were still waiting for their e-mails and phone calls so they could take part in the elections.

And she was still “slightly skeptical” of the process.

“It worries me that thousands of phone calls will need to be made,” she e-mailed RFE/RL, adding: “I am [also] waiting to see what the actual ballot process is like. I have not yet received a ballot and could not find it online, not sure when it will be available.”