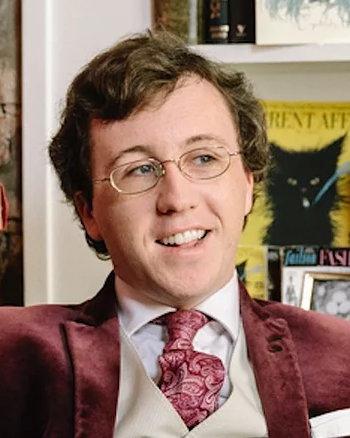 The Guardian has fired one of its columnists for its US edition, Nathan Robinson, because Robinson jokingly tweeted about US military aid to Israel. The Guardian’s US editor-in-chief, John Mulholland, charged Robinson with spreading “fake news.” Worse, Mulholland suggested that his columnist was promoting antisemitic tropes about Israel’s influence on the US government.

In a since-deleted tweet (12/23/20), Robinson had written, in response to the $500 million in military aid for Israel in the spending that included Covid relief:

Did you know that the US Congress is not actually allowed to authorize any new spending unless a portion of it is directed toward buying weapons for Israel? It’s the law.

Lest anyone fail to recognize this as typical Twitter sarcasm, Robinson immediately appended a clarification: “or if not actually the written law then so ingrained in political custom as to functionally be indistinguishable from law.”

Later that day, Robinson received a note from Mulholland, whom he had never before heard from. (Robinson revealed his communication with Mulholland and wrote about his firing in Current Affairs—2/10/21—the socialist magazine Robinson edits.) Mulholland insisted that, “given that no such law exists,” the tweet was “fake news”—”irrespective of the later tweet when you say that it is ‘indistinguishable from law.'” And he went on to link Robinson to antisemitic conspiracy theories:

Given the reckless talk over the past year—and beyond—of how mythical “Jewish groups/alliances” yield power over all forms of public life, I am not clear how this is helpful to public discourse. 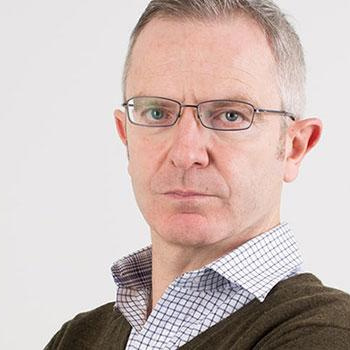 Mulholland also complained that Robinson’s remark on Twitter—a medium that limits its contributors to 280 characters at a time—did not explore the question of aid to Israel more deeply, with a cross-national historical perspective:

I am not sure why singling out financial aid to Israel in a tweet and devoid of any context—and without mention of aid to other countries either currently or historically—is a useful addition to public discourse.

“It dismays me that someone who presents themselves as a Guardian columnist would make such a clearly erroneous statement without…any context/justification,” Mulholland concluded.

It’s not a particularly persuasive critique, but as Mulholland was his boss, Robinson deleted his tweet and promised to be more careful in the future. “I greatly appreciate your thoughtful response,” Mulholland replied—but it was soon made clear that the Guardian would be publishing no more of Robinson’s columns, and that the tweet, deleted or not, was the reason.

Robinson joins the ranks of journalists and intellectuals who have been “canceled” because of their criticism of Israel. Notable subjects include professor Marc Lamont Hill losing his job at CNN (11/30/18) and Steven Salaita having a job offer rescinded by the University of Illinois (Chicago Tribune, 11/12/15).

Beyond the flagrant abuse of the charge of antisemitism against any criticism of Israel (which in this case was actually a joke about US spending on Israeli arms), the incident raises a troubling question about the Guardian. When high-speed internet access became more prevalent at the dawn of the new millennium, English-language outlets outside the United States became go-to sources for left-leaning readers frustrated by the pro-Israeli and pro-US bias in US Middle East coverage (FAIR.org, 1/1/01; 1/28/11; 4/19/12). The websites of the BBC, the Guardian and the Israeli newspaper Ha’aretz have, in recent decades, become important sources for broader coverage of Israel/Palestine.

The Guardian, like the Independent, has been considered one of Britain’s left-of-center publications, favored by Labour Party voters. The Guardian formalized its US online edition 10 years ago (Guardian, 9/14/11). 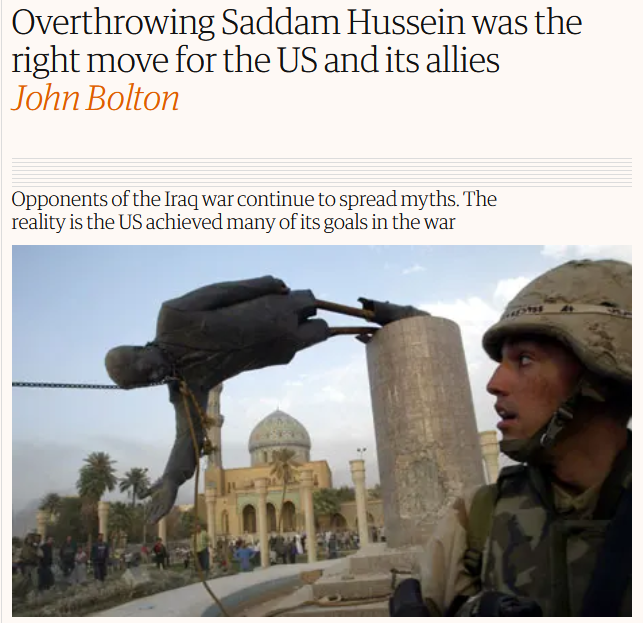 The kind of thing the Guardian (2/26/13) is not embarrassed to run, apparently.

Of course, the Guardian’s storied anti-imperialism in the Middle East is sometimes rooted in more myth than fact: The paper (1/18/03) championed US and British-led military action in Iraq and even gave John Bolton, a prominent hawk in both the Bush and Trump administrations, space to look back approvingly on the war (2/26/13). The author page for former Prime Minister Tony Blair, who led the nation into the war and moved the Labour Party sharply rightward, has 75 articles.

At the same time, pro-Israel outlets have accused the Guardian of having an anti-Israel bias (Jewish Journal, 12/4/03; Algemeiner, 7/23/20). Pro-Israel media watchdogs like CAMERA and Honest Reporting have catalogued what they describe as a pro-Palestinian slant in both opinion and news coverage at the Guardian.

Naomi Wimborne-Idrissi, media officer for Britain’s Jewish Voice for Labour, told FAIR that the group has seen a steady decline in the paper’s Middle East coverage, most recently with what the group saw as a downplaying of the Israeli human rights group B’Tselem’s statement that Israel is, indeed, an apartheid state.  The Guardian’s editorial (1/17/21) on the subject “was of the mealy-mouthed ‘on the one hand on the other hand’ variety,” she said:

It was left to Middle East Eye (1/14/21), one of very few independent platforms in the UK with the courage to allow open expressions of a radical, anti-colonial perspective on Israel/Palestine, to highlight the significance of B’Tselem’s work.

She pointed out that the Guardian’s opinion pieces “have in recent years become virtually closed to advocates for Palestine,” while pro-Israel “lobbyists seem to have free rein”:

The choice in October 2016 of the Israeli Ambassador to author its commemoration of 80 years since the battle of Cable Street (Guardian, 10/6/16), comparing the threat of fascism in the 1930s with that of “left-wing antisemitism” now, was the last straw for me as a life-long Guardian reader.

Wimborne-Idrissi argued that this trend mirrored the paper’s negative slant against former Labour leader Jeremy Corbyn, as he fought accusations from the party’s centrist faction that he allowed antisemitism to fester in the party:

Influential columnist Jonathan Freedland, executive editor for a time, has played a huge role in pushing forward the anti-Corbyn agenda. Editor-in-chief Katherine Viner, despite evidence of past pro-Palestinian sympathies, has done nothing to rein in attacks on the left, including on Jewish critics of Israel who have attempted in vain to generate discussion about the so-called IHRA definition of antisemitism. The definition conflates criticism of Israel with antisemitism, and is being aggressively deployed to close down expressions of support for Palestine.

Current political correspondent in the Westminster lobby team is Jessica Elgot, who joined the Guardian in 2015, having cut her teeth at the Jewish Chronicle, authoring many an attack on the Labour left under Corbyn. In her current role, she has continued her enthusiastic support for the smear campaign. A feature of her coverage has been to quote uncritically (Guardian, 3/8/18) from right-wing zealots with a clear anti-Palestinian—some might say Islamophobic—agenda, such as David Collier (understood to be part of the @gnasherjew collective on Twitter) and Joe Glasman of the misnamed Campaign Against Antisemitism. The latter caused consternation by responding to Corbyn’s defeat in the 2019 general election with a video celebrating how the CAA’s “spies and intel” had “slain the beast.” 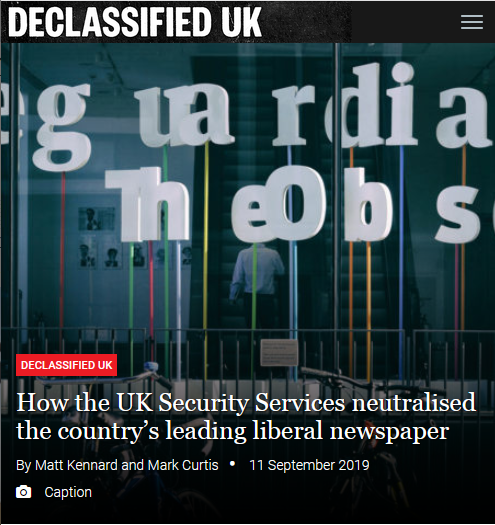 Declassified UK (9/11/19): “The Guardian, Britain’s leading liberal newspaper with a global reputation for independent and critical journalism, has been successfully targeted by security agencies to neutralize its adversarial reporting of the ‘security state.’”

A lengthy investigation by DeclassifiedUK and the Daily Maverick (9/11/19) noted that after the Guardian (6/11/13) revealed Edward Snowden’s leaks about National Security Agency surveillance, the paper’s investigatory abilities in regard to state security operations became compromised. It said that at the time of the leaks, “Guardian editor Alan Rusbridger withstood intense pressure not to publish some of the Snowden revelations.” However, in March 2015, “the situation changed when the Guardian appointed a new editor, Katharine Viner, who had less experience than Rusbridger of dealing with the security services.” The investigation pointed out that Viner previously worked at the

fashion and entertainment magazine Cosmopolitan and had no history in national security reporting. According to insiders, she showed much less leadership during the Snowden affair.

Justin Schlosberg, a senior lecturer in journalism and media at the University of London, echoes this in a chapter in a forthcoming book about the paper: “Following the aftermath of the Snowden revelations, the Guardian’s relationship with the security state began to look increasingly more cooperative than antagonistic,” he wrote, adding that “between 2016 and 2019, the paper was awarded three ‘exclusives’ with spy agency and counter-terror chiefs,” which were “largely devoid of the kind of interrogative scrutiny characteristic of the Rusbridger era.”

At the same time, Schlosberg noted, the paper moved to the right during the years Corbyn led the Labour Party (2015–20). “On the whole, comment pieces were aggressively hostile towards the Corbyn leadership,” Schlosberg wrote, and “the selection of issues and sources in news coverage overwhelmingly favored the accounts and agendas of Corbyn’s detractors.”

For some of the Guardian’s critics, this editorial switch can be felt today in much of its coverage and commentary of the Labour Party and in the Middle East. And that decline matters, because the Guardian has long been seen as providing much needed nuance and broader reporting to the US newspaper market, and as a direly needed alternative to a British newspaper market that is dominated by nationalistic, Tory-aligned tabloids. Robinson’s firing is just the latest example of what these critics have seen for a while.

“What this shows is that even at the Guardian, the editors want to very tightly police what writers say on Israel/Palestine,” Robinson told FAIR, adding that its editors “want to make sure the criticism is carefully approved and stays only within certain bounds.”

Of course the paper has published criticism of Israel, Robinson said, but he noted, “It has also shown that it is willing to cede ground to those who treat legitimate criticisms of the country’s policies as bigoted.”

FAIR published an open letter (2/18/21) to the Guardian‘s John Mulholland calling on him to reinstate Nathan Robinson as a columnist. You can write to Mulholland at john.mulholland@theguardian.com  or via Twitter: @jnmulholland. Remember that respectful communication is the most effective.