Why did Robert Aaron Long kill six Asian women, in three Atlanta-area massage parlors, as well as two other people who happened to be on the premises?

If you are Long, a stringently devout white Christian evangelical, she is, most saliently, Satan’s model helpmeet, shaped to seduce men into sin. Weakened in body and soul by “sex addiction,” in his telling, he was easy prey. He could not resist the succubi — aka his own desire — so he was compelled to commit one mortal sin to prevent another: murder to defeat fornication.

Long’s church, the Crabapple First Baptist Church, in Milton, Georgia, doesn’t buy the addiction defense. “The women that he solicited for sexual acts are not responsible for his perverse sexual desires nor do they bear any blame in these murders,” reads a statement the church released after Long’s arrest. “These actions are the result of a sinful heart and depraved mind for which Aaron is completely responsible.” In a Q&A, it adds: “We repudiate any and all forms of misogyny and racism.”

Well, not quite. Crabapple is affiliated with the Founders Ministries, a rightward-pushing caucus of the Southern Baptist Convention, which condemns the idea of white fragility as “racist” and preaches masculine dominion over women. Much quoted is the New Testament book 1 Corinthians: “The head of every man is Christ, the head of a wife is her husband, and the head of Christ is God.” In other words, Long’s church repudiates all forms of misogyny and racism except the forms repudiated by feminists and movements for racial equality.

While outwardly decrying abuse, extreme religiosity may breed it. In a sample of first-year students at a southern U.S. university, researchers found “significant relationships between religiosity and victims of child sexual abuse by both relatives and non-relatives. Persons sexually abused by a relative were much more likely to be affiliated with fundamental Protestant religions.” A 2006 study of religiosity among Australian men incarcerated for serious sex offenses discovered that those who maintained religious involvement from childhood to adulthood had more sexual offense convictions, more victims, and younger victims than other groups, including atheists. Among Jewish men in an Israeli prison, “religious Jews … were more likely to be in for sex crimes,” according to other research.

Sex, of course, is a moral issue. But the relationship between religion and sexual morality, or between religious morality and sexual deviance, is a confounded one. Evangelical pastors who condemn homosexuality or abortion as abominations against God may point to a physical disease such as AIDS or Covid-19 as God’s retribution. So sometimes they hold sexual sin responsible for the sickness: The wages of homosexuality is HIV. And sometimes the sin is the sickness: homosexuality.

Either way, the conflation is not unique to Christians. Beginning at the turn of the 20th century, Western science has “medicalized” social deviance, redefining drunkenness as alcoholism or sex acts between men as the problematic “abnormality” of homosexuality — turning “badness to sickness,” as Peter Conrad and Joseph W. Schneider put it in 1980. Treatment may replace punishment, or treatment can become a form of social control and punishment. When secular moralists exonerate a behavior — say, remove homosexuality from the Diagnostic and Statistical Manual, commonly called the “bible” of psychiatry — Christian practitioners often take up the slack. “Gay conversion therapy,” a “cure” for queerness, is now plied almost exclusively by religious counselors and psychologists, including HopeQuest, the evangelical treatment facility Long checked into.

Criminality used to be considered a congenital disease to which certain races and ethnicities were prone. The holdover from that ideology is “sex offending,” a psychopathology whose only symptom is having committed a sexual offense. The legal mandates that convicted “sex offenders” attend treatment, sometimes for years, even though they’re considered incurable echoes Calvinist Protestantism, which requires a life of moral discipline despite the fact that God has preordained who goes to heaven and who is damned to hell.

Sex and pornography “addictions” slip between morality and medicine.

And, logically, those most likely to self-diagnose their behavior as sick are those who feel that pornography viewing and nonmarital sex are sicknesses of the spirit. “Religiosity and moral disapproval of pornography use were robust predictors of perceived addiction to Internet pornography while being unrelated to actual levels of use among pornography,” psychologist Joshua B. Grubbs and colleagues found in two studies; their article is titled “Transgression as Addiction.” The level of pornography use among white evangelicals is comparatively low, but their misery about it is far greater than the misery of other users, according to University of Oklahoma sociologist Samuel Perry, who collaborated on a survey of porn in the lives of Christians of different denominations.

Proven or not, there is no end of treatment available to the self-diagnosed sex addict both inside and outside the evangelical world. Since therapist, author, and psycho-entrepreneur Patrick J. Carnes popularized the notion in the early 1980s, it’s been embraced by a recovery industry perpetually augmenting the list of things and activities you can be addicted to, and thus treated for. Today, Carnes’s International Institute for Trauma and Addiction Professionals offers training programs, recommendations, webinars, publications, and certifications. IITAP’s Certified Sex Addiction Therapist course costs $5,910; it’s a bit less for “early birds.”

Even if a provider does not advertise as “Christ-centered,” virtually all recovery treatment contains a tinge of religiosity. That’s because the field is dominated by the Alcoholics Anonymous 12-step model, the first steps of which involve turning your “will and life over to the care of God.” It was many years after AA’s founding in 1938 that some disgruntled atheist added, “as we understand God.” 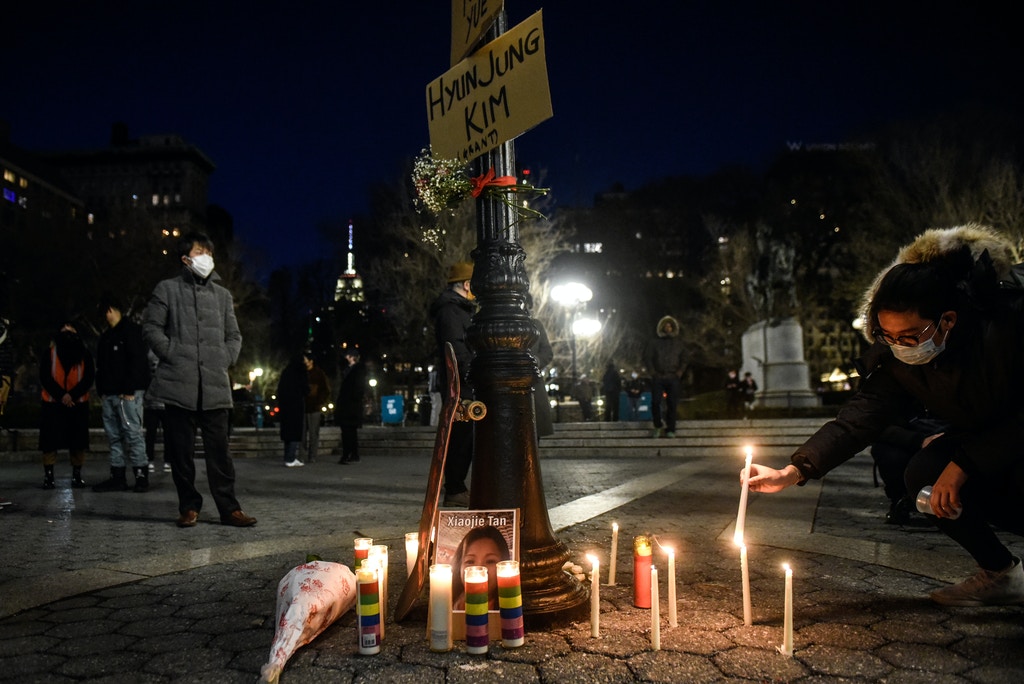 A person lights candles during a peace vigil to honor victims of attacks on Asians on March 19, 2021 in Union Square Park in New York City.

When he could not remain abstinent, he checked himself into HopeQuest, “a family of ministries,” and “the Christian rehab center where people use God to help writer new chapters called Hope and Freedom.” HopeQuest, on 18 acres in Woodstock, Georgia, offers a three-month residential program, transitional housing and outpatient counseling, support groups, training, and consulting. The residency costs $15,000, according to one reviewer, who also describes the grungy accommodations and bad food. On the same review site, the center responds that everyone gets financial support. Along with insurance and subsidies solicited by its fundraiser, HopeQuest has a generous donor on high: “God gave us” the houses, the woods, the program — everything — as CEO Troy Haas tells it in a video.

At HopeQuest, pornography is a pathogen, sin is illness, and worship is essential medicine.

For masseuses trying to make a living without losing their lives, the grace bestowed by the Crabapple First Baptist Church is little protection. There’s scant hope of returning to obscurity either, and not just because a mad shooter brought the world to peep through their curtains. They were already targeted for unemployment — er, “rescue” — by Street Grace, a “faith-based” anti-trafficking organization. In 2020, the group identified 165 “illicit massage businesses” in Georgia, most of them clustered around Atlanta, and deployed surveillance cameras and online reviews to estimate demand and income. Along with maps and graphs, Street Grace’s report on the “industry” includes five pages of recommended licensing, operational codes, and enforcement, as well as samples of some of the more draconian state regulations of massage businesses. The organization describes its goal as “the eradication of the commercial sexual exploitation of children,” but there’s no evidence that any of these establishments exploits minors. The youngest spa worker among Long’s victims was 44, the oldest 74.

As for Long, although his church has expelled him, he’ll find plenty of spiritual guidance behind bars. In “God in Captivity: The Rise of Faith-Based Prison Ministries in the Age of Mass Incarceration,” author Tanya Erzen estimates that “nondenominational Protestant Christians make up more than 85 percent of the volunteers who enter the prison” in many states, particularly in the South, as political opposition and funding cuts decimate secular rehabilitative and educational programs for the incarcerated. Locked up in a violent, racist institution, with nothing but homophobic, misogynist, and radically sectarian religion for succor, Long will not be cured of his sickness unto death — the death, that is, of Soon Chung Park, Hyun Jung Grant, Suncha Kim, Yong Yue, Xiaojie Tan, Daoyou Feng, Delaina Ashley Yaun, and Paul Andre Michels.