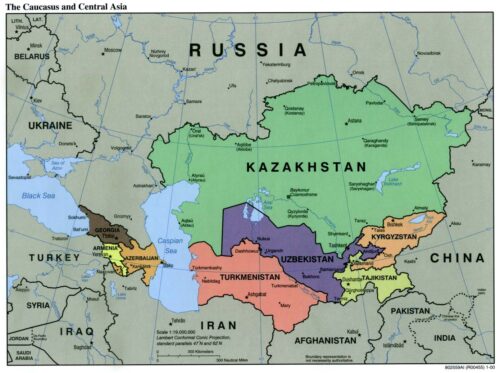 Kazakhstan reminds of Armenia (September 2015), also energy price increases, Georgia (April 2009), opposition attempting to force pro-Russian President Mikheil Saakashvili, from power; and even to some extent of Ukraine (2014) – Maiden riots supposedly because then President Viktor Yanukovych, lured into negotiations with Europe for an association agreement with the European Union, behind which was – who else – NATO. The majority of Ukrainians had no idea about these ongoing negotiations and their background. So, the riots were planned by long hand and had nothing to do with the short-cut EU negotiations. Talks were eventually interrupted when Yanukovych received assurances from Russia for a “better deal”.

That’s when hell broke out on 21 February 2014 and the Maidan massacre took place. Its violent destruction was disproportionate to the cause. Western hired mercenaries were behind the merciless killing. The Maidan massacre murdered some 130 people, including some 18 policemen. That’s when it became clear – another Color Revolution was being instigated by the west – and always, but always with NATO in the back.  NATO’s goal was setting up one or several bases in Ukraine, the closer to Moscow, the better.

Just for the record, the 1991 agreement between Europe and the new Russia, stipulated that there would be no new NATO bases further to the east (of Berlin), was never respected by the west. That’s why President Putin is drawing red lines, and rightly so.

Perhaps, one of the first such Color Revolutions in recent history was Serbia, when in early 2000 Serbian youth chanted “Slobo, Save Serbia! Slobo Save Serbia!”. Later that year, a “reform-minded” foreign-funded and trained group of young people infiltrated the Serbian pro-Milosevic youth and brought Milosevic, the president loved by most Serbs, to fall in October 2000. He was arrested immediately shipped to the ICC prison in The Hague, where he awaited trial for highest treason and crimes against humanity, which he did not commit.

His lawyers accumulated enough proof for Milosevic to demonstrate that the west was behind this Color Revolution and, indeed, the total dismantling of former Yugoslavia. If these documents would become known to the Court, the ICC, one of the most important interferences and destruction of a country in recent history would shed an irrevocable light on the crimes of the west, at that time led by President Clinton et al. So, Milosevic had to be “neutralized’. On March 11, 2006, he was found dead in his prison cell, a so-called suicide. This, despite the fact that since June 2001, he was on constant suicide watch.

Well, these are the stories of Armenia, Georgia and Serbia, but back to Kazakhstan, which resembles in many details these preceding so-called Color Revolutions. NATO having been unsuccessful under Russia’s strict red line – to advance further toward Moscow in Ukraine, or before in Belarus — is trying now on the southern front, with Kazakhstan.

This is clearly an attempted coup, no longer just protests about a gas price hike. It was engineered by the west – see this interview on the Kazakhstan crisis of Dr. Marcus Papadopoulos with Kevork Almassian (video 46 min. 6 January 2022):

No chance of success with this new coup attempt – just more propaganda for the west. President Putin will never allow these former Soviet republics to slide into the power base of the west, of NATO, especially now, since it is well known that over 90% of the population of all these former Soviet Republics want to stay firmly in Russia’s orbit.

The repeated protest patterns in Serbia, Armenia, Georgia, Belarus, and now in Kazakhstan are clearly indicative of western / NATO pressure to destabilize Russia and, ideally, so they keep dreaming since WWII – bring Russia into the “western influence base” – call it slavehood. In several of these cases the base reason for riots were massive energy price hikes, were just a pretext to heavy violent interference by western mercenaries under the guidance of NATO.

Never to forget NATO is always the power base behind these moves, because the end game is one or several NATO bases in the countries they are trying to putsch. Yet, it doesn’t seem to be very smart, as the west ought to know that none of these former Soviet Republics will betray Russia – almost all the people, including all the higher-level politicians, want to remain firmly in Russia’s zone of influence. Kiev was an exception. Kiev since WWII has been a Nazi stronghold, something that doesn’t apply to the rest of Ukraine.

In Kazakhstan, after what appears as local rather peaceful riots, violent elements were introduced from “outside”, in the form of well-trained almost para-military protesters, out to kill. It is what has become known as an attempted “Color Revolution”.

In Kazakhstan the death toll far exceeds 30, including 18 policemen, at least two of whom were decapitated. Hundreds have been injured. While according to Kazakh President Tokayev, constitutional order was largely restored last Friday, 7 January, unrest continues and nearly 4000 people were arrested. The extreme violence took over government buildings and burnt them down; the airport was occupied. The level of violence was way disproportionate for a gas price hike. Clearly other motives are at stake.

The vast majority of the 19 million Kazakhs have not taken to the streets, because of the gas price increase, which was not as dramatic as the western main stream media has you believe. The majority lives in rural areas and avoids violence.

These latest Kazakh upheavals could also be called a below-the-belt NATO approach to destabilize Russia, since NATO seems to have failed in Ukraine. In other words, undermining Russia’s position on Ukraine.

Russian President Vladimir Putin held talks with member states of the Collective Security Treaty Organization (CSTO) on Friday. Peacekeepers from Armenia, Belarus, Kyrgyzstan, Russia, and Tajikistan were deployed to Kazakhstan earlier last week. President Tokayev was saying they would stay “for a limited period of time” to support the local security forces. Indeed, this morning, January 11, President Tokayev has declared the CSTO mission completed and is discussing with the troops their repatriation.

Russia’s Ministry of Defense later clarified that the CSTO forces have also been tasked with the protection of important facilities and key infrastructure and were not supposed to participate in “operational and combat” activities.

The EU, a typical undecided hypocritical agent, also offered the bloc’s assistance to help resolve the crisis with several countries calling on both the protesters and government forces to refrain from violence.

Yeah, right: calling on both parties to refrain from violence, when, in fact, the violent element was introduced clearly by NATO members, most of whom are Europeans. Once again, the trustworthiness of Europe is down in the pits. All it will do is appease some ignorant western, mostly European citizen with a massive flood of pro-western propaganda.

The question in the room is why Russian and Kazakh governments’ special services did not foresee this type of “Color Revolution” coming, especially after Russia’s drawing a red line on Ukraine? And after the west had lost her coup attempt in Belarus? Is it possible that the Ukraine distraction – hyped up by the western media with constant threats of a nuclear WWIII scenario – diverted President Putin’s attention from other vulnerable attack areas, such as Kazakhstan? And possibly Belarus? The latter is currently quiet. But to an outside eye, it looks like a temporary calm. And Ukraine is far from over.

As long as Russia is running after the problem, rather than taking an offensive surprise lead, Putin may remain in a defensive bind. Reacting, rather than being pro-active. That’s always a disadvantage and may deserve strategic rethinking.

Just imagine what a pro-active surprise move might be. For example, Russia setting up a military base in Mexico. And why not? Russia would certainly have the stature and standing in terms of friendly relations with Mexico to do so. It would be a game changer. It would put a different spin on world geopolitics. Why not give it a try by starting talks with AMLO, Mr. Lopez Obrador, Mexico’s President.

The west’s / NATO’s intent has been since the 1990s to separate Kazakhstan from the orbit of the former Soviet Union and today’s Russia. So far unsuccessfully, for the reasons pointed out before. Kazakhstan exports 30% to and imports 60% from Russia and China. Today more than ever Kazakhstan is part of the Eurasian alliance. It is a de facto integrated nation and one in close partnership.

In addition to the CSTO troops, Russia also sent air force troops to counter the militants. Chances are that this will not become a new Kiev, where Assistant Foreign Minister Victoria Nuland, so eloquently said “f*ck Europe!” since the US had already spent 10 million dollars over the past years to prepare this coup.….

What we see in Kazakhstan are very well trained and armed militants – not peaceful protesters, as would have been the case when protests started over gas price increases – it is clear that peaceful protesters do not take over government buildings and airports, they do not shoot police officers to kill – this is clearly foreign intervention.

It is amazing – and sad – to watch how Europe plays along, letting NATO troops eventually ravaging the European territory – when Russia interferes. Only brainless European leaders (sic) will allow NATO playing war games that could turn anytime “hot” – hot again on the territories of Europe.

That’s what the European Union has become. She is led by an unelected lady, Madame Ursula von der Leyden, formerly Germany’s Defense Minister, but more importantly and much less visibly, she is a Member of the Board of Trustees of the World Economic Forum. We know who calls the shots over the European Union – and most of the viciously dictatorial leaders (sic) of the EU member countries, stripped of their sovereignty – are scholars from Klaus Schwab’s special courses for “Young Global Leaders”. This also applied for the most covid-tyrannical heads of states around the world.

They shall not prevail.

Back to Kazakhstan. The same people who scare (mostly) the western people to death for a virus that has never been isolated and identified, are also behind destroying Russia and China.

If they were to succeed in Kazakhstan, they would have managed to weaken Russia considerably, and the next step would most likely be NATO’s ignoring Moscow’s red line on Ukraine with the aim of arming Ukraine and making it eventually a NATO country.

This is, however, still unlikely because Putin then would not hesitate invading Ukraine through the Dunbass area, defending Russia’s interests.   NATO and the US know that they have no chance against Russia’s newest defense systems.  Would they let it happen, letting Europe be obliterated for the third time in a bit more than 100 years?

The fight for Kazakhstan, Ukraine, and Belarus is a pivotal strategic chess game.  Undoubtedly Russia will win it, but at what cost for Europe, for Eurasia?  The more severe the covid restrictions the west will impose – and the east will obey – the higher the price for maintaining or regaining sovereign European and Eurasian countries.