A collage of two images is being circulated on social media and linked to the ongoing farmers’ protests. The post claims that Shaheen Bagh protestors have joined the farmers’ movement. Twitter user @rahulpassi shared the collage and wrote, “Gangadhar is actually Shaktimaan.” His tweet has received 1,900 likes and more than 500 retweets as of this writing. (Archive link)

The photos are being shared widely on Facebook as well. A Twitter user tagged Alt News asking about the truth behind the collage. We also received several requests to fact-check the images on our WhatsApp number.

Both the photographs are actually from anti-CAA demonstrations. Alt News had published a fact-check report on the bottom image when it was viral with a false ‘Hathras Wali Bhabhi’ claim. We found that the picture was taken at Shaheen Bagh during anti-CAA protests.

A keyword search on Google had led us to blog where the image was uploaded on September 25. This proved that it cannot be related to the ongoing farmers’ protests. 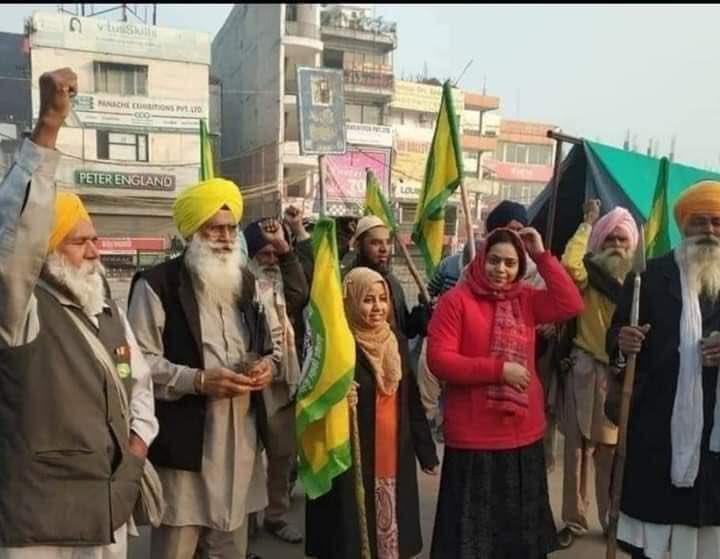 Our detailed fact-checking pinning the location where the picture was shot can be read here.

Furthermore, the image on top was also shot during anti-CAA protests. ‘Shaheen Bagh’ can be seen written on the board behind the crowd. Apart from this, “THE PEOPLE OF INDIA REJECT CAA NPR NRC” appears on another banner in the background. BKU-Bharti Kisan Union Ekta Ugrahan had uploaded the image on March 3.

Therefore, old photos taken during anti-CAA demonstrations at Shaheen Bagh were falsely circulated with the claim that these participants joined the farmers’ protest too. It has been alleged that along with farmers, many outsiders have now become a part of the protests motivated by politics.