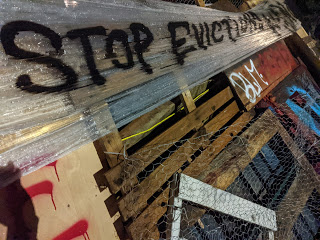 From the time people began to maintain a constant presence in front of the house as part of an effort to prevent the forced eviction of the Kinney family within it, until a few days ago, it was the house and its yard that was being protected.  Then, at 5 am on December 8th — the favorite time of day for these sorts of police attacks — the riot cops moved in, arresting a number of people, including a member of the Kinney family.  Much was made in the police report about multiple firearms being seized in the course of these arrests, of course, with no context provided — that armed fascists are regularly coming by to threaten people, and that the police make sure never to be present when that happens.  For example.  Or that the ownership of firearms is very commonplace in this country, especially lately, across the political spectrum, and is about as surprising as finding a baseball bat or a guitar.

The raid on the Red House on the morning of December 8th will, I believe, go down as a historic miscalculation on the part of Ted Wheeler’s corporate-friendly Democratic Party administration — with its recently-approved, massive police budget — that runs this city in the service of the landlord-stakeholders.  What they have done with this raid is they have massively escalated the conflict, and I sincerely hope, and suspect, that they will soon regret this move.  What they have done now, I believe, is they have taken two movements that were already intimately related, and fused them.  If it was not already completely obvious, now it’s impossible not to see it, the police have made sure of this — if you are in favor of Black lives, you are also against evicting families onto the streets.  And the converse is true as well.

Since the police raid, what was limited to one house is now a neighborhood-wide conflict.  The neighborhood is already very gentrified, and the displeasure among some of the yuppies around Mississippi Avenue that black-clad youth had set up checkpoints on multiple intersections was occasionally being made clear, but only through the aggressive use of car horns, never by people actually getting out of their cars to engage with anyone on a human level, whether out of fear or embarrassment on the part of the horn-happy wine bar set.

After the raid, the police employed a fencing company to erect a tall fence to surround the Red House with.  They apparently were operating under the premise that a tall fence would take care of the problem.  In actuality, the fence they erected turned out to be very useful, but not for the reasons the authorities apparently believed it would be.  What transpired in the hours after they erected the fence, as is easy to observe directly, is the fence was dismantled and reengaged, deployed as part of some suddenly very solid barricade constructions at every intersection surrounding the Red House.  The barricades were set up in such a way that people who lived in other houses in the neighborhood could still access their houses, and mostly also their parking spaces, but they now had to take a much more circuitous route to get onto a main road.  Each barricade has a little entryway that a human — but not a vehicle — can pass through, once the nice, thoroughly masked young person in black who greets you ascertains that you’re probably not a cop or a fascist.

During my time hanging around the neighborhood there last night, many people were engaged in many forms of industrious activity.  If you haven’t spent much time among autonomously-organized youth — whether current youth or the same crowd that existed when I was young, in the 1980’s in New York City — you might not realize that when you enter such patches of liberated territory, whether it’s a mostly outdoor phenomenon like this, or a building takeover, you are entering a hive of activity, reminiscent of a beehive, with everyone engaged in doing their thing, whether they are responsible for cooking, collecting trash, building barricades, constructing tire spikes, collecting wood for the campfires, collecting rocks, or whatever other useful endeavors.  Last night was full of that beehive vibe, with most people fulfilling one role or another, whether self-appointed, or appointed through an affinity group or larger network involved with specific aspects of organizing the things that need to happen when large numbers of people are being somewhere for a while.  Folks need to eat, sleep, and shit, while also seeking to defend the Red House.

While many people were engaged in meetings or carrying out various tasks, the scouts looking for the next inevitable visit from the riot cops, and others involved with guarding the perimeter always have time to talk.  Now, nothing that I’m about to say should come as a surprise to anyone who has spent much time on the ground at protests in Portland over the past eight months or so, but the crowd last night consisted of a very interracial, multigendered and otherwise very intersectional group of mostly young people.  Mostly wearing black — which, incidentally, is not just a political statement, if it even is one, but is a matter of practicality for a variety of reasons.

And what are people talking about in there among the campfires?  I pass by one meeting, noting that most of the participants are people of color.  I recognize the man who is speaking to the group of a dozen or so people.  He spoke at the last rally I sang at, in fact.  As I walk past the discussion, he’s talking about how to be inclusive of people who want to be involved, while still finding effective ways to exclude truly disruptive elements.  I then came upon another couple of folks, who greeted me for the sole reason that I had stopped walking momentarily while in their general area, and we then spontaneously began having a conversation about the history of eviction defense actions across the US in the 1930’s, during the Great Depression.

Back in the 1930’s, all of us radical history buffs hanging around the Red House collectively noted, when the cops came to evict people, they often succeeded, but only temporarily.  After evicting a household, the people would gather together — often in their thousands — to move the family back in, and un-evict them.  That, we all noted, was exactly what was going on at 4406 North Mississippi Avenue.

I believe this struggle, around this particular house, will be won.  I believe it will also set the stage for the much broader struggle to come, in the months after Oregon’s eviction moratorium expires.  But the future is very much unwritten, and there are many more players involved with this deadly game, aside from the barricade-building youth, unfortunately.

So don’t just scroll on to the next article.  Put your phone down, and come meet me at the Red House.