“Reading is freedom,” says Ron Jacobsen. Mr. Jacobsen was recently released on bond after 30 years, but during his decades of wrongful incarceration he said reading provided an escape from the four walls of his prison cell.

“I started working in the library and this opened a whole new world to me — one of education through reading,” he said. Reading became his obsession. He began reading a novel a day, while also reading about the law to try to fight against his wrongful conviction. If he hadn’t become such an avid reader and found “Actual Innocence” by Innocence Project Co-founders Barry Scheck and Peter Neufeld, Mr. Jacobsen said, “I would probably still be inside those prison walls.”

Now home with his sister Gladys, Mr. Jacobsen is still awaiting justice as the district attorney in his case intends to retry him. While he continues this fight, he is enjoying spending time with his sister and the freedom to read whatever he wants, whenever he wants. And he encourages others to pick up a good book, too.

If you’re looking for somewhere to start — or a last minute gift — these are our recommended reads for the year and some staff favorites.

Several books written by wrongly convicted people and people working the justice reform space were published this year, including one co-authored by Yusef Salaam, a member of the Exonerated Five and the Innocence Project’s board of directors. These are some of our top picks from this year’s new releases.

1. “Punching the Air” by Ibi Zoboi and activist Yusef Salaam 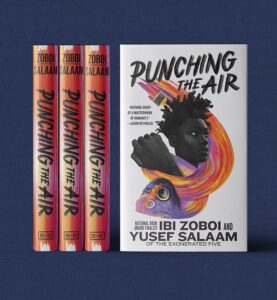 This powerful young adult novel, written in verse, tells the story of a wrongly convicted boy. Ms. Zoboi told NPR, “I write books for children, and I wanted the world to remember that Yusef was a child when this happened to him and I was a child as well.” So she knew the main character in “Punching the Air” “had to be inspired by Yusef and this story had to instill a sense of hope in the reader.”

Innocence Project supporters will receive a free shipping discount when they purchase “Punching the Air” with this link.

2. “When Truth Is All You Have: A Memoir of Faith, Justice, and Freedom for the Wrongly Convicted” by Jim McCloskey and Philip Lerman

In this riveting book, Jim McCloskey, tells the story of how he founded Centurion — formerly Centurion Ministries — an organization committed to investigating incarcerated people’s claims of innocence. Available to purchase here.

3. “Justice for Sale: A Wrongful Conviction, a Broken System, and One Lawyer’s Fight for the Truth” by Jarrett Adams

Jarrett Adams was convicted of a crime he didn’t commit at age 17. He spent eight years wrongly incarcerated and began learning about the legal system. After his exoneration, he attended law school and is now a defense attorney, fighting for justice. In this memoir, expected to be released in April 2021, he shares his inspiring journey. Available to pre-order here.

Send a message of holiday cheer to our recently freed clients

In this non-fiction work, Isabel Wilkerson, a Pulitzer prize-winning journalist and author, examines systemic inequality in the United States. Called an “instant American classic” by the New York Times, the book takes a hard look at the use of violence and oppression throughout history and how that has impacted America as it stands today. Available to purchase here.

“Hands down, ‘Black Futures’ is the coffee table book of the year,” says Alicia Maule, Innocence Project’s director of digital engagement. The book, a 500-page multimedia anthology is a work of art that brought together hundreds of Black creators, activists, chefs and more to answer the question: ‘What does it mean to be Black and alive right now?’ “This is a book you’ll be proud to hold and showcase,” says Mx. Maule. Available to purchase here.

If you’re interested in justice reform and wrongful conviction, these are just a few more must-reads our staff recommends.

6. “Devil in the Grove: Thurgood Marshall, the Groveland Boys, and the Dawn of a New America” by Gilbert King

This Pulitzer Prize winner is a “must-read” recommendation from our new executive director, Christina Swarn. “Devil in the Grove” tells the story of Thurgood Marshall’s defense of four innocent Black teenagers who were tried, convicted, and sentenced to death for the rape of a white woman in Florida in 1949. Available to purchase here.

7. “The Condemnation of Blackness: Race, Crime, and the Making of Modern Urban America” by Khalil Gibran Muhammad

Recommended by our Sarah Chu, our senior advisor on forensic science policy, “The Condemnation of Blackness,” sheds light on how crime statistics and research have been used to create the myth of Black criminality. “This book is important for understanding how deeply the architecture of our criminal legal system is tied to painting Black people as inferior or criminal and shows us how well meaning people were complicit in advancing those false ideas,” Ms. Chu says. Available to purchase here.

8. “Until We Reckon: Violence, Mass Incarceration, and a Road to Repair” by Danielle Sered

Innocence Project Executive Director Christina Swarns recommends “Until We Reckon,” which she calls an “important and fascinating read.” The book considers how draconian sentences often fail to address the needs of survivors of violent crime, and takes a look at approaches to ending mass incarceration that will also increase public safety. Available to purchase here.

Publishing this memoir has been at the top of Albert Woodfox’s list of dreams for many years. But Innocence Project Chief Program Strategy Officer Carine Williams, who represented Mr. Woodfox for eight years, said he was adamant that he would not write while incarcerated.

“He believed the grief and grime of lockdown would corrupt his storytelling. He said, ‘I don’t know how but it’ll get into my words,’” she recalled. Mr. Woodfox was finally freed in 2016, and three years later, he published his memoir. “All I can now say is: It was worth the wait. If Louisiana tried to bury Albert — and they did — this book is a gorgeous bouquet of blooms from the man no one knew was a seed,” Ms. Williams said.

“Solitary” is available to purchase here.

Written by Shoshanah Hobson, the Innocence Project’s very own Events and Special Projects Manager, “Alizah’s Story” is an inspiring children’s book about a third grader who starts to stutter and learns that what makes her different also makes her powerful. Available to purchase here.

Poetry lovers must check out “Never Silent,” written by Innocence Project case management database administrator Valencia Craig. This stunning e-book of poetry touches on themes of race and inequality and is available to purchase here.