An RFE/RL investigation shows the relatives of former Kazakh President Nursultan Nazarbaev have invested nearly $785 million in luxury properties in at least six countries over a 20-year time span.

The investigation, published on December 22, is not a comprehensive accounting of all the real estate investments made by Nazarbaev’s children, grandchildren, in-laws, or other politically connected Kazakh elite, but for the first time attempts to document and value those investments, some of which have drawn media and legal scrutiny over the years or been the source of controversy. 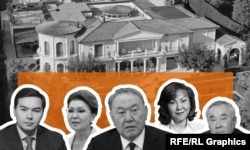 A luxury hillside villa in Cannes, France, figured into a bitter, multiyear lawsuit between Nazarbaev’s brother, Bolat, and his ex-wife Maira Kurmangalieva, as did posh apartments on New York City’s Wall Street and overlooking Central Park.

A palatial, ocean-side estate on Spain’s Costa Brava owned by Timur Kulibaev, the husband of Nazarbaev’s second daughter, Dinara, has been a regular source of controversy, as local environmentalists have fought the estate’s efforts to close an access road. Nazarbaev has reportedly visited the property, known as Can Juncadella.

Several U.K. properties linked to Nazarbaev’s eldest daughter, Darigha, and her son Nurali have been the target of Britain’s National Crime Agency, which charged that the funds used to purchase the properties may have come from illicit sources. A court in April, however, dismissed those allegations.

Darigha also owns part of a block of townhouses on London’s famous Baker Street, whose acquisition was made using anonymous shell companies.

The father-in-law of Darigha’s other son, Aisultan, owns a luxury estate southwest of London, near a famous golf course, and hotels in the Czech Republic.

And Kulibaev’s purchase and renovations of the U.K. mansion once owned by Prince Andrew have drawn scrutiny from British newspapers.

And Kulibaev has also been tied to a historic property in Lugano, in southern Switzerland, and a semi-dilapidated spa on a hilltop overlooking the historic Czech spa town of Karlovy Vary.

Between 1991 and 2019, Nazarbaev was Kazakhstan’s singular political leader, holding an iron grip over the country’s political life and stamping out any rival attempts to challenge him.

The country’s prosperity grew substantially during that period, fueled by its large oil and gas reserves, but corruption and nepotism in the country became entrenched.

Kazakhstan ranked 113th of 198 countries on Transparency International’s corruption index in 2019 and was 157th on Reporters Without Borders 2020 World Press Freedom Index.