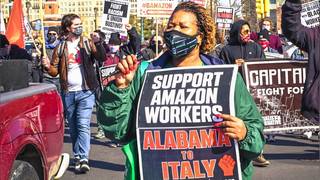 Amazon workers in Bessemer, Alabama, are in the final days of voting on whether to join the Retail, Wholesale and Department Store Union and become the first unionized Amazon warehouse in the United States. Ballots have been sent to nearly 6,000 workers, most of whom are Black, in one of the most closely watched union elections in decades. Amazon has fought off labor organizing at the company for decades, but workers in Baltimore, New Orleans, Portland, Denver and Southern California are now also reportedly considering union drives. “Amazon is trying to intimidate workers. They want them to be afraid,” says Stuart Appelbaum, president of the Retail, Wholesale and Department Store Union. We also go to Bessemer to speak with Michael Foster, an RWDSU member-organizer leading the union drive at Amazon’s warehouse, who says casting a ballot in the union election, amid Amazon’s attempts to discourage warehouse workers from supporting the union drive, is “the only way that we can allow our voices to be heard.” We also discuss how this week marks the 110th anniversary of the Triangle Shirtwaist Factory fire, the deadliest workplace accident in New York City’s history and a seminal moment for American labor.