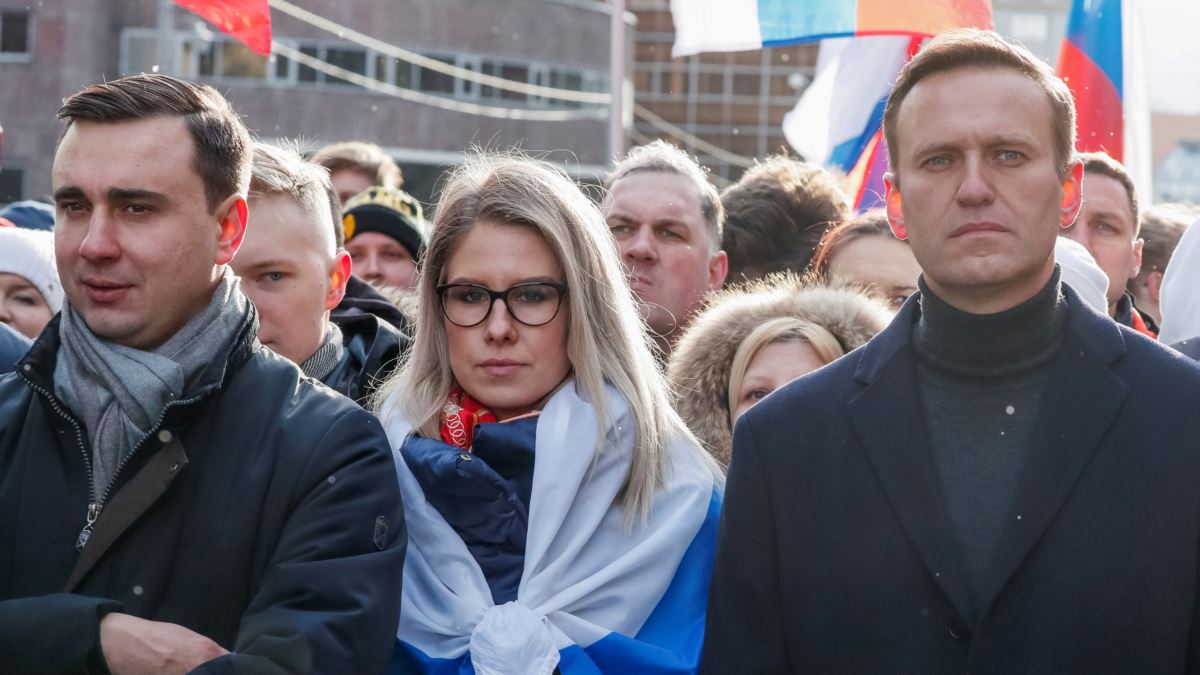 Lyubov Sobol, a prominent lawyer for outspoken Kremlin critic Aleksei Navalny’s Anti-Corruption Foundation (FBK), has said upon her release from detention that charges filed against her are “revenge” for Navalny’s survival of a recent assassination attempt.

“I believe that this criminal case against me is, firstly, revenge against Navalny, no matter how absurd it may sound, revenge on him for surviving after being poisoned with chemical weapons, revenge for his anti-corruption activities,” Sobol told TV Dozhd regarding the charges, which stem from her ringing the doorbell of a Federal Security Service (FSB) officer implicated in Navalny’s August poisoning.

“And since they cannot do anything with him now, they apparently decided to take revenge on me,” said Sobol, who proclaimed her innocence and called the charges “absurd.”

Sobol was detained by police on December 25 and taken in for questioning by Russia’s main investigative body, the Investigative Committee. She was questioned six times in relation to a criminal probe that was launched after a group of journalists and activists, including Sobol, attempted to speak to the FSB officer at his home on December 21.

The officer, Konstantin Kudryavtsev, had been identified as the apparent recipient of a recorded phone call from Navalny in which the anti-corruption activist’s poisoning was discussed.

Navalny had earlier on December 21 published an audio recording of the call, in which Kudryavtsev appears to believe he is speaking with a Russian security official and freely describes the circumstances of Navalny’s poisoning by a Soviet-era nerve agent.

A criminal investigation into Sobol trespassing “with the use of violence or a threat to use it” was launched following a complaint from Kudryavtsev’s mother.

Upon questioning, Sobol’s status was changed from a witness to a suspect, and she was charged under Russia’s Criminal Code. She faces two to five years in prison if convicted.

Speaking to TV Dozhd, Sobol said that the charges against her were also a warning to journalists who have covered Navalny’s poisoning.

“You — Dozhd television — have approached one of the poisoners [of Navalny], coming to his apartment and trying to take comments from him. I myself went to another apartment. CNN came,” she said.

“That is why, I think, they are really scared that journalists will now be asking questions of the people who have tried to kill Navalny. Through me, they want to intimidate journalists as well.”

Sobol posted a video on Twitter of police raiding her apartment on December 25, before going incommunicado. In the video, her 7-year-old daughter can be heard crying as someone pounds on the front door, demanding it be opened.

“They knock on the door and say the police are here. Apparently, the search will be at my home. I’ve never had a personal search before. Well, everything happens for the first time. Apparently, because I recently went to Navalny’s poisoner, ” Sobol says in the video.

Police searched Sobol’s apartment and her computers and phones were taken away, according to Navalny supporters.

Navalny has blamed President Vladimir Putin for his poisoning in Siberia. The fierce Kremlin critic and Putin foe fell ill on August 20 while flying en route from Tomsk to Moscow. After his flight was diverted to Omsk, where Russian doctors said they had found no trace of poisoning and placed Navalny in an induced coma, the he was transferred to a hospital in Germany.

Laboratory tests in three separate European countries, confirmed by the global chemical-weapons watchdog, have established that Navalny was poisoned with a nerve agent of the Novichok class.

Russia has rejected calls for an investigation into the poisoning, and denies the involvement of state agents in the case, saying it has yet to be shown any evidence. In October, Kremlin spokesman Dmitry Peskov accused Navalny of collaborating with the U.S. Central Intelligence Agency, an allegation Lyubov at the time called “complete gibberish.”

In a separate case, a Moscow court has ordered Sobol, Navalny, and the FBK to jointly pay a total of 87.6 million rubles ($1.15 million) in relation to a defamation lawsuit filed by a businessman with close ties to Putin.

Sobol announced earlier this year that she would run in Russia’s 2021 parliamentary elections.

Navalny remains in Germany, where he is recovering from the poisoning. He has said he plans to return home at an undisclosed date.

With reporting by TV Dozhd